The Man with the Iron Heart

Reinhard Heydrich was an SS-Obergruppenfuhrer, commander of the Reich Central Security Office (which controlled the Gestapo, the SD, and the criminal police); a presiding architect of the Holocaust, with authority over the Endlosung, or Final Solution, responsible for Kristallnacht, the Nacht und Nebel - Night and Fog - operation, and the Einsatzgruppen, special auxiliaries that followed regular Army units into Poland, Ukraine, and Russia, executing Jews and other political undesirables; and appointed Deputy Protector of Bohemia, military proconsul of Czechoslovakia, in September of 1941. Late that year, the Czech exile government in London mounted an operation to assassinate him. It had all the earmarks of a suicide mission.

Hitler himself called Heydrich the Man with the Iron Heart. He'd been sent to Prague because the Skoda works were important to the German war effort, and the Czechs needed to feel the crack of the whip. Heydrich considered them vermin. He had 92 people executed in his first three days. Over the next six months, 5,000 arrests.

British SOE train the commando team in Scotland, and insert them by paradrop. Making contact with what's left of the Czech resistance, the two team leaders, Jozef Gabcik and Jan Kubis, are persuaded the best solution to target is to ambush him on his way to work. They post a lookout along the route he travels, and lie in wait for him at a hairpin curve, on the road to the Troja bridge. Heydrich travels in an open car, a Mercedes convertible. It's a display of contempt, the Germans in complete control, the Czechs captive and demoralized. The car slows. Gabcik steps into the street. He's got a Sten gun. It fires from an open breech. The weapon fails to feed and jams. Gabcik is left standing there with his pants down. Then, unbelievably, instead of ordering his driver to put the pedal to the metal, Heydrich orders him to stop. Heydrich stands up in the back of the car, and pulls his Luger. Kubis, behind him, has an anti-tank grenade hidden in a briefcase, and he heaves it at the Mercedes.

(This was the No. 73 grenade, modified for weight, the bottom two-thirds removed, light enough to be thrown, but still able to damage an armor-plated vehicle. In training, Gabcik and Kubis both had trouble with it.)

The device detonates at the right rear quarter of the Mercedes - not inside it, but close enough to punch Heydrich with metal fragments and shredded upholstery. He staggers out of the car. The two Czechs try to shoot him with their own pistols and miss. Heydrich returns fire. Gabcik and Kubis take off in opposite directions, thinking the attack's a failure. Heydrich starts to chase them, and then collapses from internal hemorrhaging.

They got him pretty good. Severe injuries to his diaphragm and spleen, collapsed left lung, fractured rib. Surgeons labored over him, and the prognosis was hopeful. A week later, Heydrich was sitting up in bed for lunch, and then suddenly went into shock. Apparently, septicemia caught up with him. He died the next day.

Reprisals were brutal and immediate. Cooked intelligence from the Gestapo led to the village of Lidice. All the males over the age of 15 were shot, the women and children sent to the death camps. The town was burned and then bulldozed. In the smaller village of Lekazy they simply shot everybody, men and women alike. The actual pursuit of Gabcik and Kubis and the people who'd helped them hit a wall, until a guy on one of the other sabotage teams ratted them out for the Judas money.

The seven of them were holed up in the Orthodox cathedral of Saints Cyril and Methodius. It took the SS two hours to smoke them out, with 750 men. Fourteen dead, twenty-one wounded. None of the Czechs let themselves be taken alive. They knew too many names.

As always, you want to ask whether the blood price was worth it. Heydrich was a reptile, better off dead. But it's estimated as many as 1300 people were murdered in direct retaliation. Also, it appears that the schedule agreed to at the Wannsee Conference was accelerated after Heydrich's death, implementing the extermination camps, as distinct from slave labor. Then again, how many people might Heydrich have eliminated, if left alive? He was an effective coordinator of terror logistics. And efficiency in this, as in other things, solidified his power base. He could have made the trains run even faster.

One last thing, a net gain. Heydrich was the most senior Nazi targeted in an operation under SOE discipline. (Or any other clandestine service, either. Wilhelm Kube,  the generalkommissar of Minsk, had a bomb go off underneath him on NKVD instructions, but Kube was small potatoes compared to Heydrich.) Yes, they were Czech partisans, although they jumped out of an RAF Halifax bomber, so in that sense it was deniable. In fact, SOE didn't want to deny it. Just because they never tried for Hitler doesn't mean it was never discussed. The killing of Heydrich was an object lesson. 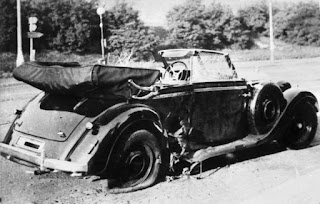 Good history lesson. I posted earlier about my friend's book, THE HEYDRICH DECEPTION by Daniel Savage Gray, which showed Heydrich's acumen for detail.

I remember reading how some in the intelligence community in the US and Allies were reluctant to assassinate Hitler because a cardinal rule of high level assassination is if the next guy is a better leader or better military commander, then don't assassinate someone like Hitler. I believe many in the US were fearful the German military would take over. The Wehrmacht and Kriegsmarine were more formidable than the Nazis. It applied with Admiral Yamamoto in the Pacific. The US did not hesitate to assassinate him because no Japanese admiral was better. Going with that theory - no one was worse than Reinhard Heydrich.

Really informative piece, David. And I agree with O'Neil -- I doubt there was anyone worse than Heydrich. As to the question of would more or less people have been killed had he not been assassinated I guess we can never know. But as with the Doolittle Raid, which didn't do all that much damage, I suppose sometimes you just have to show that you can hit them at home for psychological reasons.

What terrible decisions to have to make. All the resistance movements in WW2 and probably every other war have had to weigh the costs of action against acceptance.

Fascinating bit of horrific history there. Personally, I think some of the best resistance in history involved infrastructure rather than assassinations - cut the supply lines, the communication lines, etc. Tremendously bothersome (and tedious), but leading to less fatal reprisals, i.e., massacres of civilians.

O'Neil makes an excellent point. The Little Corporal remained convinced of his superior military stratagems, even when they began to fall apart. Hitler executed some of the most experienced military leaders on his rise to power.

Heydrich was one evil bastard. He died too easily.