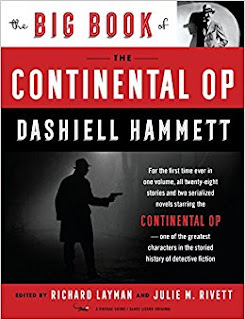 Over the last couple of months, I've been reading aloud to my wife Tara the stories in The Big Book of the Continental Op, the first print collection ever of all of Dashiell Hammett's stories featuring the unnamed detective. We've read fifteen of them so far, and as I write this, we're about three-quarters through the novelette "The Whosis Kid"—and on the edge of our seat each time someone new comes through the apartment door with pistol(s) in hand! (The room's getting crowded now, with the Op and five other people all vying for space to maneuver.)

Our readings stem in part from a New Year's resolution to read the whole collection this year—rereading stories in some cases—and the title doesn't lie, it's a big book, and it's a mammoth achievement too, thanks to the hard work of editors Richard Layman and Julie M. Rivett, Hammett's granddaughter. But I've been interested in Hammett and particularly the Op stories long before, even having taught some of them in my classes at George Mason University, and I was thrilled with the earlier gathering of these stories in an e-book series.  (See my 2016  SleuthSayers interview with Rivett on that project.)

I've read some of these stories before, as I mentioned, but some—even some well-known titles—I'm enjoying for the first time. And what's struck me at several times is how Hammett used the short stories as a testing ground for ideas, characters, and scenes.

I've said before—and will argue again (and again)—that short stories can't fully be apprenticeships for writing novels. While writing short stories can help writers learn some of the fundamentals of crafting characters and shaping scenes and sharpening dialogue, etc. But the short story and the novel are two vastly different forms, with different requirements and different challenges. The leap isn't entirely a natural one, and I've talked to as many fine novelists who say they've never been able to write a short story as I have with fine short story writers who've struggled to complete a novel. 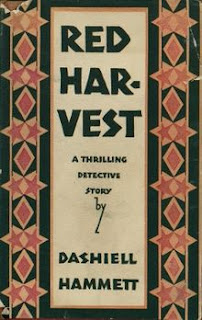 That said, however, I've also written before about Hammett's own transition from short story to novel—with his first two novels loosely put together as novels in stories with the seams smartly covered up. Both Red Harvest and The Dain Curse appeared as serialized stories in Black Mask, each installment with its own narrative arc, even as the fuller narrative arc emerged only in the connecting of the story cycles. I've written about this before too; see my essay here for the Ellery Queen's Mystery Magazine blog. And one of the things I'm most excited about in the new Big Book of the Continental Op is seeing those story cycles in their original forms: "The Cleansing of Poisonville," "Crime Wanted—Male or Female," "Dynamite," and "The 19th Murder," which became Red Harvest; and "Black Lives," "The Hollow Temple," "Black Honeymoon," and "Black Riddle," which became The Dain Curse. In these cases, it's not just that Hammett used the short story as a training ground for the novel but that he used the architecture of the short story as the building block for the larger structures.

Beyond those specific stories and those specific novels, the early stories in the new collection have been opening up new perspectives on Hammett's artistic process—exciting discoveries for me, even if others have likely written on them elsewhere. Take, for example, that scene from "The Whosis Kid" I mentioned above. The Op and a woman named Inés Almad and a guy named Billie are together in her apartment; then in comes the Frenchman Edouard Maurois and a fellow with a big chin (appropriately called Big Chin); and at our last stopping point the title character steps in, a black revolver in each hand. What everyone's doing there—well, neither the reader nor the Op know at this point in the story, but the Frenchman seems to be looking for something that Inés is supposed to have—and that she claims she doesn't but the title character does. And all through the scene, I couldn't avoid thinking about Sam Spade, Bridgid O'Shaugnessy, Joel Cairo, Casper Guttman, and Wilmer Cook all crowding together in that pivotal scene in The Maltese Falcon. (Again, we haven't finished "The Whosis Kid" yet, but I'm thinking things don't look good for Inés here.)

Similarly, reading "The Golden Horseshoe," about the Op's hunt for missing Norman Ashcraft, who left his wife and disappeared, how could I not think of the famous Flitcraft Parable—and not just because of the echo between the names. That story from The Maltese Falcon—a digression that's been discussed and argued over endlessly—gets an earlier treatment here as a case itself, and it's fascinating.

Elsewhere, in "The Girl with the Silver Eyes," Porky Grout (what a name!) seems a prototype for  characters in later stories and novels. (On a side note, I just read this New York Times review of the 1974 collection The Continental Op, which focuses on Porky Grout—and I disagree with the take here. In recent conversation, Peter Rozovsky mentioned Porky and talked about the story's moments of real emotion, a glimpse inside the Op's feeling—so true.)

And then beyond plot and scene and character, I've also found myself marveling as seeing Hammett's style evolving—and his boldness about his writing. Even in a very early story, "The Tenth Clew," he includes a chapter that seems more impressionistic, certainly less plot-driven, with the Op floating in San Francisco Bay, horns blowing around him, swimming, trying to survive. It's a marvelous passage, and one that another writer might simply have skipped (or another editor might simply have cut).

In short, reading The Big Book of the Continental Op has delivered not just some fine, fun stories, but also significant glimpses both into the evolution of an artist and into the process of artistic creation. Still many stories to go—and the rest of the year to read them!—and looking forward to them all.

Since my last post here, Malice Domestic has updated its website with links to all of the finalist for this year's Agatha Award for Best Short Story. You can find them all here.