by Paul D. Marks
A weird thing happened the other day. It’s not a unique thing. It’s not something I’ve never done before—in fact I’ve done it many times. But quite honestly I don’t do it as often as I used to (get your minds out of the gutter here).

I went to a bookstore. And it was almost a revelatory experience.

Now, I have to admit it wasn’t a quirky little independent bookstore. It was a Barnes and Noble. And it was a wonderful experience. The feel of the books. The ability to read the jacket flaps. To see books on display that I might not come across online. And while checking out the clerk had some interesting things to say about one of the books I was buying, A.J. Finn’s The Woman in the Window.

One of my favorite pastimes is meandering through bookstores. And I'm not a snob about it. I like both the big chain stores and the small independents. Each has strengths and weaknesses. The independents often carry a more eclectic stock or are sometimes dedicated to a single genre, such as mysteries. Their staffs are usually more knowledgeable and well read. The big box stores often have more variety and selection.

But either way, I look at going to bookstores as a social experience. Even if I say no more than "Hello" and "Thank you" to the clerk checking me out, I have a social experience with hundreds of authors and books. And that “hello” is more than I get when shopping online.

Also, on the social level I’ve met women I ended up dating at bookstores (before I was married, of course!) and have seen authors I like do signings and readings. Check out a James Ellroy event some time if you want to see insanity in motion. And I've done signings and speaking gigs at bookstores myself.

I like bookstores that stay open late. That I can run to when an urge for something in particular strikes at an odd hour—and I keep pretty odd hours. It was a place to go. A destination. Before moving out of the city proper (Los Angeles) to a more rural area, I would often hop in the car at all hours to go find a book to satisfy my addiction. But from here, everything is a trek.

But that's getting harder and harder to do, even in the city as there are less bookstores. And yes, I also patronize Amazon, so in that sense I’m part of the problem. But I also still patronize brick and mortar bookstores when I can. And there is nothing like browsing through one, discovering new books and authors. And that’s what it’s all about: Discovery, with a capital D. Whenever I see a bookstore, I want to go in. Whenever I go in, I buy at least one or two things, hoping to help keep the stores afloat and also just cause I like books. And if you saw our house you’d know what I’m talking about. Books everywhere, including on shelves in the garage.

Before my mom got sick for many years, we would often go to lunch and then to a bookstore together. We’d peruse the aisles, not always the same aisles, and both of us would leave with armloads of books. That’s one of my fondest memories of her.

Unfortunately, all those Westwood bookstores are gone now.

Other specialty stores that are still with us include, Larry Edmunds for film and TV books and Samuel French that specializes in theatre books.

Back in the day, on Hollywood Boulevard near Grauman’s Chinese Theatre and definitely worth the trip, was Pickwick Books, three stories of book lovers’ delights. And way back in the day, Fitzgerald, Chandler, Faulkner, Bogart, Marlene Dietrich and many other celebs would haunt this place. Though I’m sure F. Scott wished he hadn’t one time. He went into the store and asked if they had The Great Gatsby by one F. Scott Fitzgerald. The clerk told him, “We don’t stock the work of dead authors on this floor. You’ll have to try upstairs [where used books, bargains and the like were kept].” The clerk later said, “I didn’t even recognize him and it’s been making me sick ever since. Especially since he died shortly after that. Another customer who knew him told me my not recognizing him and thinking he was dead had a catastrophic effect on him.”

There were also used book stores (and still are). Down in Long Beach was Acres of Books, a mere 12,000-square-feet. I went there several times but it was a bit of a drive. Closer to home and one of my faves was Book City on Hollywood Boulevard. Partly because of the books and partly because they had one of my favorite pix of the Beatles outside (see pic). They would order hard to find books for me and always came through. And in West Hollywood was the very independent George Sand Books. A small store that held a lot of readings. And even as I put the polish on this piece another one bites the dust: http://www.latimes.com/local/california/la-me-caravan-last-chapter-20180301-htmlstory.html

Even most of the mall bookstores are gone. Dalton’s and Walden. And Crown Books. It was always good when I had to go to a mall for one reason or another to be able to duck into a bookstore and pick up something.

There’s still bookstores, of course, though maybe not as many. But hopefully things will shake out and people will want the human and tactile experience of going to bookstores.

I was thinking about including a list of now-gone bookstores, but for many of you, especially outside of LA it wouldn’t really mean anything. Suffice to say there’s a ton of them. But there’s also a bunch (both new and used bookstores) still around, so if you’re in LA you might want to check them out. But remember L.A. is very spread out and even though some places might seem close to one another they might not be. And if I’ve left any off this list, I’m sorry, it’s not intentional:

So, tell us about your city’s bookstores (now and then) and your favorites.

I’m happy to say that my story “There’s An Alligator in My Purse” has been selected for the 2018 Bouchercon anthology, Sunny Places, Shady People, edited by Greg Herren. I’m pleased to be included with fellow SleuthSayers Barb Goffman and John Floyd. 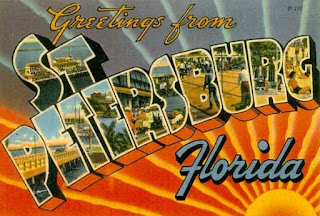