by Eve Fisher
Ah, March is almost over, and with it March Madness.  Look, I'll be honest, I'm not a basketball fan to begin with, plus, on PBS, it's also "Festival!", which really cuts a hole into some of my favorite viewing.  But - note to all ultra-conservatives who wonder why a GOP Congress never quite manages to cut all Corporation for Public Broadcasting funding?  Because out here in fly-over country, what station runs ALL the high-school and college basketball games, morning, noon and night, on all 3 PBS channels, for as long as they last?  Not to mention high-school track & field, and football playoffs?  PBS, not Fox News, CNN, or even ESPN.  You think people want to give that up?  No, they do not.  They want to see their kids, grandkids, and themselves on television.  The most conservative among them can easily ignore the PBS NewsHour in exchange for that, quilting, cooking, and travel shows, "Call the Midwife", "Father Brown Mysteries", "Nova" and Daniel O'Donnell specials ad infinitum.  Oh, and "Antiques Roadshow."

Meanwhile, we had volunteer refresher training at the pen this month.  This year we learned a lot about prison gangs and their tattoos.  We have a variety of gangs in the South Dakota Prison System, but they're not what they are on the east / west coasts. 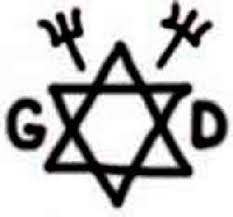 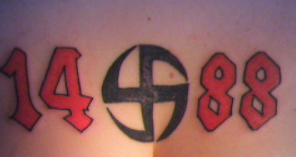 It's a whole language.

Speaking of language, I loved this "correction" of the New York Times tweet about the Austin bomber:

I totally agree.  White boys/men who shoot up theaters, schools, or musical venues are all crazy, or quietly challenged, and/or from a broken home, and/or a good family, and therefore, there's nothing to be done except make all the white boys/men around us feel really good all the time so they won't shoot us.  (Or rape us - I'm still pissed off about Brock Turner getting probation because he was such a good swimmer with his whole life ahead of him.)  I call BS on that.  Simply put, anyone who's going around bombing random (or was it random?) American citizens, setting trip wires, etc., is a terrorist.  Period.  I don't care how "troubled" or "challenged" their life is.

Back in October, 2016, then candidate Donald Trump said “These are radical Islamic terrorists.  To solve a problem, you have to be able to state what the problem is, or at least say the name.”  Well, the Anti-Defamation League did a study and found that white supremacists killed twice as many as Islamic terrorists in America in 2017.  And that the numbers of white supremacist attacks are increasing around the country.  (ADL Report)   So, everyone, say it with me:  "Radical white supremacist terrorism."  Like 150+ years of the KKK.  (I can't believe that in this day and age I still have to say that the KKK and the Nazis are bad.)

BTW, ironically, as a Boston Globe article points out, being white doesn't protect you from white supremacist terrorism:  "The victims of white supremacist terrorism are often white....  the carnage of white supremacist terrorism should have been understood after the 1995 Oklahoma City bombing, where Timothy McVeigh killed 168 people of all colors. Fueled in significant degree by racial hatred, McVeigh was a devotee of The Turner Diaries, a white supremacist novel that imagined an American race war so grotesque that white women were hung for marrying African-Americans and Jews.  The carnage should have been understood after the 1999 Columbine High School massacre in Colorado, carried out by Dylan Klebold and Eric Harris. The two teens adored Adolf Hitler and were reported to have routinely used racial epithets. Yet most of their 13 victims were white."

Language matters.  How something is said influences more than we know.

I read on Facebook a story about a guy who asked a girl out on a date at high school.  The girl said "No, thanks" and walked away.  The guy grabbed her by the arm and said, "Come back here -" so she turned around and punched him in the nose.  Well, everyone came running after that.  The principal wanted her to apologize and he was going to suspend her.  The girl told everyone there, "Look, my mother taught me to never put up with someone laying hands on me when I don't want them to.  That I have the right to say no.  And now you're telling me that this jackass can grab me to make me change my mind?  Fine, suspend me.  But what you're doing is tell girls that we don't have the right to say 'no'."

I'm with the girl all the way.  Because, when you follow that logic - that the girl should have been nicer to the man who grabbed her without her permission - what can happen is this:

"Lovesick teen" a/k/a "heartbroken homecoming prince" - kind of perpetuates the idea that a girl can't say no, doesn't it?  That a girl shouldn't say no, because... she might make him so angry that he shoots her in the head?  And somehow she's in the wrong, because he's "lovesick"?  That somehow he has the right to kill what he can't have because of his emotions?  Jaelynn Willy was 16 years old when this possessive bastard shot her in the head.  She died three days later.  (See Jezebel for a much less "romantic" telling of this story.)

Meanwhile, 55% of female murder victims are killed by their domestic partner.

Up to 75% of abused women who are murdered are killed after they leave their partners.

The majority of the victims were under the age of 40, and 15 percent were pregnant. About 54 percent were gun deaths.

Still, loopholes in gun laws mean that abusive spouses and partners often can keep their guns, even if they can’t buy new ones. And the consequences of those loopholes, for women, can be deadly.

Especially in the hands of a "heartbroken homecoming prince."