by Thomas Pluck
"You don't have to write." --Lawrence Block

That's from LB's "tape" (now available as a digital file) of writing affirmations. I bought it for the hell of it after reading his excellent and helpful book Write For Your Life, which I also recommend. I love it because I get to hear my literary hero tell me how great I am for an hour, but he also says that I don't have to write. In the beginning, I questioned the wisdom of such an affirmation. For those with anxiety, it is a godsend.

This is my favorite author photo of LB, from the affirmation tape:
You do not have to write.

The world will keep on spinning. The only person who will beat you up over it is yourself. The anxiety of that appointment with the writing desk can crush you, and that's what the affirmation is meant to counter. Just sit there and fart around and some words are sure to come out. (Along with a certain amount of flatus). Joe Lansdale has more of a tough-love approach with it. If you don't have to write, don't. Don't bother us with your scribbling if this is something you're doing because someone else says you ought to write a book, or you think it might be "fun." If you're driven, then you will write.

I let a book sit for two weeks. The same book I was chunking along with since winter began, the one I hit 65,000 words with in record time, came to a halt for a number of reasons. I got the flu. Work projects ate up my sleep, and I need a good night's sleep to operate. And then I let the anxiety creep in. I started worrying about how good the book would be, which is poisonous to a first draft. You can fix it later! I had a framework and an outline, I knew the scenes I needed to write, but the path to get there became a twisty maze of passages all alike. I even used that line in the book! (If you're not an old nerd like me, it's from Zork and Colossal Cave, two of the first text-based computer games written in the '60s.)

So to put it mildly, I was in a funk. A capital F Funk.

Which reminded me of my friend Matthew C. Funk, a once prolific crime writer who seems to have all but stopped writing. Which is a damn shame. Matt excelled at the hardest boiled stories from the Desire projects in New Orleans, and police stories set there. His stories were short and sharp, like a hideout punch dagger to kidneys. The last I'd heard he had a novel whose publisher went belly-up, and it hasn't yet found a new home. Which is a shame, because I'd really like to read City of NO, as it was called when Exhibit A had it. I reached out to Matt but haven't heard back yet. You can read some of Matt's stories at Shotgun Honey. Matt was also an editor for Needle: A Magazine of Noir, and helped me edit my early Jay Desmarteaux story "Gumbo Weather," which attracted the attention of agent Nat Sobel, and the story later appeared in Blood on the Bayou for Bouchercon 2016 in New Orleans.

I know another writer who seems to have stopped after that imprint shuttered its windows, and it is a damn shame. They are both fine writers and the genre is lesser without their perspectives. Last night, an hour before we went to see A Wrinkle in Time--more on that later--I sat down and banged out half a chapter of my sprawling Louisiana novel, returning to the part set in Angola prison, and damn it felt good. The characters felt alive, and I felt proud to have given them brief life on the page.

I wonder if it was LB telling me I didn't have to, or my fear of meeting a similar fate if my publisher collapsed, or if it was Champion Joe Lansdale's Texas boot kicking me in the patoot that made me write when I thought there was no point to it? Or was it the freedom of not having a point?

Then again, as Harry Nilsson taught me, everything has a point. Even Oblio, the one kid from Pointed Village who was born without a point on his head, on his wonderful children's album, aptly named The Point!. Listen to it if you haven't. You may know the songs "Me and My Arrow" and "Think About Your Troubles", which had some success. Arrow is Oblio's pointy-headed dog, who jumps on his head so he can play ring-toss with the other kids. See, they toss rings and catch them on their pointy heads.... see the trippy animated movie, if you don't believe me! 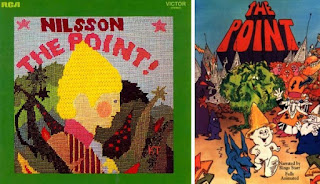 Listen, it was the seventies. This made sense then. Or we pretended it did. My father, a burly construction worker who made Andrew Dice Clay's parody character seem realistic, loved this album. After he died, I listened to his vinyl copy, and while it's simplistic, it does have a point. Everything has a point, nothing is pointless. Writing this book doesn't have to have the purpose of creating a great follow-up to Bad Boy Boogie. It could be a learning experience. I'm weaving four narratives, and it is both invigorating and challenging, and even if I fail, I will have become a better writer in the process. So that's the point.

Depression, and "funks"--as I like to call non-clinical depression--are insidious. The clinical kind, you can only try to head off. Most people need medication and therapy and I won't diminish their struggle. Anxiety, which I have, is bad enough. But funks can be battled. It's not a fight, and you're not weak when you fail. You need to learn yourself, and see when they are coming, and do what you can to derail them or ride them out. I know that I feel better when I write on a schedule, but sometimes the story needs to simmer, and it's not ready to move on. For me, sitting at the desk and listening to music that goes with the story, or going for a walk--tough in the weather we've had lately--are both tools I use. When I go for a walk WITHOUT MY PHONE I am often amazed how story problems shake loose as I tread the uneven slate sidewalks of my "quaint" town. I like hikes as well, and Eagle Rock's trails will get more of my tracks once the snow melts.

Watching good movies and reading good books helps as well. I liked Black Panther and Annihilation. The former is just a good superhero and science fiction story that makes you challenge your assumptions. It's less violent than most--they use EMP weapons and hand to hand more than firearms, thanks to bulletproof vibranium armor--and is one of the best comic book movies out of the enormous bunch. And it's an origin story, so you don't need to have seen any other movies or read the books to enjoy it. Just plain good storytelling as well. Begins in media res, explains just enough, and ties everything together. The villains even have a point, no one is all good or bad, and there are a lot of characters to love.

Annihilation is more of a horror tale than science fiction. It uses the investigation of a terrifying anomaly to explore what it means to be human, and if a human being ever really knows another, which is one of my favorite subjects. It's beautiful, scary, entertaining, and puzzling, but if you don't like ambiguity... it may not be for you. It is more like Predator than 2001: A Space Odyssey and introduces humanity to terrors we can barely understand and cannot fight or control, so Lovecraftian with a dose of Crichton. I was expecting a story more like Arrival so it took some processing for me, but if you go in with the right expectations, you will be satisfied. And it is a movie we will be talking about for a long time.

The most polarizing film of late seems to be A Wrinkle in Time, which I loved. I have not read the books. I went in cold, and if you didn't like the changes made from the books, I can't argue with you. On its own, I found it beautiful and inspiring, and one of the best explorations of how a child deals with low self-esteem. It reminded me of Wonder Woman in a small way. When Diana walks up the ladder out of the trenches into No Man's Land, a lot of us burst into tears of joy. She was an outsider who refused to accept this is the way it is and her actions were the response, they are that way because you permit them to be. If you go in cold and accept the story at face value, Wrinkle will give you many, many such emotional moments as young Meg overcomes her self-doubts. It struck a nerve with me, because while my father didn't vanish into a wormhole, my parents did divorce when I was seven, and it was a personality-altering event. I became a mouse. Look at me and you wouldn't believe it, but it took years of physical and emotional training to break out of my introverted shell, and I still find parties about as fun to navigate as whitewater rapids.

The story is for children and throws no bones to adults. It never winks at the camera. You will either accept Oprah as a towering goddess of light or you won't. I chose to accept, and found it very rewarding. Chris Pine (Dr Murray), like everyone in the movie, is completed unabashed in their emotions. We are used to unabashed cruelty, but seeing that applied to wonder, joy, love, doubt... we often see it as mawkish, thanks to the "cool" factor that Madison Avenue has told us is paramount to protect our weak inner selves, preferably with a costume of expensive clothing and accessories, maybe an Omega Seamaster? I thought he was excellent, he reminded me of a cross between Fred Rogers and Carl Sagan. The villain is a childish and hateful universal force, and Ms. Which (Oprah) describes how it bends us toward evil so perfectly that it choked me up. We are all little children, sometimes. We just get better at hiding it.

The only movie I can compare it to is What Dreams May Come, which was also beautiful and unafraid to talk about love. It was also mocked for it. We've been fed bitter and cynical pablum for so long we can have trouble experiencing wonder. Cynicism is easy; if you can't win, why fight? Because fighting it is the point.

See how I tied all that up there?


P.S., You can listen to the full album of The Point! on YouTube before you go buy it.
Posted by Thomas Pluck at 00:00