Vancouver Author Sam Wiebe Talks About "Cut You Down"

For today's blog entry it's my pleasure to introduce to you Vancouver crime writer Sam Wiebe. I first met Sam at the 2015 Left Coast Crime conference in Portland, Oregon. We bonded over similar tastes in literature, music and film, and have been pals ever since.. He's coming to the Seattle area next month and appearing in support of the release of a new book entitled Cut You Down.

Now, it's always nice to meet a fellow traveler who makes the same sort of "art" that you make. It's even nicer when the art that fellow traveler produces is the sort of first-rate stuff that Sam Wiebe produces. So we're not only friends, I'm also a fan. Naturally I thought it would be nice to highlight Sam and his work in a blog post in advance of his appearance here next month. He graciously agreed, and the end result you see below. My questions are in bold face.

First, a bit about Sam:

Sam Wiebe was born in Vancouver. He has held a variety of odd jobs, earned an MA in English, published Last of the Independents (2014) and Invisible Dead (2016). His latest is Cut You Down. He has published short stories in Thuglit, subTerrain and Spinetingler, in addition to collecting and editing Akashic Books' forthcoming anthology Vancouver Noir. 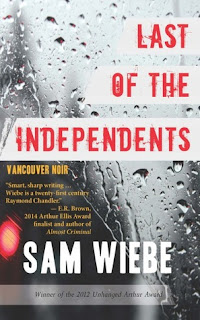 First, loved both your first novel, Last of the Independents, and your first Wakeland novel, Invisible Dead. Can you comment on how you changed up protagonists between your first and second novel, and let our readers in on why you had to do that?

Thanks! I look at Last of the Independents as my "demo tape." There are things about storytelling I was working out, and not to give away the ending, but that book wraps up Mike's story pretty well. The tone of Invisible Dead was a bit more complex, a bit more grounded in Vancouver history, and I wanted a protagonist who would reflect that. Dave Wakeland is younger than most private eyes--in Cut You Down he's just turned thirty. He was briefly a cop, and spent his youth boxing out of Vancouver's Astoria Gym. In some ways he's a throwback to classic PIs like Lew Archer and the Continental Op, but he's also a young guy trying to make sense of a rapidly changing city. I think of him as the flawed but beating heart of Vancouver.

In your second novel, Invisible Dead, you took what could have been just another depressing missing persons (in this instance the "missing person" being a First Nations–that's Native American for those of us reading this in the States–prostitute named Chelsea Loam) story and really worked it into a superb commentary on the human condition. I felt like we all know a Chelsea Loam, or many Chelsea Loams. And yet she's also such a cypher. How and when did this idea hook you? 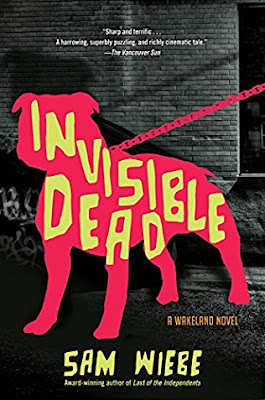 I started writing Invisible Dead during the Oppal Commission hearings into the disappearance of hundreds of murdered and missing women, disproportionately low-income, First Nations, and minorities. It's a fraught topic, and it often centres around the serial killers rather than the systemic forces that make people vulnerable. Those hearings were shaped by a very limited narrative of who got to speak and who was to blame. I knew I wanted to write a book that contradicted that. I focused on the disappearance of one woman, Chelsea Loam, as a way to discuss the culpability we all share for allowing people in society to be rendered invisible.

And it's a theme you have clearly continued to work with in your new book, Cut You Down. So tell us about this new novel of yours.

Cut You Down is the second novel about Vancouver PI Dave Wakeland. He's tasked with finding a missing college student who's mixed up in a school scandal, and who was last seen with a group of suburban gangsters. Adding to that, an ex-girlfriend, police officer Sonia Drego, asks Wakeland to check into the background of her partner, a troubled cop who's been acting strange. The book moves from a rapidly changing Vancouver, to the wilds of Washington State, to a suburban gangland where things aren't what they seem.

I was struck by the outsized role played by the city of Vancouver (and its environs) in Invisible Dead. Setting is a crucial, and all-too-often underutilized, part of fiction. So many great writers have made effective use of setting, rendering it so vivid and affecting that it frequently acts almost like an additional character in their work. Thinking of Dickens' London, Saul Bellow's Chicago, Chandler's Los Angeles, Hammett's San Francisco, David Goodis with Philadelphia, and so on. I feel like you've done a great job of channeling Vancouver in much the same way. Was this a conscious choice on your part, or did it sneak up on you?

It was conscious. A big part of that novel was the disconnect between how much I love Vancouver and how horrific some of the things that go on here are. I always liked the way Ian Rankin handled those sides of Edinburgh--the tourist side and the resident side, the rich side and the side for everybody else. Vancouver is heartbreaking in that way. Cut You Down builds on that disconnect even more, getting into gentrification and displacement, and the lengths people will go to maintain their standard of living.

And Vancouver isn't the only changeable element to this series. Wakeland himself seems far from static:. How did Wakeland change for you this go-round?

He’s forced to deal with more of his past—when his police officer ex-girlfriend asks for his help, it drags up both their relationship, and his brief career as a police officer. Trauma and violence and long buried secrets—he’s got his work cut out for him. 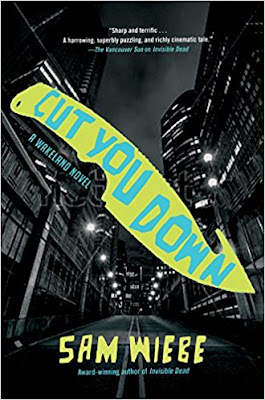 Writing a follow-up to a successful first book is always challenging, in ways writing that first book (a challenge of its own) aren't. Can you walk us through some of these challenges specific to Cut You Down?

Sure. Invisible Dead was a case where I knew the story early on, and the revisions honed that. It’s tighter and better than the first draft, but pretty much the same book.

With Cut You Down, there were a lot of things I discovered during the revisions. It changed drastically, and that process enriched it. For example, the suburban gangsters The Hayes Brothers were introduced late, but I love the element of menace they inject, and the fact that they mirror both Wakeland’s and Tabitha’s stories, as young people trying to make sense of a world where the rules of their parents no longer seem to apply. They’re kind of broken versions of Dave—as he says, what he might have been like if he’d had a few more advantages in life.

Music plays such a huge part in your writing. You're obviously a musician. And you're from a pretty musical family, too, right?

I was a drummer--not sure if that counts as a musician or not! My dad was a studio and club guitarist around Vancouver, playing on the Irish Rovers television show and with the Fraser MacPherson Big Band. He still plays jazz gigs around town.

You know the old joke about what the definition of a drummer is, right? “A guy who beats on stuff and hangs out with musicians”?

I think my favourite is, "How can you tell a drummer is knocking on your door? The knocking speeds up."

Reading your book called to mind the work of the great Irish writer Ken Bruen, who leavens his fiction with musical reference after musical reference, some relevant to the plot, some just shout outs to what the author considers great music. You do a fair amount of this as well. Did these references creep into your work or is this something you've consciously developed?

It's a way to add a sonic element to description, and to give a snapshot of someone's character. I also like throwing in shoutouts to bands from the Pacfic Northwest--in Cut You Down, there are references to Mad Season's Above and NoMeansNo's Small Parts Isolated and Destroyed, among others.

For those of our readers in the Puget Sound area, Sam will be appearing in our back yard in just a few weeks. He's going to read from his new novel on Monday, March 12th, 7 P.M., at Third Place Books in Lake Forest Park You can get more details here).

And that brings us to our last question: Will copies of your other books be available as well?

Third Place will be selling books, and yes, they’ll be in stock! 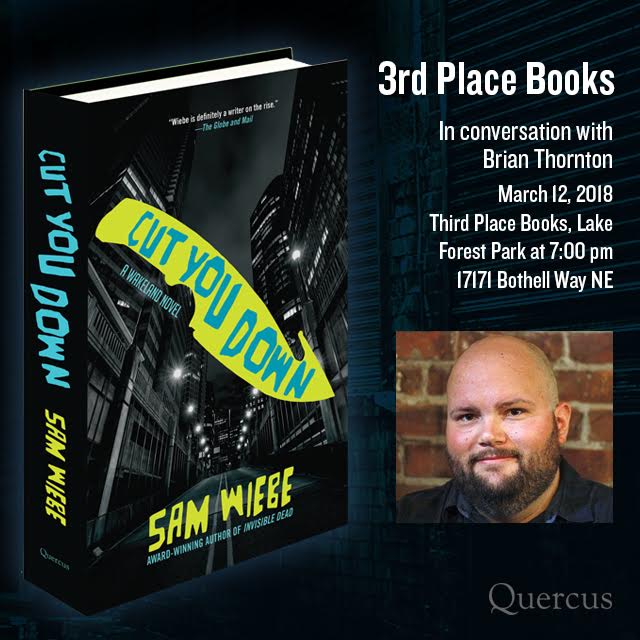