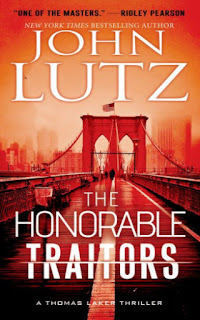 In Laker’s case, it’s a beautiful and brainy NSA codebreaker named Ava North. The secret she brings him that is too hot for anyone else to handle concerns not her work but her family. The Norths have been Washington insiders for generations. The beginnings of the story of The Honorable Traitors go all the way back to World War II, but its unimaginably violent final act will take place in the future… the very near future.
Posted by mystery guest at 00:00