With any luck, my husband and I just got back from a much-needed vacation, so here's an update from my friend Linda Thompson. She wrote this letter to a mutual friend of ours who lives in New York City, who likes to keep informed about life in Laskin, South Dakota...

...Every summer as you know, a friend of mine goes on a dig with a group of archaeologists.  I've suggested that he could find really interesting things by staying in town and excavating my garden, but he just laughs.  He has no idea what can get buried in a small town.  Remember when Mary Olson killed her husband?  That asparagus bed's still pretty lush...  (I know, I know, it was never proven he was ever buried there, but you can re-read all about that here in "The Asparagus Bed".)

But the truth of the matter is, my friend only interested in dinosaurs.

Of course, America's been dinosaur-happy for a long time.  I was, too, once, but I got over it when I learned that birds were direct descendants of dinosaurs, which sounds sillier in a book than it does watching a flock of pelicans.  Pelicans are 30 million years old.  Pelicans are sharks with wings.  In flight they look like large albino pterodactyls, and I'll bet they'd whip the pants off of any leather-winged pterosaur stupid enough to not be extinct.  On the water, they patrol the lake with the same carefree approach of prison search-lights on a moonless night with bloodhounds baying in the background.  If I were a fish, they'd give me a heart attack.  As it is, they just give me the willies. 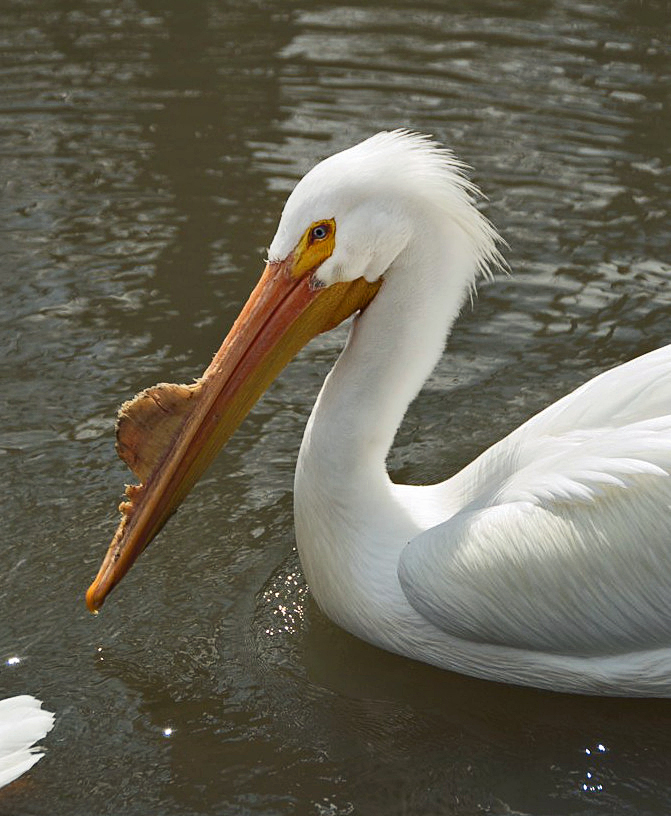 Of course, once you start observing things like that, you can't stop.  At least, I can't.  I started watching the crows and flickers stalking my yard, head cocked, one eye staring cold and unblinking down at the ground until they spot their prey.  Maybe I saw "The Birds" too young, along with "Psycho" and "Marlin Perkins' Wild America", but I believe birds spook more people than me:  why else would carry-out fried chicken be available in every convenience store in America?  It's our way of reassuring ourselves of our place on the food chain.

The reason I'm able to make all these observations is that my yard is the neighborhood wildlife sanctuary.  Besides the birds, a tribe of rabbits comes and frolics on my lawn every night.  This isn't because I leave out little nubbins of carrots and pretend that I'm Beatrix Potter.  It's because I have the only chemical-free lawn on my block, full of dandelions, clover, and creeping charlie.  (You can imagine how popular I am with my neighbors.)  The rabbits love it.  They eat and gambol and do all the things that rabbits do.  They must stay up all night doing it, too, because morning always finds a couple of them sprawled out on the grass like limp cats.  Sometimes a cat is sprawled out like a limp rabbit, not five feet away.  Who's imitating whom, I don't know.  All I know is that they're all too tuckered to move.

Now I don't mind the rabbits eating all the clover they can hold.  I'm certainly not going to eat it.  Nor do I mind them fraternizing with cats, although I think it proves the truth of the phrase "hare-brained".  What I mind is this Roman-orgy atmosphere they give the place.  The way some of them look, I expect to see little togas and vine-wreaths lying under the marigolds and zucchini.

And there's the problem.  You see, my garden is in my front yard because it's the only place that gets enough sun to grow anything but moss.  In any major urban center - say 12,000 and up - I would have been run out of town on a rail for plowing up perfectly good sod to grow vegetables.

But here in Laskin, it's a tourist attraction. Every walker in town stops at my chicken-wire fence and comments freely about the condition of my soil.  My neighbors bring their out-of-town visitors over for the afternoon, which tells you something about the entertainment options of Laskin.  I stepped outside one day and found a dozen people, none of whom I knew from Adam's off-ox, standing around wondering why I put the beans there, why my peppers weren't blooming, and what in the world was THAT?  (Eggplant.)

No my North Forty is good clean family fun.  It's also a lot of hard work.  Note to Martha Stewart:  the real key to a perfect garden is to put it in the front yard, where every weed becomes public knowledge.  God knows that after years of this, my character has been thoroughly shredded, and what I should do is just quit, but that would start even more rumors...

I need an excuse, a reason, like an excavation.  I believe there's something under the potato patch.  We just haven't looked properly.  I need professional archaeologists.  After all there are dinosaurs on the property already, and it's not my fault if they've evolved to the point where they have feathers...

I disagree on birds but love the front yard garden. You've a friend who writes an excellent letter!

Thanks, Janice. I'll let Linda know! And it's good to be back.

We have rabbits living in the bushes next to the house. For about 10 years I fed the birds, but had to give it up about two years ago when I saw a rat in the back yard. Some female wild turkeys, who evidently lived near the Quaker Oats plant downtown, found out about the bird feeders & came here to eat several times.

Love. Great column. (I tried to post a heart above, but it didn't work right.)