The Moments We Remember


by Steve Liskow
Jim Howard, a former Hartford police officer whom I see more often than not at open mic gigs, is one of those rare people who can play harmonica and guitar simultaneously. Today, he turns 71 (Happy Birthday, Jim), which makes him almost exactly six months older than I am.

But that's not how I remember his birthday. 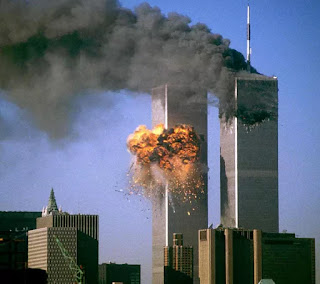 We all have a handful of days we remember, and they change from generation to generation. Some are good days: meeting your future spouse, for example, or the day you won some award.

There are other days we remember because they changed the way we look at the world. Forever.

One Friday afternoon in 1963, I sat in my Latin III class when the principal came on the PA to tell us that President Kennedy had been assassinated in Dallas. The next few minutes are hazy. I remember feeling like the floor had dropped out from under me, and the gorgeous German exchange student whom I never had the nerve to ask for a date turning to the boy next to her and asking him what "assassinated" meant. He answered with tears pouring down his face and most of us cried along with him. 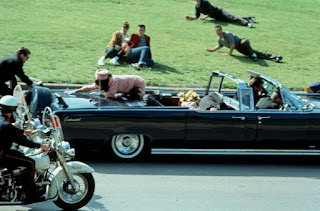 I was sixteen. That may be the moment when I began to comprehend what I now identify as "evil."
Years later, my wife and I met Laurent Jean, a fine actor and director with whom we worked on many theatrical productions. Laurent's mother went into labor on November 22, 1963 and he was born the next day. I remember his birthday easily, too.

Five years later, I was shaving for a date with, coincidentally, another young woman from Germany when my next-door dorm neighbor burst in to tell me Martin Luther King Jr. had been shot. I watched the play that night, but I don't think either my date or I could have told anyone about it the next day. By the time I walked her back to her dorm, we could see the orange glow dancing in the sky over Pontiac, Michigan as the town went up in flames five miles away. 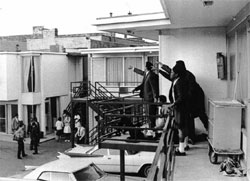 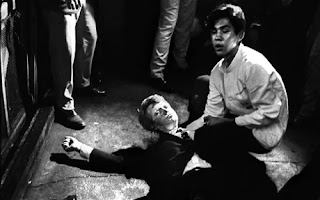 Barely two months later, Robert Kennedy was shot, too. The year I turned 21 featured both those killings and the riots at the Democratic National Convention in Chicago (Where former CT Governor and JFK Cabinet member Ribicoff infuriated Mayor Daly with his comments about police "Gestapo tactics" against demonstrators), not to mention the escalating Vietnam War.

By then, most of the shaping had been done and I was probably about 90% of the person I am now, for better or for worse. 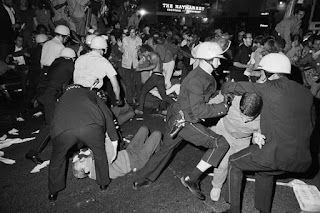 One of my former students was in pre-med classes at George Washington University hospital when the Secret Service rushed Ronald Reagan into surgery after John Hinckley wounded him. He wrote me later to tell of his shock and horror when men in suits rushed in waving weapons and badges. This was his first life shattering event.

In January, 1986, I was producing a play and sat in the lobby of a local theater trying to reach my set designer on the pay phone (remember them?) and watching a portable TV replay the Challenger explosion. My director, a former Vietnam pilot and then an aeronautics engineer, watched a dozen replays and finally called the local news station to suggest what might have gone wrong. The subsequent investigation confirmed his suspicions. We didn't rehearse that night. A few people may have wired up speakers or focused a few lights, but most of us sat in the half-assembled gallery and cried for the astronauts and their families. 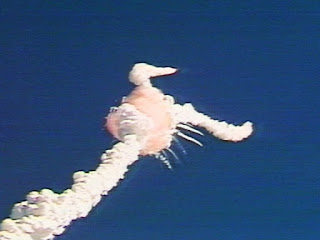 In September, 2001, I was teaching five classes--two for the first time--and still learning the names of 125 students. I cut through the media center toward the teachers' lounge and saw dozens of people jammed around the TV set near the AV department. They were still telling me what had happened when we watched the second plane slam into the World Trade Center.

To my students in 2001, the World Trade Center was what Kennedy's assassination was to me, and I remember feeling the curriculum shift slightly for the rest of the year.

Every generation has a horrific event that shapes it. Right now, we're dealing with several natural disasters: Harvey and Irma, the earthquake in Mexico City, tropical storm Katia, the fires in the northwest (Nope, no climate change, uh-uh). But I tend to give the man-made events more weight. We know that Nature is immense and implacable, but the assassinations and explosions remind us over and over (and we never learn, do we?) of our own hubris.

And that's what we all write about. No matter whether we write crime, romance, sci-fi, poetry, or anything else, our material is the shattering events in peoples' lives. The events that force them--and us--to surmount and survive.

The events that make us remember for too short a time that we are all human.
Posted by Steve Liskow at 00:01