What's in a name

"What's in a name? That which we call a rose by any other word would smell as sweet."

As an army brat I traveled and was always the new kid in class. I waited for it. First day of school, teacher calling roll. When the teacher got to the 'Ds' I cringed. When the teacher stopped at a name, I raised my hand and said, "Here."

Invariably, the teacher looked up and said, "You have two last names."

Funny how so many kids in grammar school thought I was serious. Some teachers as well.

Often the teacher would ask, "How do you pronounce the one that starts with a 'D'?"

O'Neil as a first name? I envied the guys named Mike and Jimmy and Eddie. Even my brother got to be Danny. De Noux is cool. Got an 'x' in it. But it's spelled one way.

When my first novel GRIM REAPER came out, they spelled my last name Denoux on the cover. My aunts and uncle chided me. "You can't even spell your own name."

What I'm trying to say is, for God's sake, spell the person's name correctly. Look it up if you don't know. Poe is not Edgar Allen. It's Edgar Allan. Hemingway has one m.

I know. This is coming from the guy who sets records for typos.

And not just names. Titles! 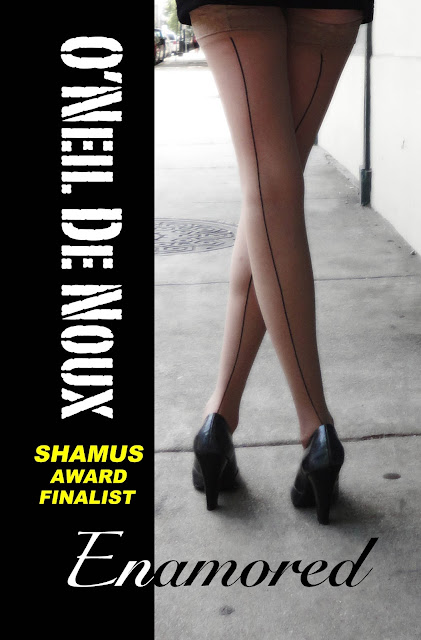 The internet can be a big problem with this. It never forgets and can never be corrected, even when it is corrected.

When my novel ENAMORED was nominated for the 2012 Shamus Award for BEST INDIE PRIVATE EYE NOVEL, the press release from the Private Eye Writers of America spelled my name correctly but misspelled the title as ENAMORTED. Someone thought it was a play on words, something to do with the French word MORT. Dead. The book's a mystery after all and I do have a French last name, right?

I called for a correction and it was made but the damage was done. Too late. Websites worldwide listed the nominations as soon as the press release came out. The book was ENAMORTED. I had readers and reviewers email me because they couldn't find the book on amazon, couldn't find it on any search engine except references to the nomination. You'd think a book nominated for a SHAMUS would sell. Talk about dead. Sales? What sales? The book sank like RMS TITANIC ... and there was no iceberg.

Such is life in the slow lane. It didn't take me long to joke about it, only my wife didn't laugh. Her Irish was up. She was livid. Still is. For a while, if I wanted a rise out of her, all I have to ask is, "Remember that book I wrote - ENAMORTED?"

Eventually, in my house, we stopped saying someone 'passed' or 'passed away' or 'is gone' or 'is in a better place' or 'is in the hands of the Lord' or 'is playing hopscotch with Saint Peter' or 'is burning in eternal hellfire' or 'crossed the rainbow bridge'. Wait, that's for animals, isn't it?

We say he's enamorted. Funny? A little. Sometimes the hurt is humorous.

So, everyone please check your spelling, especially when it comes to names and titles.