The Thrill is Gone

John Grisham novels draw me in; I enjoy them immensely. The Firm especially appealed to me because it struck close to home, following my stumbling upon massive fraud within one of the largest Wall Street firms. In imaginative moments, I picture a dark, violent response turned into a Hollywood thriller. I could have found myself in a dastardly plot, on the run for my life with a miniskirted damsel as vice presidents and accounting drones dropped dead around me. Excited movie audiences would gasp between mouthfuls of popcorn, women would cry, and children would whisper, “He’s so bwave.” 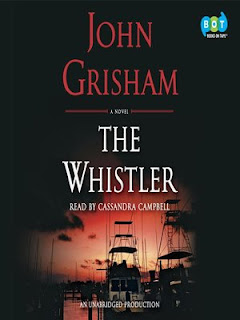 Twists of tension hallmark a Grisham tale. Some of his novels are sensitive and many explore societal issues, but I most enjoy his thrillers, those with brain versus vicious brawn.

During the holiday, I sat down with The Whistler, which promised to be a thriller. Meh, not so much.

Not every book from a great author turns out brilliantly. S.S. Van Dine said writers should stop after six novels, because no author has more than six good mystery books in him. There’s truth in that and Van Dine went on to prove his own point. He wrote twelve novels, but critics felt the latter half dozen were decidedly inferior.

Take for example our governor… please. This man committed the largest fraud in Medicare/Medicaid history… the most sizable medical corruption ever. The fines alone amounted to $1.7-billion, which left him plenty remaining to buy a Florida governorship. We, the real loonies who ignored his corruption, voted him into office not once but twice.


Thus when Grisham’s novel promises the largest judicial fraud in the history of America, the bar is set historically high. The New York Times reviewer failed to grasp this, but the multi-millions discussed in the story don’t come close to real-life frauds, not by Florida standards. Cons and bunco-artists have long prospered in the Sunshine State where mere six and seven figures are pocket change. If Grisham hadn’t promised biggest, hugest, worstest fraud, then we Floridians might have more easily suspended our disbelief.

I wanted more characterization, particularly of its heroine, Lacy Stoltz. While the author shortchanged many characters, Grisham delivered better with her short-lived partner, Hugo Hatch. Grisham colorfully describes Greg Myers/Mix, a disbarred lawyer, but abandons him halfway through the book.

Characterization of minor characters shouldn’t come at the expense of major inhabitants, especially the criminal mastermind behind everything, barely fleshed out by the end of the novel. We also learn little about the whistle-blower who started it all.

As for corrupt Judge Claudia McDover, I award a C. The main issue comes from her worrying if a man she sent to death row was truly guilty. Listen, John, we in Florida love to send even innocents to Old Sparky and Gassy Gus and believe me, officials don’t fret about it, they brag about it. Get with the program, man.

I lost count at the number of bitter divorcées in the novel, five or possibly six. Male writers think the way to a woman’s heart is to capitalize on putative anger towards men. Whether this James Pattersonian model is correct, I leave to readers.

Of all the characters, Lacy’s obnoxious, protective brother comes across as the most real. He’s the one guy we can picture in a love/hate way. If all characters were constituted this well, we wouldn’t be having this conversation.

Thrillers should feature thrills or at least suspense. At no time did I believe the heroine’s life was in danger. Her one brush with death came and went so suddenly, neither she nor we had time to fear for her.

Our disbarred lawyer Greg Myers disappears, presumed taken out by the bad guys. Then we’re told he might remain alive, sucking the air out of that danger. His girlfriend’s safety is more problematic, but that’s quickly resolved.

The tension ramps up a little regarding the whistle-blower. Thanks to the foresight of an alarm system and home security cameras, that risk proved minimal. It's no Pelican Brief.

The Firm set a high standard of suspense and tension. When people talk of an exciting Grisham novel, that’s the one that comes to mind. If The Whistler hadn’t been billed as a thriller and hadn’t overhyped superlatives of corruption and badness, it would fall comfortably in the drama arena. As it’s presently marketed, it’s a thriller absent of thrills.

The Grisham We Know and Love

But wait, all is not lost. It’s still an interesting read and Grisham gives us a little of the social commentary he’s noted for, particularly about Florida’s death penalty, which sounds much like my own writings.

Grisham briefly describes Florida’s Starke death row (there’s a self-descriptor!) where 400 men are warehoused in 6×9×9 un-air-conditioned cells, designed to make their remaining time on Earth as miserable as possible.


“Only California had more men on death row than Florida. Texas was a close third, but since it was more focused on keeping its numbers down, its population was around 330, give or take. California, which little interest in executing people, had 650. Florida longed to be another Texas, but its appellate courts kept getting in the way. Last year, 2010, only one man was lethally injected in Starke.”

“Total isolation leads to sensory deprivation and all sorts of mental problems. Corrections experts were just beginning to recognize this, and a movement to reform the practice of solitary confinement was struggling to gain momentum. Said movement had not made it to Florida.”

I’ve touched upon my AmerInd background and mentioned my parents’ disdain for the politically correct ‘Native American’ and ‘Indigenous American’ labels. Grisham is more comfortable writing about First Nation people than many writers. My family couldn’t have agreed more with his observation.


“The term ‘Native American’ is a politically correct creation of clueless white people who feel better using it, when in reality the Native Americans refer to themselves as Indians and snicker at those of us who don’t.”

Have you read The Whistler? What is your opinion?
Posted by Leigh Lundin at 00:00