The Book As Object


by Art Taylor
Michael Dirda's column in yesterday's Washington Post celebrated more than a dozen small presses whose books he recommended for summer reading. Many of these publishers specialize in genre fiction, and a couple are likely already favorites of my fellow contributors here and our readers: Poisoned Pen Press, which publishes the British Library Crime Classics series in the U.S., and Wildside Press, which has actually published stories and books by several SleuthSayers, including Barb Goffman's collection Don't Get Mad, Get Even, B.K. Stevens' collection Her Infinite Variety, several of Janice Law's books, including most recently Homeward Dove, and several volumes of the Chesapeake Crimes anthology series, the latest of which features my story "Parallel Play," which you can find here for free. (And while we're talking about "Parallel Play," I'm thrilled that both my story and my SleuthSayers buddy Paul D. Marks' terrific "Ghosts of Bunker Hill" have recently been named finalists for this year's Macavity Award—just find some way to vote for both of us!)

While Dirda's emphasis is on small publishers and summer reading, the column actually brought me back once more to another topic—books as objects—since several of the other publishers focus on high-quality, illustrated hardcovers, often in limited editions. In his column, Dirda himself contrasts one publisher from the next in these same terms. Writing about The Folio Society, Dirda asks, "Are these the most beautiful books being published today?" and then later in the column, he notes that Wildside's books "aren't fancy" before praising their enormous collection of titles in "fantasy, science fiction, adventure and horror" (and, again, I'd add mystery, of course).

There are a couple of ways to think about books as objects, of course. A reader may well feel some sentimental attachment to a specific book. I still have, for example, an old "junior deluxe edition" of The Adventures of Tom Sawyer, which isn't in terrific shape but which my mother read to/with me when I was a child. My tattered copy of the first volume of The Norton Anthology of American Literature never fails to transport me back into the classroom at my old boarding school, The Episcopal High School in Alexandria, Virginia. And I treasure a copy of Edward Gorey's Gashlycrumb Tinies not just because of the joy I take in reading it but also because it was a gift (Christmas? Valentine's?) from an ex-girlfriend—to whom I gave a copy of another Gorey title as a present on the same day!

The book as object can be a container for memories, I guess that's what I'm saying.

Interestingly, that ex-girlfriend was the one who first questioned why I enjoyed special editions of books: first editions, for example, or handsome special printings of some kind. Aren't there the same words in a tattered paperback as in a pricey hardcover? And aren't the words inside what matter?

It's hard to argue with her point—both from a writer's perspective and from a reader's, the words themselves are indeed the most important thing—but at the same time I can't help but admire and enjoy the beauty of a well-made book, holding it in my hands, reading it: an elegant binding, fine paper, original illustrations, etc. 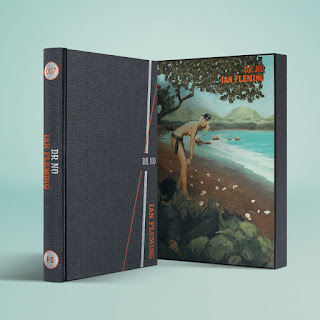 My wife Tara and I have become big fans of those Folio Society books ourselves. Just recently, she ordered their new edition of H.P. Lovecraft's Call of Cthulhu & Other Stories, which features some beautiful illustrations by Dan Hillier, and at the same time ordered me the next title in Folio's series of James Bond novels, Dr. No, illustrated by Fay Dalton. I already have the first two in the series (they're doing about one a year), and I anticipate continuing to collect the rest (I'm a sucker for these things, I know). And as a bonus for ordering two books, Folio sent us a surprise title: The War at the End of the World by Mario Vargas Llosa, one of my favorite writers. Much appreciated, and a beautiful edition as well. And I've also enjoyed a couple of Folio's editions of other crime classics: Dashiell Hammett's Maltese Falcon and Patricia Highsmith's first three Ripley novels in a nice boxed set.

Another of the publishers Dirda mentioned was Centipede Press, which also produces beautiful editions, limited editions in this case, numbered and signed by author or editor or illustrator or some combination of those. On Dirda's recommendation a few years back, I ordered Centipede's edition of Paul Cain's Complete Slayers, featuring his novel Fast One and all 13 "slayers" stories he wrote for Black Mask and other pulp mags—really his complete fiction. The edition features an illuminating biographical and critical essay by Max Allan Collins and Lynn F. Myers Jr., plus original cover art by Ron Lesser along with a gallery of covers of previous editions of Cain's books/collections. It's really a stunning volume start to finish, as is another book I picked up from them, Speak to Me of Death: The Collected Short Fiction of Cornell Woolrich, Volume One (which reminds me I need to order volume two soon as well).

And yes, Cain's and Woolrich's stories are great too—it's the words that matter most, I agree.

Centipede Press and the Folio Society aren't the only publishers putting out elegant editions of classic works. Beyond those mentioned by Dirda, another favorite publisher, Crippen & Landru, comes to mind as well; I could list a whole group of books they've published which I treasure, and congratulations to Jeffrey Marks, who recently took over the press's operations from founder Douglas Greene and promises to continue their fine work. But beyond a continued listing of publishers or of favorite special editions on my own shelves, a question: Does the specific edition/printing of a book matter to you as a reader—first editions, special editions, or those volumes with sentimental resonance—or does it make no difference at all?

(Postscript: It wasn't by design that the two covers here feature scantily clad women, though seeing them together reminds me of J. Kingston Pierce's wonderful blog Killer Covers (a companion site to The Rap Sheet), which celebrates classic pulp titles with often provocative artwork, a different group of special and collectible editions!)