The Purple Side of Blue


by O'Neil De Noux
Shell shock is what they called it during the wars of the 20th Century when combatants who survived shelling suffered serious psychological effects. Today it is called post-traumatic stress disorder (PTSD). We all know it effects police officers and other first responders as well. It comes in many shades. 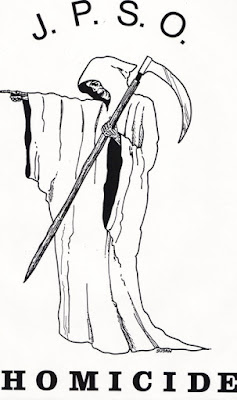 When I was a homicide detective We experienced what we call 'the purple side of blue' - a bruising of a police officer's psyche after repetitive exposure to extreme violence perpetrated on others. It effects police officers and their families. It is another brutal, lingering residue of the job.

I cannot even list all the horrendous things we witnessed - from infants beaten to death to children shot in drive-by shootings to stabbings to mass killings. It cannot be forgotten. Some try to numb the effects with alcohol or sex or whatever. It makes officers vengeful and their families stunned as the officer morphs from the smiling rookie who came out of the academy with visions of saving lives and catching criminals into a sulking individual with demons crawling inside their mind, reminding them of what they've witnessed. Again. And again.

Every cop I know who has been in law enforcement a while suffers the purple side of blue. Every one. Some more than others.

I've written about the subject, illustrating it in my police procedurals, rather than telling about it. Probably why my most realistic homicide novel, GRIM REAPER, has the word 'fuck' in it 344 times in a 208 page book. You see, on my first day as a homicide detective, my partner Marco Nuzzolillo (best detective I ever worked with) took me to witness 10 autopsies of murder victims. From that bloody day, I worked case after case where a human died at the hands of another human.

Not long ago, I was asked by a deer-hunter friend if I was a hunter.
"I used to be."
"Did you hunt deer?"
"No. I hunted humans."
Pause.
"I hunted humans who killed humans."

I am old now and have an excellent memory. I recall, with unfailing clarity my childhood days weilding wooden swords made by my father as we were the knights of the round table, days swimming in Lake Garda, nights chasing lightning bugs, getting into watermelon fights, looking at girls differently as I grew up, wondering why I noticed their lips and the flow of long hair and their smooth jawline and soft necks. I recall every broken heart, every scintillating thrill of love, recall the births of my children. I remember the bad times too, the failures in life we all experience, but we concentrate on the good times, don't we?

Sometimes, in the middle of remembering a day at the old zoo with a pretty girl, I can see her face and the beauty of that summer day and how I felt. Then I get a tap on my shoulder and turn to see it is nighttime and the bodies of two teen-aged girls lie next to the muddy Mississippi, their hands tied behind them, bullet holes in the back of their heads and I see their autopsies in flashes. I remember brushing a finger over their wrists, touching them, connecting with them, secretly telling each who I was. I was the man who was going to catch who did this.

My partners and I solved that murder case. Took 13 months, but we did. Closure? Not for me. I still see those young, dead faces under the harsh light in the autopsy room. Snapshots of carnage. Closure? Yeah. Right.

A better writer once wrote:
"Never send to know for whom the bells tolls; It tolls for thee." John Donne

Damn, this article is depressing. It is a wonder we can stand it all. Maybe that is what makes us human. We can stand anything.