New York, New York, it’s a wonderful town. The Bronx is up and the Battery’s down. Or is it the other way around? Amy (the wife) and I recently spent a week in New York City and I’m still not sure.  (Well, I am, but it plays better the other way.) And now the legally required disclaimer: I wrote about this trip for another blog a few weeks ago as my last slot for SleuthSayers was the family blog post that Amy did. So I didn’t have a chance to talk about our trip here. But it was writing-related and so great and so much fun I wanted to share a slightly revised version with SleuthSayers too.

The trip came up very unexpectedly when I got an e-mail from Janet Hutchings, editor of Ellery Queen Mystery Magazine, telling me that my story Ghosts of Bunker Hill had won the 2016 Ellery Queen Readers Poll and inviting us to come to the Ellery Queen cocktail party and awards ceremony, as well as to be their guests at the Edgar Awards. I think I was in disbelief for several days, so we made no plans to head to New York…until the wonderful reality actually sunk in and we headed off to The Big Apple from The Big Sour, I mean, Big Orange.

We booked out on Jet Blue because we heard about their great on-time record. We got lucky—they were late both coming and going. I guess someone has to be the exception to the rule.

The week was a whirlwind of adventures and some sightseeing, much of it filled up with literary events. We arrived Monday night and since the hotel is next door to Grand Central Terminal we decided to check it out and have dinner at the famous Oyster Bar. Talk about a cool place. Then we walked around the neighborhood near the hotel late into the night.

On Tuesday we went to the Ellery Queen offices for tea with Janet and Linda Landrigan of Alfred Hitchcock Mystery Magazine, and Jackie Sherbow, senior assistant editor for both EQMM and AHMM. Also there were Doug Allyn and his wife, Eve. Doug’s stories came in #2 and 3 in this year’s poll. But he’s been #1 11 times. I think it will be a long time before anyone can top that!

Everyone was very gracious. And it was good to talk with Janet again and Linda, who I’d met briefly before. And to meet Jackie for the first time in person, but who I’ve had a lot of correspondence with.
After the afternoon tea, Jackie very graciously offered to be our guide on the subway, something I really wanted to do. So we subwayed to Otto Penzler’s Mysterious Bookshop for a gathering of Edgar nominees, authors, publishers and more (I think we fell into the “more” category, though now that I think about it I guess I’m an author too). It was crowded, it was fun. It was great to see the famous bookstore. And to meet Otto Penzler himself. And to see some people I know, including Edgar nominee Jim Ziskin and many others. And Doug Allyn was kind enough to introduce me to several people.


After the party at the Mysterious Bookshop, Jackie was once again our subway guide, taking us to a real New York pizza place that she likes. So she, Doug and Eve, and Amy and I, braved the rain to get to the subway and then the pizza place. And in a scene that could have been out of a Woody Allen movie, we stepped just inside a local market to get out of the rain for a few minutes. I was waiting for the “nasty” New Yorkers to kick us out, but nobody was nasty and nobody kicked us out. Eve grabbed some plastic bags from the produce section to cover our heads and we ventured back out into the rain. We still got soaked by the time we made it to the pizza place. But the pizza was good and it was all worth it. After dinner, Jackie headed home. Doug and Eve, Amy and I took a cab back to the hotel. And this was the one loquacious cabby we had the whole time we were in New York and he was a riot. When we were just about at the hotel he nudged through a crosswalk and some guy in the walk started yelling at him, challenging him to a fight. Now we felt like we were in New York.

Wednesday we had a free day, so we played tourists (which we were). Lots of other tourists all around us. We did a tour of Grand Central Terminal, which was right next to the Grand Hyatt Hotel where we were staying and where the Edgars would be held the following evening. (On the other side of the hotel was the Chrysler Building, which we had a view of from our window. Now that’s pretty cool to be sandwiched between the Chrysler Building and Grand Central. During our tour we had another “New York” experience when some jerk called the tour guide a “dirty scumbag” and neither she nor any of us on the tour could figure out why or what she’d done. But despite that, most everyone was really friendly and nice and we had no problems with anyone.

After our tour of Grand Central we followed Clint Eastwood’s “Speed Zoo” example from the movie True Crime, where he jams his kid through the zoo at the speed of sound, and did “Speed New York.” We bought tickets for the hop on-hop off buses—buses where you can get on at one location and off at the next, hang out, then get back on and go to the next location. This way we saw a lot of the city in one day. Everything from the Empire State Building to the Flat Iron and various neighborhoods. We also hopped onto the Staten Island Ferry. From there we could see the Statue of Liberty. We ended the day in Rockefeller Center and then Times Square and dinner in a pretty good Italian restaurant off Times Square. Our meal was served family style—and being only 2 people we ended up with enough left over to feed everyone in Times Square.

The next day was the Ellery Queen cocktail party and awards, held at a specialized library not too far from the hotel. And it was a truly terrific experience. But the best part (besides picking up the award of course 😉) was being able to meet people in person that I know online but hadn’t met for one reason or another. Fellow SleuthSayer David Dean. Tom Savage. Dave Zeltserman, who published some of my stories early on in his HardLuck Stories magazine, and whose Small Crimes was just made into a movie on Netflix that released recently, so check it out. Besides hanging with Janet, Linda and Jackie, we also got to hang with Doug and Eve Allyn again, both of whom were great to hang with.

And, of course, it was more than a thrill to win the award!

And then it was off to the Edgars that evening. Very exciting. And all was going well, I even liked the food (and who likes the food at these things?), until the Master of Ceremonies, Jeffrey Deaver, stumbled and then fainted on the stage while doing some introductions. That was scary. Luckily he was okay, though whisked off to the hospital to make sure it was nothing serious. I believe tests showed that it wasn’t—hope so.

That’s the litany, now for the real deal: While we loved New York and all of the events, the best part of anything like this, Bouchercon, Left Coast Crime, etc., is the people. The community of mystery writers is a very warm, very supportive group. And, as I’ve mentioned, it was great to see old friends and also meet new people. We saw Jim Ziskin and Catriona McPherson, and had a nice chat with both of them. Met Otto Penzler. And it was good to meet Sam Reaves, Dave Zeltserman and too many others to name here. And great to spend time with Janet, Linda and Jackie.

New York has a bad rep in some ways and people who know me thought I’d hate it (as I haven’t been there in years…decades). I loved it. I loved the crowds. I loved the energy. I loved the writing community. I loved this whole unexpected trip. And I’m more than appreciative to Janet Hutchings for publishing Ghosts of Bunker Hill and taking a chance on my first story for Ellery Queen, Howling at the Moon (which, by the way, made it to #7 in the Ellery Queen Readers Poll). And to Linda Landrigan for publishing my story Twelve Angry Days in the current (May/June 2017) issue of Alfred Hitchcock Mystery Magazine. And to Jackie for everything she does to keep the wheels turning. And last but certainly not least to the people who voted for Ghosts of Bunker Hill and made it #1.

Something else that hit me while in NYC was the use of location.  Setting plays a major role in most of what I write. Author S.W. Lauden has said about my work, “I just read your next novel Vortex. I loved how the action bounced around Southern California, almost as if the region was one of the main characters.”

To me, location can sometimes be a driving force for the characters. Of course, they have inner motivations, but where they live, the zeitgeist, ambience and flavor of the city or desert or whatever locations the stories take place in adds to their motivations. And being in New York really made me notice the different energies and vibe of different cities. They really do have personalities of their own and those personalities influence and affect the characters. There are some stories that could only take place in New York and some that could only take place in LA, and not just by mentioning a street name or a location, it’s more than that. It’s the spirit of the place that comes through.  For me that location is often, though not always (see my story Deserted Cities of the Heart in Akashic’s St. Louis Noir and set there, of course) Los Angeles. And even though LA’s been done to death you might say…you haven’t seen my LA.

For more on my relationship with the City of Angels, please check out this link to my very first SleuthSayers post:
http://www.sleuthsayers.org/2015/02/adventures-in-la-la-land.html 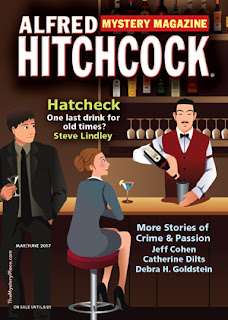 I'll be at the California Crime Writers Conference in Culver City, June 10th and 11th. I'm on a panel called "The Long and Short of It: Short Stories and Novellas vs. Novels" with William Kent Krueger, Kate Thornton and Travis Richardson, moderated by S.W. Lauden. Hope to see you there!
http://www.ccwconference.org/