Family Fortnight + Leading up to the International Day of Families on the 15th of May, we bring you the penultimate essay in a series about mystery writers’ take on families. Settle back and enjoy! 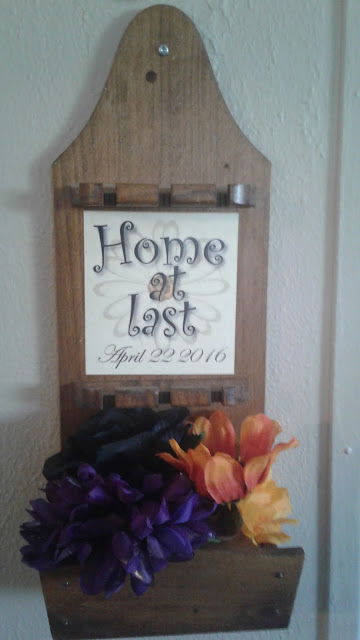 
It's been a while since I last posted, and it feels nice to visit again.

Hope some of you feel the same! LOL

As you may recall, my wife, Madeleine (aka: "Double-Clutch Click," "Mad Dog" or simply "Mad") and I bought a house last year. (In case you're wondering, Click happens to be her maiden name.)

And, unfortunately, I was having a hard time finding a place to write, because we simply had too much stuff.

Of course, it also had do with the fact that I tend to smoke cigars when I write, and I didn't want to smoke inside the house.

Which, landed me on the back patio – not a good solution during the Phoenix summer.


So, I've been pretty busy since I last visited with you, working to make myself a new backyard office, which is very nearly done. 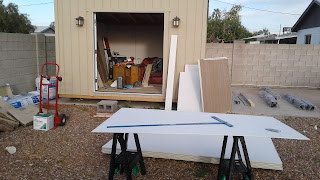 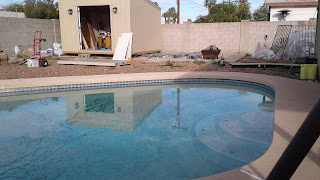 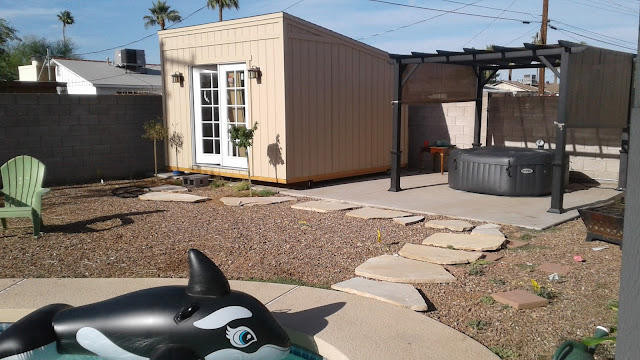 We still have a lot of work to do: plants to install (as well as a drip system), retaining walls, etc. But, I'm almost done with my office. Only have to sand the "mud" then paint. After that, I'll move in and start work in earnest ... though, in truth, I've already been using it. I've sent out a short story to a magazine I've long wanted to land a spot in, and I think I've got a fairly good chance of being picked up, having done my homework. (Of course, you never know! Do you?) And, I've sent out a revamp of an old novel, to see to if it can stick to somebody's wall. We'll see what happens. 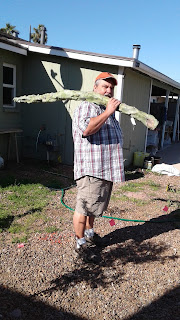 My office porch and steps, as well as the interior wood trim will come later. First, I want to crank out a large number of stories that are sitting in limbo on my computer. Meanwhile, I'm taking classes on desert landscaping at the Desert Botanical Garden which is just down the road from our house.

In April, we went to the Garden Sale there, and here I am toting home a Totem Pole Cactus. I've also brought in a half-ton of sand stone slabs, which you can see as the stepping stones in that picture above.

But, this post isn't really just about me letting you know what I've been up to. It's really about the way my suffering from "The Writing Bug" affects my marriage, and what my wife has to deal with because of it.

Writing, for me at least, isn't a thing I can turn on or off. Plots and ideas slosh around in the back of my mind, and sometimes parts of them slip out into my conscience thought when I least expect them to. Sometimes when I wish they'd have stayed floating around in whatever sludge inhabits my "little grey cells" a certain fictional sleuth might put it.

I don't know how many times I've been simply driving down the road, or sitting in a chair in the living room, only to hear my wife ask: "Oh, my God! Who are now? And who are you talking to with that look on your face? You look like you're getting ready to choke somebody to death."

See, this is part of my problem, one of the ways it manifests itself when I'm not expecting it. I might have a problem with one of my stories -- a scene, perhaps, in which I've gotten everything on paper, all the little boxes are checked with all the little scraps of information that I needed to get into that scene, but it just isn't right. Maybe it's too mechanical in its writing. Or, perhaps one of the characters just doesn't feel true. Sometimes, one or more of the characters fight me, wanting to do things, other than, or in a very different manner than, the parts I've written them into. And, about that time, it's usually necessary to start dinner. So, I set it all down, shut off my computer, and go in to cook.

But that scene, those characters, their actions, and their feelings: All those things are whirling around in my mind while I cook, as I eat, when I'm trying to talk to my wife and kids.

And here another little puzzle piece fits itself in. See, when I was in high school, I took acting classes at my school for two years, but I also took professional on-camera acting classes at a private academy. I'm not sure if it's fortunate, or unfortunate, but that academy stressed method acting, in which an actor tries to become the character who's persona s/he is trying to assume. And, this can have rather odd effects when I've got a scene whirling around in the back of my mind.

And, as I said earlier, sometimes it slips out. Often, this means that I've gone from just thinking about the scene, to thinking about ways to rewrite it, sometimes by looking at it through the eyes of one of my characters.

Which is why, I'll suddenly hear my wife asking me who I'm talking to, who I'm being, and what the hell I think I'm doing. And, I realize that, though I haven't uttered a word (though I sometimes evidently sort of growl) I've been silently yelling, or telling another character off, or even just letting the angry character silently vent through my face.

Madeleine and the kids have come to accept this (I think) though I'm sure they're not terribly comfortable with it. As for myself, I seldom realize it's happening until I'm brought up short by my wife. At which point I apologize, but can seldom explain my actions in any coherent way.

That's not all my family has to put up with, of course, but I thought I'd give you this example, just to provide a little taste of the weirdness of living with me. 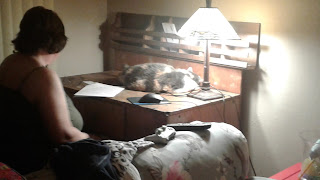 Now, to explain her view of things, I'd like to introduce my wife: a woman of great courage and moral fiber, whom I met in the army; mother of my three children; a woman who fought in the First Gulf War driving an unarmed fuel truck deep into enemy territory; the woman who puts up with my personal eccentricities … and (most important to me!) the one and only woman I love:

When people ask me what my husband does, I tell them he's a freelance writer. Almost immediately, their eyes go soft and look of wonder comes over them. To most people, a writer is the maker of worlds and the ultimate creator. They live in awe of writers and most people wish they had been given the gift of writing.

I seldom reveal the truth to them. I would not steal from them that look of childish wonder, and my lips remain sealed. I will, however, share it with you as what I am going to tell you is probably already known to you. I married Dr. Jekyll, but I LIVE with Mr. Hyde. There it is ... the truth. 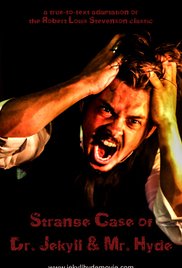 The man I married, Dr. Jekyll, is the perfect spouse. He is kind and patient. He is extremely intelligent and full of fun and laughter. He is always reading and gains knowledge by the day. He loves me and our children. He will spend hours with us in perfect harmony. Whatever happens he is rational and forgives easily.

However, when he is in the middle of a writing project, he is transformed into Mr. Hyde.

Mr. Hyde is quite different than the good doctor. Mr. Hyde has little patience and is quick to anger. He is restless and is partial to self-loathing. He is a man in agony. We try to treat Mr. Hyde like the doctor but we rarely succeed. Mr. Hyde will hide himself away for days taking breaks only for meals and the little sleep he allows himself. The work he does, his ART requires nothing short of parts of his soul which he is all too ready to render. To the outside world such a being can be terrifying to see but it is all part of the man we love.

This may all seem a little dramatic but it is the way I can best describe living with a writer, my own creator of worlds.


Well, that's it for this visit. You might find it interesting to note that this was written on Mother's Day, while the new hot tub was being filled and fired-up for the first time.

See you some time in the future!
Dixon 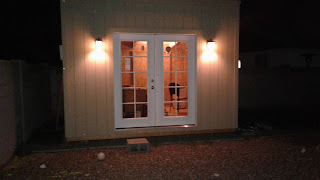