Keeping Resolutions (at least the reading one)

Back in January at Criminal Minds, another group blog I've been a part of, I talked about the importance of New Year's resolutions and listed my own for 2016. As the year progressed, I've been better about some of those resolutions than about others: we fell down, for example, on the plans for our four-year-old son to plan and cook meals once every couple of weeks, though he does still enjoy helping from time to time (reminder: don't try to make resolutions for others), and the cats and I still have a testy relationship sometimes (because, you know, cats). But one resolution I did stick with was reading War and Peace—all 365 chapters, one chapter a day.

I've long been a fan of Anna Karenina—one of my favorite novels, in fact, and I've read the whole thing three times—but War and Peace had always seemed daunting. The first time I tried to read it, several years ago, I made some brief headway then lost momentum as other things got in the way. Eventually, I just moved it back to its place on the shelf. But when I discovered—a fluke—the number of chapters in the book... well, suddenly a plan presented itself. Bird by bird, as they say—or in this case, chapter by chapter. And since the chapters are so short (most of them), it couldn't take any more than a few minutes a day. 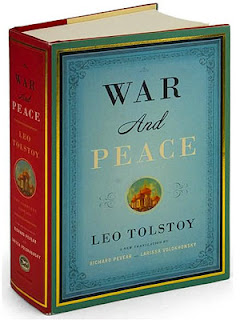 As it turns out, that's exactly what it took—not much more, even with the occasional longer chapter. I had both a hard copy of the book on my nightstand and then an e-book version, both on my Kindle and on my phone, which basically meant that I could fit in the reading whenever it was convenient: sneaking in a chapter first thing in the morning before the day got started or checking off that day's chapter late night before turning in; reading a chapter on my phone while I was waiting somewhere (including long, long stoplights); even reading an occasional chapter aloud to our four-year-old son when he was having trouble getting to sleep—and to his credit, he began to follow the characters and plot, asking at times for more stories about "that girl that everyone likes." (He did eventually learn that her name is Natasha, and he was as charmed by her as everyone else, it seems).

My point here may seem to be about time management—breaking down big projects into bite-sized pieces—but there was another lesson here. Many times when I'm reading a book, I push through it at a much stronger pace: some novel I'm reading for class, for example, or a book I need to review, deadline-driven in both instances. And even with the books I read for pleasure, I often find myself eager to finish them for one reason or another: enjoying the plot and rushing to find out what happens next; wanting to move on to other books calling to me (always a long TBR list); or just feeling like it's been hanging around the nightstand too long, and I simply need to get it done.

But my purposeful pacing with War and Peace forced me into a different way of reading. It's not just that I only had to complete one chapter a day; it's that I completed only one chapter a day—never deliberately moving ahead to the next, even if I suddenly had extra time or some greater interest in what lie ahead on the next page. (It seems, however, that I wasn't diligent enough in keeping track of my pace at times, since I've finished the book a week early—so likely I read a chapter in the morning and then another at night some days, forgetting to mark it off on my to-do list.)

In any case, reading at that  pace meant that I was immersed in War and Peace for longer than I've ever spent with a book. I lived with it—and in it—for nearly a full year.

I'm not certain that I can fully express how this changed my experience of it, though I did feel that I got to know the characters in a different way (so many of them in this case!) and that I inhabited the scope of the novel more fully by letting it expand in time, so to speak, in the time in which I dwelled inside of it. And the reading did become habit—to the point that I'm already feeling the absence of the book in my life, something missing now.

...which leads me to wanting to repeat the experiment with some other big book on my want-to-read list: Bleak House is tops there probably, and East of Eden too, one of my wife's favorites and one she has long wanted me to read. Or then, maybe, a big group of short stories read in deliberate progression: all of Chekhov perhaps or all the Father Brown mysteries or....

I'm just musing over possibilities now, of course—but also curious if others have every tried such a thing, to live with/inside a book for such a prolonged period of time, and which book, and what you thought of the experience. Looking forward to hearing your own stories in the comments section!

From one extreme to another, here's a much shorter bit of fiction as a free gift to readers of the blog: my story "Parallel Play" from the recent anthology Chesapeake Crimes: Storm Warning. It's not hardly a seasonal story (no tinsel, no gifts, no glad tidings, little gladness at all), but it might be just the thing for some cold, dark winter night ahead—since it's definitely one of the darker stories I've ever written, and one of the coldest too maybe. I've posted it on my own website here, and I hope you all might enjoy!

Email ThisBlogThis!Share to TwitterShare to FacebookShare to Pinterest
Labels: War and Peace