An over-hyped Business Insider headline caught my eye:
If you guessed this has something to do with political correctness, two points for you. That newspaper’s new policy I’ll explain below, but first some background.

Working as a software designer, I specialized in operating systems bits & bytes stuff. Most programmers worked on applications– invoicing, payroll, perhaps tracking the speed of an electron. Some records such as personnel files might require a designation of gender. In computer languages that could address the bit level, that assignment required only one ‘bit’, one binary digit.

See, a binary digit represents either of two mutually exclusive states decided by the developer: 1 or 0, on or off, true or false, yes or no, black or white, yin and yang, day or night, male or female. What could be simpler?

A long-ago story in the industry press brought to light a programmer in Asia who didn’t quite understand the concept of binary and assigned two binary digits, one for male and the other for female. Observers realized two additional possibilities could some day be programmed, hermaphrodite (all bits on) and morphodite (all bits off).

Ranching and farming communities use ‘morphodite’ or its older form ‘morphrodite’ to refer to livestock born without either sexual characteristic, the opposite of hermaphrodite, in which both male and female characteristics appear. One of the cruelest bullying insults is to call someone a ‘morph’, i.e, sexless.

Historically, a sense of sexuality is more deeply important to people than its seeming superficiality suggests. Most given names not merely denote masculinity and femininity, an actual meaning may further signify manly and womanly. Two such examples are Charles and Carla.

The importance of sexual awareness naturally provides a rich vocabulary of ridicule and rejection. We apply the term ‘limp-wristed’ only to a small number of males. We’re not complimentary when we call someone a swish or a dyke, and people have been known to use worse, far worse.

You no doubt heard a hysterical North Carolina put a statute on the books requiring people to use the loo associated with their birth gender. I’m hard pressed to think of a more useless law.

☞ When I was a toddler, my mother took us children into the ladies locker room of the local pool house. A woman fled the scene, aghast to have three- and four-year-olds within view. But other ladies didn’t flee in terror and outrage and back then, it was perfectly legal. Tally: One woman verklempt.

☞ In the 1960s, women attending concerts in Central Park often used men’s rooms when their own became overwhelmed. They needed them. No need to get verklempt.

☞ In the 1970s, feminists took over a few men’s rooms in Manhattan just because they could. To their disappointed, no one got all verklempt.

☞ In the 1980s, I consulted in Europe. Outside the WCs, the janitorial staff didn’t bother with those yellow plastic ‘Piso Mojado’ signs (that don’t mean Mojo peed here), the attendants– male and female– went about their business. Thus in an airport pissoir when a lady swabbed the urinal next to me, I summoned available savoir faire, outwardly blithe to the situation, one that would occur from time to time. There were places we’d both rather visit. No need to get verklempt.

So to North Carolina that wrote the peculiar legislation: My experience with the Carolina legal system has already made it my least favorite for multiple reasons, but what were you thinking? Who the hell cares?

Apparently a couple of cops (male and female) did: They dragged a woman from a ladies room because she didn’t look feminine enough. Put another way, the cops wanted to force the woman to use the men’s room. (According to Snopes, at least one supposed case was bogus.)

Note that the officers demanded ID, but one of the few civil liberties remaining after the US PATRIOT Acts, except for probable cause, is we don’t have to produce identity papers on demand.

How to Put the Rest in Restroom

I’m as ham-handed and foot-in-mouth as most guys. When it comes to transgender issues vis-à-vis public toilets, I don’t know if I’m insensitive or not when I say “I… don’t… care.” It’s your business, not mine. Each of us carries our own burden without adding to the woes of others. Come in peace, go in peace, what else matters? Unless you're thinking a ‘family values’ senator in a Minneapolis airport futilely cottaging young men.

On the other side of the argument, a guy standing in line at my local WaWa gas station loudly pontificated, “What if some queer goes into the bathroom with your daughter?” He completely missed the irony of his supposition. (And I'm sure he meant restroom instead of bathroom).

As mentioned in the opening, Business Insider wrote:


A major newspaper is doing something that could change the English language forever.

The story behind the overheated lede is that The San Francisco Examiner (limited to the American language) has adopted a policy that reporters must ask interviewees their ‘preferred pronoun’: he, she, or they. 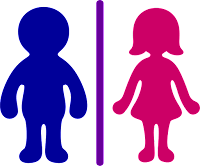 My ego is sometimes so large that it could be referred to as ‘they’, but sexually, no question. Surely a sensitive interviewer could figure out a non-offensive term on his/her/their own. Embodying this in official policy makes it difficult to deny accusations of overwrought political correctness.

As children, we were taught to say “Yes, ma’am” and “No, sir.” The US military created their own rule: Personnel are addressed as “sir” unless an officer requests the use of “ma’am”.

Since childhood, my brother Glen cultivated waggish weirdness into a modest industry. The smartass may have come up with a solution in grade school. Back then he addressed his teachers: “Yes ma’am, sir.” God love ’im.