An Imaginative Time of the Year

It's that time of year again -- my 13-year-old son's favorite.  Not just because it's summer, and school let out last week.  There's more. 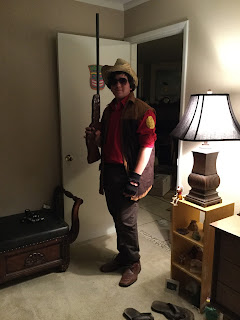 And the Q-man is stoked!

That's him on the right, in this year's almost-completed costume.  He's going as "The Sniper" from the video game  Team Fortress 2.  You can see a pic of the character he's "cosplaying" below. 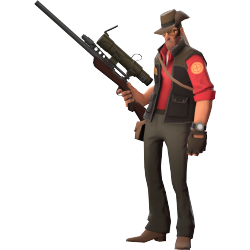 Quen's still missing a scope and laser range-finder from his rifle, and a few other details, but we're working to fill the gaps by Thursday morning.

I'm writing this Wednesday night, since all my regular free time will be consumed by Comicon activities with Quentin over the next few days.

This year, those activities include a screening of the film Jaws, with live commentary and a talk by the screenwriter, Carl Gottlieb -- and, later, a discussion and demonstration of Bartitsu (You Holmes fans know what I'm talking about!).

Writing workshops are also scheduled, and I'll be attending a few about Science Fiction and Steampunk, to get a few tips I might use in "outside the box" mysteries, while the Q-man goes to see Billie Piper from the Dr. Who TV series. And, once again, we'll be trying to get him into the Cosplay Contest at the comicon.

Those who attended Left Coast Crime, earlier this year, may find it humorous to learn that the Phoenix Convention Center, where I'll be spending the weekend, is just across the street from the hotel LCC was held in.

We're still not quite finished moving in, as you can see in this picture taken in our kitchen (above right).