The Guns of Navarone

My local library, the Roland Park branch of the Enoch Pratt system (Baltimore's excellent public resource), runs classic movies from their DVD collection the last Saturday of every month. THE COURT JESTER, THE SEARCHERS, SOME LIKE IT HOT. This past month it was THE GUNS OF NAVARONE.

Alistair MacLean had a heck of a run, from the mid-1950's well into the 1980's. He regularly hit the bestseller lists, and a dozen of his novels were made into successful pictures, the best-remembered being GUNS OF NAVARONE, ICE STATION ZEBRA, and WHERE EAGLES DARE. MacLean himself said he had a visual style, which adapted readily to movies. 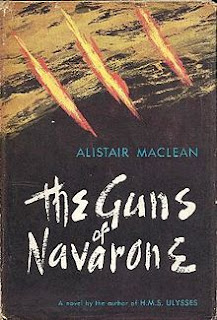 THE GUNS OF NAVARONE came out in 1961 and did enormous box office. It broke big, being one of the first road-show spectaculars - with a runtime of two hours and forty minutes - and pulled in huge numbers. It was the highest grossing picture of the year, and it racked up seven Oscar nominations, including Best Picture, Best Director, and Best Screenplay, although it didn't make the finish line. It was rousing stuff, old-fashioned derring-do, but with a subtext that was basically antiwar.  The mission could have been a suicidal folly, and men's lives spent for nothing.

It stands up pretty well, fifty-odd years later. There's very little wasted motion. The set-up is brisk, the internal frictions get established early, the obstacles are sketched out, and we're off to the races. The leaky Greek fishing boat, the heavy seas, the impossible-to-climb cliff face, the Germans not asleep at the wheel but on high alert, the clock working against the team, the odds of blowing the guns going from bad to worse, and of course the traitor amongst them. Generic conventions, yes, but it's pretty consistently tense. Not that the actors don't help. Peck and Quinn are terrific, Niven is even better. (It's interesting that Niven's character is given the speech about the folly of war, since Niven himself, in real life, is probably the closest thing to an actual war hero.) They make their characters convincing. 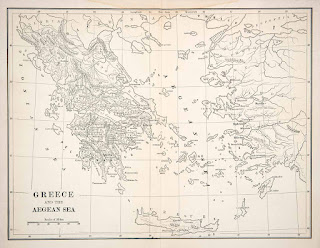 Methinks the storyline owes more than a little to Patrick Leigh Fermor's wartime adventures on Crete, but MacLean would probably be the first to admit it. Commando operations usually have an element of desperation, and a high risk of failure. Not to mention a bullet in the head if you get caught. If anything, GUNS OF NAVARONE doesn't soft-pedal the cost, or pretend that heroics can paper over the consequences of taking up killing as a trade. Stanley Baker's veteran knife guy has lost his stomach for it, even as James Darren's baby-faced psychopath can't get enough.

Some the special effects look kind of cheesy, at this remove, although the picture's only win at the Oscars was for FX, but now's the time to bring up the technical specs. NAVARONE was shot using the Technicolor process, and the original limited-release prints had extraordinary clarity and color saturation, but when the picture went into general release, new prints were made. Accoring to IMDb, the film negative was damaged in the lab, and the resulting prints are second-rate. In other words, if you've seen NAVARONE on late-night television or VHS, sometime in the last fifty years, you haven't really seen the picture, not the way it's supposed to be seen. Get the restored version if you can. It's worth the effort to find it.

for a while, but it's not really a completely straight-ahead action picture, it's more ambiguous than that. They've got the nuts and bolts down, which can be the most fascinating part, the method, the mechanics of the job itself, but although the characters often reference getting the job done, there are just as many hesitations, as if there were a choice. Sometimes you don't get to choose. NAVARONE is about forced choices. Necessity isn't the lesser of two evils. It's when nothing else is left.

David, as you remember, I’m a major fan of Alistair MacLean and I think I’ve read all of his books. Figuring out the character who wasn’t who he appeared to be was always a challange. Only a very few I don’t care for, mostly those set in California, mainly because his other novels set such a high bar.

Navarone was the first novel of his I read when I was in grade school. I’ve seen some of the MacLean’s movies, even stumbled into one (Fear is the Key) in a mid-afternoon matinee. But… I don’t think I’ve ever seen Navarone. I have to correct that. And of course I enjoyed the article.

I was happy to be reminded of one of my favorite actors, David Niven!

Great post, David. I have that movie, and watched it again not long ago. I also own most of MacLean's books. Thanks for bringing back good memories.

Was there a book called something like Return to Navarone? Anyway I bought my first McLean in with a batch of used paperbacks and stuffed it in my travel bag. I don't remember the title but I started reading it waiting at the airport. I got so deep in that book I almost missed my plane.