Of City Hall, and Editorial, Needs

As many of you know, my wife and I intend to construct (or install) a backyard office, at our new house, where I can write.

R.T. Lawton asked, when he learned of our plans: "How tough will it be getting a permit from the city?  I assume you're a good enough draftsman to draw up a simple plan to show them."

Frankly, I wasn't sure how hard a permit would be to obtain, but I knew there were similar outbuildings in backyards nearby, so I wasn't too concerned.  And, while I could probably dig out my old T-square and triangle, I'm saved from such a task by my wife, who works as a CADD drafter. 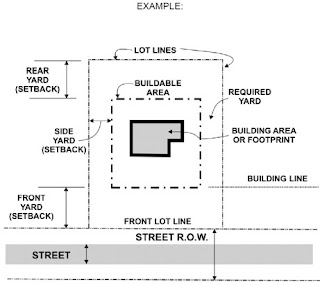 R.T.'s question was a good one, however, because I wasn't sure what the city regulations actually ARE. And, since I also intend to build some shade structures (Such items can actually save several hundred dollars each year, in electricity bills, here in the desert.) I decided to trek down to city hall to investigate setbacks, easements and regs.

Thankfully, the results were relatively unsurprising though perhaps a bit humorous.

I can add a carport, for instance, as long as I install it perpendicular to my driveway.  Yep, you read that right: the carport has to run perpendicular to the existing driveway.  Which means, to add a carport, I have to add a 90-degree dogleg to my current drive -- and it's this dogleg that can then run in under the new carport.  (Looks like the idea behind this one, is that it cuts down on the distance a carport might penetrate into the 20-foot front setback.)

We'll have to trim the size of the grape arbor we wanted to shade the western wall of our house with, too, because regulations call for no more than a two foot punch-out in that area.  No problem.

Looks like smooth sailing.  I only need a 2-foot setback from side or rear property lines.  The planning and construction department will happily accept my wife's CADD plans and require no others.  If I'll request and pay for it, they'd be happy to send out inspectors after we run the electrical, and after the construction is complete, so the office can actually be added to square footage -- which might come in handy if we ever sell.  On the other hand, I'm not sure I want to deal with the added time delay or headache.

As my old friend, Harrold (who worked for many years in the city planning department), used to advise: "Unless you're worried about sales value, it's usually better to ask forgiveness than permission when dealing with a city."

But, all this had me thinking about how to deal with editors concerning certain types of stories.  I've long had a story sitting in my files, for instance, which seemed perfect for a certain youth magazine -- except that the setting just wasn't a good fit for that particular publication.  The manuscript is historical fiction, which they publish, but they tend to concentrate on U.S. historical settings in their fiction.

The protagonist of this story is a teenage soldier in the British army during the Napoleonic era, which I'm pretty sure they'd balk at.

Working to think outside the box, on these small construction projects around our new house, seems somehow to have helped me possibly solve my story problem as well.

I suddenly recalled that the magazine in question publishes science fiction stories, as well as historical and other types of fiction.  Consequently, I've recast my Napoleonic era story with a story set on a distant planet that humans colonized some time before.  Due to vast interstellar distances, however, colonists on new planets can bring only limited supplies with them and are largely left to their own devices after initial landing.

The colonists on this planet have managed to reach a technological level roughly akin to that enjoyed by humans, here on Earth, during the Napoleonic era.  A dictator has taken over part of the planet, and his army is trying to take over the rest.  Our hero is part of the opposing forces.

Now, our protagonist can do his duty, safely ensconced in the military hardware required to make my
storyline work, but I don't have to worry that the magazine will balk at the non-U.S.-focused historical setting.

True, they may not like this sci-fi version of my story.  (Time will tell.)  But, I can't help thinking this will be an interesting experiment.  This is the first time I've committed to making such a large change in the story setting -- basically changing the genre (from historical to sci-fi in this case) while maintaining nearly the entire plot line and all characters -- all while still considering a sale to the same magazine.

I wonder if any of you have ever done the same sort of thing, and what the results were.  Please let us know in the comments.

Meanwhile, I'm still working to integrate the new setting into the story, in as organic a manner as possible.  I'll let you know how things turn out.