Somewhat to my surprise, I’ve discovered that in old age, a woman’s fancy turns to thoughts of clergymen – of the mystery fictional variety, that is. Certainly jolly, confident, busybody Father Brown has enlivened many dark winter months, and his younger, Anglican counterpart, Cannon Sidney Chambers brightened up an erratic spring.

Chambers is the vicar of Grantchester, a parish near Cambridge. Like Father Brown, he first saw the light in shorter works, novella length stories by James Runcie, who was inspired by his clergyman father, the Archbishop of Canterbury. There’s a dad for a mystery writer!

Runcie has planned a series of volumes that develop Chambers’ character and recount his romantic adventures and professional trials as well as his amateur sleuthing. That is the first difference with Father Brown. The good priest of Kembleford is a completed character, if I can put it that way. His personality is set and so is his neat little circle of friends, helpers, and opponents. In every way, socially, professionally, and theologically, Father Brown is confident he knows the score, and he never hesitates to plunge into the case of the moment. 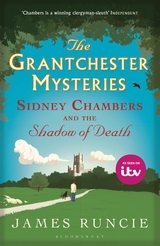 Sidney Chambers, in contrast, is very much a 21st century detective, even though the stories are set the early 1950’s. He is even more uncertain, diffident, and troubled in print than he is in the television series, where James Norton’s unusually robust, athletic, and handsome physique lends a dynamic touch. At the same time, Norton’s restraint – very much in keeping with the original stories  – helps to downplay the soap opera additions TV favors.

So how is Grantchester as a mystery series? Pretty good on the screen and in print, too, where five volumes are out, beginning with Sidney Chambers and The Shadow of Death. The TV series goes, quite naturally, for extra drama and emotion; the novellas add more than a soupçon of clerical doubts and guilts. Sidney is conscientious and scrupulous to a fault – except when the requirements of a murder case require a little stretching of the rules.
The print Sidney worries, on the one hand, about neglecting his parish duties and failing to engage his parishioners, and on the other, about the morality of interfering in the lives of those touched by crime. Needless to say, the TV Sidney does not ruminate very long on either. Where both Sidneys converge is in their struggles with the weekly sermon. Print Sidney fusses about this task and muses on its content seriously. TV Sidney concludes many episodes with the Sunday sermon, a neat reflection of the issues raised by the case of the week.

The first Father Brown story appeared in 1914; the first volume of the Grantchester stories in 2012, 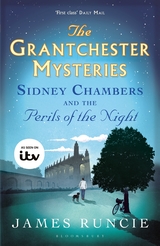 and what interests me is the difference roughly one hundred years has made in the approach to detection. Father Brown was a rival of Sherlock Holmes, and if he is too good a clergyman to sulk like Sherlock when crime is thin on the ground or to complain at the poor quality of the murder on offer, he certainly thrills to the chase and pursues the puzzle with the same eager joie de vie that he gobbles Mrs. McCarthy’s famed strawberry scones.

One hundred years later, Cannon Chambers has been infected by modern angst. Two wars  have erased the optimism of the Edwardians, and his time fighting with the Scots Guards has left him with bad memories and more taste for whisky than is really good for him. He meddles in crime in spite of himself, spurred on, it is true, by his great friend and backgammon partner, Detective Inspector Geordie Keating (Robson Green), who appreciates both his logical acumen and his psychological insight.

The good padre is conflicted on the romantic front, too. Though Mrs. Maguire ( Tessa Peake-Jones) runs his household (1950’s bachelors require self sacrificing and efficient housekeepers – see also The Doctor Blake Mysteries) everyone agrees that he needs a wife. Various characters either seek to introduce him to Ms. Right or put themselves forward for the role. Alas, pleasure produces guilt, an old crush interferes with present possibilities, and complications ensue.

Fortunately, Runcie has already completed five volumes with one more to come. Perhaps the good Cannon Chambers can find the right woman and retire to domestic bliss. Perhaps. But in the meantime, he has lots of cases to solve in charming – but clearly dangerous – Grantchester.
Posted by Janice Law at 00:00