Shoot the Sheriff on the First Page

Like most rules, some work and some don't. Starting with the weather didn't hurt The Red Badge of Courage ("The cold passed reluctantly from the earth, and the retiring fogs revealed an army stretched out on the hills, resting") or Raymond Chandler's "Red Wind" ("There was a desert wind blowing that night"). I do, however, like the idea of beginning with action ("They threw me off the hay truck about noon"--The Postman Always Rings Twice) or implied action ("The grandmother didn't want to go to Florida"--Flannery O'Connor's "A Good Man Is Hard to Find"). Most of all, I like openings that are intriguing enough to make the reader want to keep reading.

Bickham believed that you should start as far along in the story as possible. That way you can begin with something happening, and let the preliminary information seep in later, as (and if) needed. Author L. Sprague Decamp is credited with the quote "Shoot the sheriff on the first page." In fact, if the story's short, shooting him in the first paragraph might be even better. Or in the first line.

As for first lines, here are a few from my own short stories. Alas, I doubt these opening sentences will ever show up as case studies in the writing classes of the future, but they do suit my purposes for this column, because I can remember exactly what I was trying to convey when I came up with them:

Jason Plumm lay on the beach for five hours before he was found.
--"The Blue Wolf," AHMM
Here, I wanted to introduce all kinds of questions. Why was he there? What had happened to him? Where was he, that was so isolated he wasn't discovered sooner? What will happen to him after his rescue, if indeed the purpose of those who found him was to rescue him?

Ed Parrott was cleaning his gun by the campfire, a hundred yards south of the herd, when the stranger stepped from the shadows.
--"The Pony Creek Gang," Reader's Break
One helpful hint about openings is to try to inject "change" of some kind into a character's life, whether it's death, divorce, marriage, relocation, a different job, the arrival of a new face in town, etc. We as human beings are wary of changes: If the protagonist feels threatened (and if Parrott doesn't, he ought to be), the reader will also feel that tension.

Susan Weeks had never seen a monster before.
--"The Wading Pool," Spinetingler Magazine
I've never seen one either, but I can imagine perfectly the one Susan saw in that story. Here I just wanted something scary, right away, to happen to my protagonist.

At 8:40 on a clear night in July, Jesse Pratt escaped from Building A at Crow Mountain State Penetentiary, stole a pickup from the staff parking lot, and promptly drove it into a lake fifty yards away.
--"Weekend Getaway," Pages of Stories
Another rule of story beginnings is to try to quickly identify as many as possible of "the five W's": what's happening, who's it happening to, why's it happening, when is it, and where is it. In this one, I think I managed to cover all of them in that opening sentence.

"What I can't figure out," Nate said, as he lay in the dirt behind a clump of cactus near Rosie Hapwell's house, "is why you married that idiot in the first place."
--"Saving Mrs. Hapwell,"  Dogwood Tales Magazine
More questions. Who are these people, and why are they hunkered down in the desert? Are they hiding? Who from? Rosie's husband, maybe? If so, is Nate a relative? A good Samaritan? Her lover? Hopefully, the reader will want to find out.

Sara Wilson was almost asleep when she heard her roommate scream.
--"Poetic Justice," Woman's World
One last "tip" that I try to keep in mind: whenever possible, start with action. Things are happening, and the plot is already moving forward. The obvious question here is What caused her roommate to scream?

Dave Cotten sat on his back porch with a .38 revolver in his lap, staring at nothing in particular.
--"Blackjack Road," The Strand Magazine

Rudy Tullos was in love with his neighbor.
--"The Garden Club," Eureka Literary Magazine 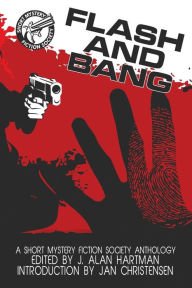 The two brothers lived together in the city at the end of the valley at the foot of the great blue mountains.
--"Custom Design," Lines in the Sand

Lou Rosewood stepped into the laboratory, closed the door behind him, and locked it.
--"A Place in History," T-Zero

Rose Cartwright was sipping coffee and knitting a blue sweater for her grandson when she heard the tinkle of the bell on the front door of the shop.
--"Rosie's Choice," SMFS Flash and Bang anthology

Jimmy should be back by now, Karen thought.
--"Night Watchers," Short Stuff

Hank Stegall saw her as soon as she stepped out of the building.
--"Ladies of the North," Phoebe

Tom stood alone in the hallway, staring at the number on the door in front of him.
--"Vital Signs," Red Herring Mystery Magazine

Catherine Munsen was less than thrilled about her job.
--"A Thousand Words," Pleiades

"Get in the truck!" Morton said, as he pushed through the door of the quick-stop and marched toward his pickup.
--"Lost and Found," Writers on the River

"I know you have my grandpa's gun," Eddie said.
--"The Early Death of Pinto Bishop," Writer's Block Magazine Around nine a.m. Billy Roland saw the water tower and the first cluster of buildings in the distance, steered his rented Ford to the shoulder of the road, and stopped.
--"Saving Grace," The Saturday Evening Post

For once, the Swede was speechless.
--"Greased Lightnin'," The Atlantean Press Review

Sheriff Lucy Valentine trudged up the muddy slope to find the first rays of the sun peeking over the horizon and an ancient purple gas-guzzler parked beside her patrol car.
--"Traveling Light," Sherlock Holmes Mystery Magazine

The scariest day of my life--and the most wonderful--happened when I was ten years old.
--"The Winslow Tunnel," Amazon Shorts

The old man was popping the last of the breakfast biscuits into his mouth when the door crashed open.
--"Newton's Law," Western Digest

Enough of that. Here's the good stuff--a dozen of my favorite opening sentences from both novels and shorts:

I turned the Chrysler onto the Florida Turnpike with Rollo Kramer's headless body in the trunk, and all the time I'm thinking I should have put some plastic down.
--Gun Monkeys, Victor Gischler

Fedship ASN/29 fell out of the sky and crashed.
--"Beachworld," Stephen King The magician's underwear has just been found in a cardboard suitcase floating in a stagnant pond on the outskirts of Miami.
--Another Roadside Attraction, Tom Robbins

I was fifteen when I first met Sherlock Holmes.
--The Beekeeper's Apprentice, Laurie R. King

Your father picks you up from prison in a stolen Dodge Neon, with an 8-ball of coke in the glove compartment and a hooker named Mandy in the back seat.
--"Until Gwen," Dennis Lehane

It was a bright, cold day in April, and the clocks were striking thirteen.
--1984, George Orwell

We were about to give up and call it a night when somebody dropped the girl off the bridge.
--Darker Than Amber, John D. MacDonald

How could a reader NOT keep going, after those?

Okay, what do you think, about all this? Do you find opening lines easy to write? Difficult? Are there specific things you try to do in an opening, like start with action or dialogue or a catchy situation? Do you try to introduce your main character, call him Ishmael, have her dream of Manderley, make his last camel collapse at noon, and get the plot rolling? What are some of your favorite opening sentences, from your own work or that of others?

In an interview with The Atlantic, Stephen King said first sentences are "a tricky thing." But he added that he was sure about one thing: "An opening line should invite the reader to begin the story. It should say: Listen. Come in here. You want to know about this."

King's good at doing that. Here's an example:

"The Man in Black fled across the desert, and the Gunslinger followed."

So did millions of readers.
Posted by John Floyd at 00:01