The Girl with the Golden Gun

I’m seeing another woman. She’s stunning, vivacious, rich and generous, and… she can dance. 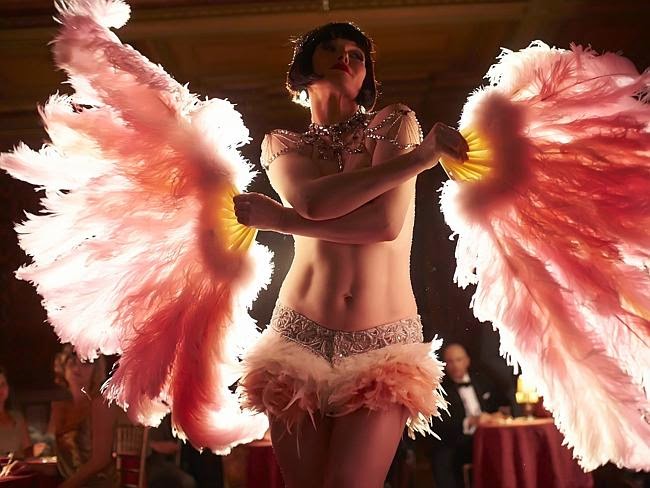 I told my girlfriend. Surprisingly, she doesn’t mind, which is saying a lot given her antipathy towards the Antipodes. Not our Stephen Ross’ New Zealand, mind you, that other country down under that does horrible things vis-à-vis soccer, rugby, and the purported game of (yawn) cricket, but that’s another story.

Anyway, about my new Australian darling…

But wait. First I’ll tell you why I longed to murder Lawrence Welk. I’ll tie this together, trust me.

Ever since I was a little kid, I despised that dastardly big band leader and his insipid Champagne Bubble Music™. His primary talent was outliving the really good musicians of the swing era, Count Basie, the Dorsey brothers, Duke Ellington, Benny Goodman, Lionel Hampton, Glenn Miller, King Oliver… pretty much everyone other than Louis Armstrong and Cab Calloway. Welk’s idea of pop was pap and pablum for the masses. His flaccid phonographic flummery almost ruined the music of the 1920s and 30s for me, one of the most creative eras in the 20th century, and we're not talking Stravinsky, Schoenberg, or Shostakovich. Imagine a modern Clyde McCoy on trumpet, Tommy Dorsey muting a trombone, Viola Smith thumping tom-toms†…

Listen to this as you read on:


This piece was not written nearly a century ago during the 1920s flapper era… it was written practically yesterday by Greg J Walker for the Australian television production of Miss Fisher’s Murder Mysteries. I wouldn’t normally write about television mysteries when I haven’t read the original books, but I confess I’m doing exactly that. That’s how smitten I am and it’s all Dixon Hill’s fault.

MFMM is, if you haven’t guessed already, a period piece and to my eye… and ear… dazzlingly done. It features wealthy flapper Miss Fisher, christened with the appropriate given name of Phryne. (You may recall the suitably scandalous Phryne (pronounced like Friday with an ’n’ instead of ‘d’) from classical studies.)

The young constable is earnest although inexperienced, but the inspector proves highly intelligent and smart enough to give Phryne her head: Her charm, wit, money, and standing in society allow her to access social circles he can’t. As Phryne gives an entirely new meaning to ‘man eater,’ he’s sufficiently wise to let her do the romantic pursuing.

If you’re guessing characterization is key, you’re dead on. Phryne is engaging and entrancing. She carries a gold-plated revolver and is slightly reminiscent of Emma Peel. Inspector Robinson manages to be both firm and lenient with her and sensibly underplays his rôle. Phryne’s imposing Aunt Prudence– every family needs a matriarch like her– is an old dear who represents old school and old money. And then there’s Phryne’s companion/assistant, little Dot– she steals scenes and everyone’s heart.

Before I stray too far, I must mention that Dixon Hill wrote the original article that intrigued me a year and a half ago. Curiously, two of my female friends expressed no interest in the series but one of me mates (oops, I've been overdosing) has started watching Miss Fisher from the beginning. Miss Marple she’s not. One review said Phryne ‘sashays’ through the stories, something a guy notices. Clearly we males find Miss Fisher fetching.

The historical detail is impressive. I admire many cars built in the 20s and 30s and Miss Fisher drives a beautiful Hispano-Suiza. Other viewers will applaud the costume of the era and Phryne wears at least a half dozen each episode. Indeed, one of the mysteries takes place in a house of fashion.

Sometimes writers imprint our present-day morals and values on the past, often imbuing a protagonist with a superior outlook. Not much of that shows through here– by nature Phryne is open-minded and the flapper era was daring, progressive, and sexually expressive. Thus Phryne’s physician friend Mac who dresses in men’s clothes comes off as genuine rather than contrived, not so much butch but a don’t-ask-don’t-tell person you’d like to know. 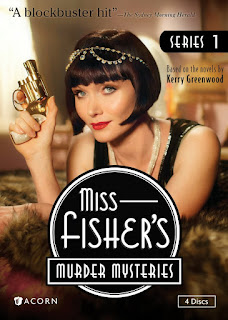 The plots? They take second place to the characters and costuming, but even when you guess the culprit, you enjoy how Fisher and Robinson get there.

And the music? Most of it’s straight out of the 1920s and early 30s and thoughtfully offered in three albums (thus far). Wonderful stuff. I’ll leave you with Duke Ellington’s dirge, East St. Louis Toodle-oo.

† Legendary drummer Viola Smith is still among the living at age 103½!