On this Seventh Day of Christmas (seven swans a-swimming...), I'd like to discuss a Victorian tradition:  Ghost Stories for the holidays.


From ghoulies and ghosties
And long-leggedy beasties
And things that go bump in the night,
Good Lord, deliver us!
- Traditional Scots prayer

Or, it says in Andy Williams’ classic Christmas song “It’s the Most Wonderful Time of the Year,” "There'll be scary ghost stories and tales of the glories of Christmases long, long ago.”

In Victorian England, Christmas Eve (and pretty much the whole Twelve Days of Christmas) was the traditional time to tell ghost stories.  People would rake up the fire, sit there with their mulled wine and roasting chestnuts, and scare the bejeezus out of each other.  M. R. James, the provost of Kings College, Cambridge, had a tradition of inviting students and friends to his rooms on Christmas Eve where he'd read them a ghost story he'd written. Charles Dickens published ghost stories every year at Christmas in his periodical, All the Year Round, as did other contributors like Wilkie Collins.  And, of course, Dickens wrote A Christmas Carol, in which four ghosts are prominent characters (you have to include Jacob Marley!), and the Ghost of Christmas Future was supposed to give you nightmares.

But if you really want nightmares, read Dickens' The Chimes.  Toby Veck, a poor ticket-porter, and his daughter, Meg - about to be married to Richard, a young laborer - are confronted by Alderman Wick.


‘You are going to be married, you say,’ pursued the Alderman.  ‘Very unbecoming and indelicate in one of your sex!  But never mind that.  After you are married, you’ll quarrel with your husband and come to be a distressed wife.  You may think not; but you will, because I tell you so.  Now, I give you fair warning, that I have made up my mind to Put distressed wives Down.  So, don’t be brought before me.  You’ll have children—boys.  Those boys will grow up bad, of course, and run wild in the streets, without shoes and stockings.  Mind, my young friend!  I’ll convict ’em summarily, every one, for I am determined to Put boys without shoes and stockings, Down.  Perhaps your husband will die young (most likely) and leave you with a baby.  Then you’ll be turned out of doors, and wander up and down the streets.  Now, don’t wander near me, my dear, for I am resolved, to Put all wandering mothers Down.  All young mothers, of all sorts and kinds, it’s my determination to Put Down.  Don’t think to plead illness as an excuse with me; or babies as an excuse with me; for all sick persons and young children (I hope you know the church-service, but I’m afraid not) I am determined to Put Down.  And if you attempt, desperately, and ungratefully, and impiously, and fraudulently attempt, to drown yourself, or hang yourself, I’ll have no pity for you, for I have made up my mind to Put all suicide Down!  If there is one thing,’ said the Alderman, with his self-satisfied smile, ‘on which I can be said to have made up my mind more than on another, it is to Put suicide Down.  So don’t try it on.  That’s the phrase, isn’t it?  Ha, ha! now we understand each other.’ 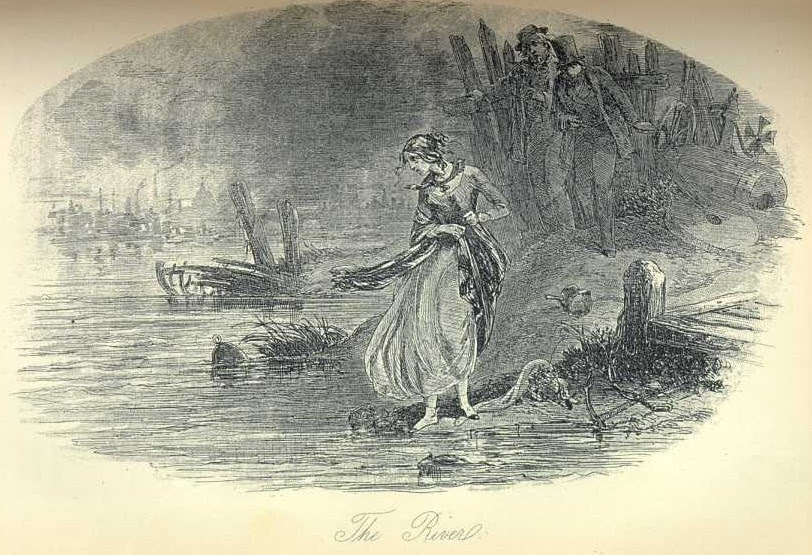 And things only get worse from there.  Poor Meg!  Poor Toby!  And when Toby, looking for solace on a cold New Year's Eve, goes up to the church to hear the bells, and falls to his death, his ghost is shown a future complete with his darling Meg now abandoned, starving, with a newborn, no hope or mercy anywhere on earth, and racing for the river...  Let's just say that The Chimes is so bleak that it makes Cormac McCarthy look like a comedian.  Yes, Dickens does supply the mandatory happy ending, but until then...  it's a treatise on the ultimate result of Victorian economic theory (primarily Utilitarianism and Malthusianism), and a legal system designed to eliminate the poor the hard way. This fun read for the holidays is available for free here: http://www.gutenberg.org/files/653/653-h/653-h.htm

But not all ghost stories were so obviously political or polemical.  Most were just designed to scare people.  The above mentioned M. R. James was very good at this. He said that every ghost story must "put the reader into the position of saying to himself, 'If I'm not very careful, something of this kind may happen to me!'"  Allow me to recommend "Oh, Whistle, and I'll Come To You, My Lad" (http://www.thin-ghost.org/items/show/150).   "Rats" isn't bad, either.


And The Paris Review has a great blog post listing five forgotten Christmas Ghost Stories (check it out here http://www.theparisreview.org/blog/2014/12/19/ghosts-on-the-nog/). Why did the Victorians love ghost stories at Christmas? Well, it was dark and cold and beside a good fire was the place to be.  The nights are extremely long, and all the old, pre-Christian traditions knew that the veil between here and there was very thin around the winter's solstice.  And Christmas Eve - with Christmas Day coming almost immediately - was a time when ghosts could walk the earth and finish their unsettled business, relatively safely (for humans at least).

There was also, among the wealthy, the little issue of gas lighting, still in its infancy, which emitted carbon monoxide, which had a tendency to make people see things.  And, sticking with the wealthy, let's not forget that, in a Victorian world where almost everyone had servants, and yet those servants were expected to be almost invisible, leading to houses with separate entrances, staircases, even hallways for servants, people would be unexpectedly popping in and out of dark places on a regular basis.  Were they always people?

And the poor, huddled around their fire and their candlelight, both sending shadows and ripples of shadows, flickering in the never-ending drafts (there's a reason people - even skinflint Ebenezer - had bedcurtains), squeaky windows, rattling latches, shuddering shutters, and corners dark as the devil's foot...

Speaking of which (and part of what sparked this blog), I recently read a ghost story by Dylan Thomas called The Followers.  I can't find a free e-text, but go check out Dylan Thomas' Complete Short Stories, and enjoy a story that starts out perfectly normal, nothing strange going on, as two young lads try to find something to do on a dull, boring, wet night in a city...  I can assure you, it adheres to Mr. James basic rule:  'If I'm not very careful, something of this kind may happen to me!'

But it's still not as scary as "The Monkey's Paw":  Keep the lights on.

Oooooo! The Monkey's Paw! That's a creepy one.

I'd come to realize Dickens had written multiple ghost stories (The Signal-Man) comes to mind) but I hadn't known the reason why.

Fun post, Eve. Some I'm familiar with, some I'm going to have to check out. Hope you have a very Happy New Year!

A good post. And the Monkey's Paw. That was one of the first dramas I ever say- done by the class ahead of me in school and it made the most terrific impact.
Good New Year's wishes!

Enjoyed this, Eve. Thank you. "Oh Whistle..." is a great one and often has me looking over my shoulder. As a (somewhat) more modern response, may I suggest Fritz Lieber's "The Smoke Ghost"? You'll love it.

Happy New Year, Eve, and to all my fellow SleuthSayers!

Correction on my previous post: It's actually just "Smoke Ghost", no "The" to it. I also misspelled Mr. Leiber's name. Sorry Fritz.

Let me recommend Jerome K. Jerome's novella-sized TOLD AFTER SUPPER, a hilarious collection of ghost story parodies, told at Christmas time. it is easy to fin d on the web. (Jerome was Victorian, of course.). and my "Shanks' Ghost Story" also takes place at a winter telling of spook tales. https://store.kobobooks.com/en-us/ebook/shanks-on-crime

Wonderful suggestions, all! I will definitely check out "Smoke Ghost", "Shanks' Ghost Story", and "Told After Supper". BTW, my first encounter with "The Monkey's Paw" was when I was a kid and watched a TV B&W production. Nearly died of fright.

Ooooo... I love those dark ol' Victorians! Who else would take elaborate death photos of their departed loved ones? Thanks, Eve! I have a sudden craving for some of Miss Haversham's wedding cake!

Eve, as a child, "The Monkey's Paw" was one of my favorite stories. It served me well as a "tell it to the kids" tale when I baby-sat as a teenager.The mandatory sounds of footsteps and knocking on the door at the end brought the required screams and squeals of terror.
At the extended family holiday dinner this year, one of the younger cousins asked me if I could still tell that story so that it made young ones wet their pants. My reply, "Let's go into the den and turn off the lights, and we'll see."
My love of being scared by words has extended to my next effort as the "literary _ _ _ _" that I am. My next release is a collection of ghost stories with my friend/colleague Richard D. Laudenslager in March, 2016.
To all SleuthSayers, both the writers and the readers, I wish you a safe and happy New Year's Eve and a wonderful, successful, creative 2016.

This tradition was completely new to me, Eve. Thanks for posting this!

Fran, my favorite story to scare kids silly is "The Golden Arm". Works like a charm. Can hardly wait to read your ghost stories!

Melodie, a great author from your neck of the woods actually parodied the Victorian ghost tradition. Robertson Davies wrote a book of stories (over many years that he held an admnistrative post at some Canadian university) in which , each year he was visited by the ghost of some Cänadian bigwig. Can't recall the title off hand.

The tradition continues today. British author Ramsey Campbell is a big admirer of M.R. James and some of his stories are in the "Jamesian" tradition, he also likes reading his stories aloud to an audience. The new series of anthologies edited by M. Grant Kellermeyer "The Yellow Booke" features stories "some written in the vein of classic supernaturalists" such as James, suitable for Christmas ghost story reading. (Full disclousure; I have a story in both volumes.) Thanks for the column, Eve, and may all your scares be purely literary!

I saw that same Monkey's Paw movie and was terrified by it. I was telling some friends about it at a slumber party one time in Jr. High and nearly scared them to death. None of us slept very well that night. Truly a frightening little bit of literature.