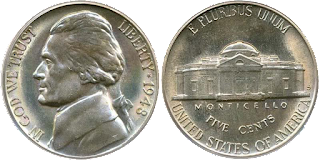 A couple of weeks ago, I saw Bridge of Spies with friends Sharon and Steve. Using desaturated color and retro photography, the film offered a 1950s-60s Len Deighton / John le Carré glance backwards at the Cold War. A sprinkling of fiction and shortcuts found their way into the movie, but over all, it followed the history reasonably well.

Except, one key episode was compressed, condensed, conflated… the part about the hollow nickel. The truth is far more fascinating– and funny– than the script let on.

Rudolf Ivanovich Abel (aka Willie Fisher) never saw the hollow nickel. Instead, it was handled… or rather mishandled… by the clumsy Russian spy who turned Able in.

His name was Reino Häyhänen, a Finnish Soviet Lieutenant Colonel. Recruited by the NKVD, the Soviet secret police, he served in Finland before he was called to Moscow for training and reassignment to the United States where he assumed an American identity of Eugene Mäki.

In Manhattan, his first handler turned out to be Mikhail Nikolaevich Svirin who served as the first secretary to the Soviet United Nations Delegation in New York City. Upon Mikhail’s departure, Häyhänen was turned over to Able/Fisher, code name ‘Mark’.

If you believe the James Bond stories, spies are obsessed with babes and booze, and Lt. Col. partook more than his share. ‘Mark’ complained bitterly about Häyhänen’s lackadaisical attitude, poor work ethic, consumption of alcohol, consorting with prostitutes, and refusal to take spying seriously.

During this period, the Soviets utilized a number of clever spy toys that Q might have envied. One such gadget was a 2-inch screw that itself could be unscrewed, revealing a hollow core in which messages might be passed. These secret containers were left in ‘dead drops’, places unlikely to be thought of as spy caches.

In 1955, the bumbling Häyhänen established a cache in Prospect Park, Brooklyn in a crack in steps of a tenement. Häyhänen dropped in a hollow screw with a coded message awaiting pick-up. However, the landlord proved more fastidious than Häyhänen imagined and filled in the crack with cement. There the message remained encased in concrete until the FBI recovered it two years later.


But this was hardly Häyhänen’s worst flub in what became known as the Hollow Nickel Affair. Häyhänen’s first assignment in the USA instructed him to pick up a hollowed-out coin, open it, and decode the message. Häyhänen managed the first part– he obtained the nickel– but then he promptly spent it before realizing his mistake.

For eight months, the 5¢ piece floated around New York, used for purchases and tips numerous times until an observant newspaper boy received the coin in change on 22 June 1953. That day, fourteen-year-old Jimmy Bozart, a delivery boy for the Brooklyn Eagle, collected subscription fees from ladies at 3403 Foster Avenue, Brooklyn.

As Jimmy jostled the coins, one seemed slightly lighter than the others. He flipped the nickel on the sidewalk where it split in two. Thomas Jefferson departed Monticello once and for all.

Jimmy told a friend, the daughter of a NYC police officer. The story worked its way up the chain of command until it reached a detective who told FBI Special Agent Louis Hahn, who confiscated the coin.

The device turned out to be made of two coins, the front half a 1948 nickel and the back half from a late WW-II issue. A tiny hole had been drilled in the R of TRUST to facilitate separating the halves. Inside, they found a square of microfiche with a numeric message.

For four years, the FBI could make nothing of the code until Häyhänen defected and deciphered the message originally meant for him.

The US knew nothing about this until the USSR recalled Häyhänen to Moscow for good… or bad. Fisher/Abel (aka Mark) had complained of Häyhänen’s incompetence, and at best, Häyhänen would not be allowed to return to the US, which he’d grown fond of. At worst, Häyhänen might have ended up on the wrong side of a KGB interrogation, and he was also fond of his own skin.

As Häyhänen reached Paris on his journey, he resolved not to return to Moscow. Instead, he defected to the Americans who returned him to the US, where Häyhänen proved more helpful than he had with the Soviets. He was able to identify his handlers, dead drops, and the technology the Russians were using. It brought about the exposure and capture of Colonel Rudolf Abel, who was eventually exchanged for Colonel Gary Powers of U-2 notoriety.

And it all began with a nickel that proved a lot less– and a lot more– than 5¢.
Posted by Leigh Lundin at 00:00