The Trail of Tears


A few years back I wrote a book called The Book of Bastards. The following piece on the Trail of Tears was originally intended for that book, but since it centered around a specific incident, rather than around the actions of an individual, it didn't really work thematically. Lately there's been a lot of talk amongst a number of individuals campaigning for the U.S. presidency about registering Muslims, limiting immigration, and basically treating an ethnic and religious minority as second class citizens.

We've been here before.

In light of these emerging and troubling facts, I've decided to include my piece on the scar of Cherokee Removal here, since it's about settlers' interactions with Native Americans, and I a descendant of both white southern settlers and displaced Cherokees, am thankful this holiday notions such as "Indian Removal" quite rightly seem unspeakably barbaric to our modern sensibilities.

Here's hoping they always will. Happy Thanksgiving to all of you and all of yours!


So imagine that you’re a member of one of the tribes of Native Americans that lived in the eastern part of North America when European settlers first landed. Further imagine that instead of fighting the encroaching Europeans, you embraced their technological advances, their way of life, their concepts of God, even of having your own alphabet.

What if, in other words, you did what few if any other tribes tried to do: you tried to straddle a middle ground between your own indigenous culture while adopting what you and the other members of your tribe judged to be the best aspects of European culture? Surely the Europeans, especially those so eager to convert the “heathens” native to the continent, would be pleased and accept you and be impressed by your efforts to both become part of the new country they were building and yet still not lose the distinctiveness of your native traditions, right?

Not if you were the Cherokee Indians of North Carolina, Tennessee, Georgia and Alabama.

And in the end, none of it mattered.

Because the Cherokees had the bad grace to live on land where gold was discovered in the late 1820s. After that it was only a matter of time before the Cherokees, as had their neighbors the Creeks, Choctaws and Chickasaws before them, were pushed off their land.

But the Cherokees had learned much in their study of the ins and outs of white culture. Like any good American who felt they were being treated unfairly, they got lawyers and filed law suits. When the state of Georgia tried to force a cession treaty on them where they “voluntarily” surrendered their lands in the southern Appalachian Mountains, the Cherokees sued. The case, known as Worcester v. Georgia, contested the sovereignty of an individual state with regard to either policing or parceling out Cherokee land, which by treaty right was considered sovereign territory.

This was tied up in court for years, until the Supreme Court heard the case and in 1832 ruled against the state and established as settled law the matter of whether Indians had legal rights to both occupy and control their own land. Several other court victories reinforcing the legal rights of Indians to their treaty lands followed.

In the end it was all for naught. The United States government is separated into three branches, and while the court system has every obligation to rule on and establish the laws, it is the job of the Legislative branch (Congress) to make appropriate laws in the first place, and of the Executive to enforce said laws. Neither the Congress nor the President (in this case Andrew Jackson, a man who initially made his reputation fighting tribes such as the Creek Confederacy as a general of Tennessee volunteer troops) lifted a finger to halt Cherokee removal.

Jackson is reputed to have said: “Mr. [U.S. Supreme Court Chief Justice] Marshall has made his decision, now let him enforce it.” He said no such thing. Instead he noted that “the decision of the Supreme Court has fell still born, and they find that they cannot coerce Georgia to yield to its mandate.”

The end result was the forced removal of most of the Cherokee Nation from their ancestral lands beginning in 1838 (some residual tribal members still live in the region, including a group living on a special reservation in western North Carolina). The route these two large groups of Cherokees followed westward through Tennessee, Kentucky, Illinois and Missouri into what is now Oklahoma became known in the Cherokee language as “nu na hi du na tlo hi lu i,” which translates as “the Trail Where They Cried.” 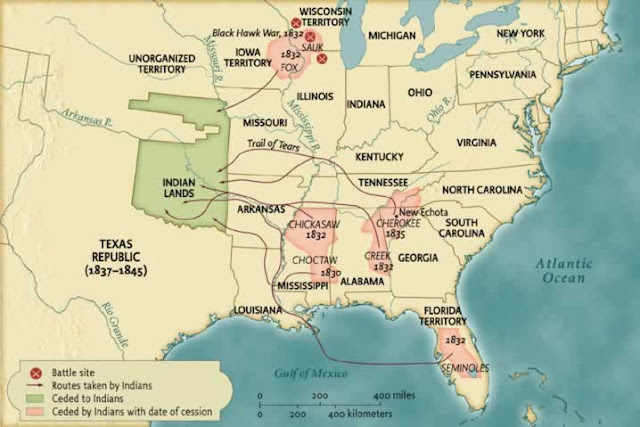 More than 4,000 of the 13,000 Cherokees who made the journey perished on the trail; some were infected with smallpox picked up from used blankets that were given to them by a Tennessee sanatorium that had recently suffered an outbreak of this disease against which the Indians had no immunity. Truly a dark and ignoble chapter in the history of this country–one that continues to be a cautionary tale for successive generations to this very day.

Kinda puts the likes of Donald Trump and his "Muslim Registration" notions into a crystal clear light, doesn't it? Can't say it couldn't happen here, after all.

Because it happened before.

And we all know that "registration" is usually just the first step down a slippery slope toward what in the future will likely be branded a "cautionary tale."

Happy Thanksgiving.
Posted by DoolinDalton at 21:18