Mystery In The Superstitions

As may be plainly seen by looking at the photo below, the Superstition Mountains are quite inviting, and do not appear at all sinister. (He said with a wink.) 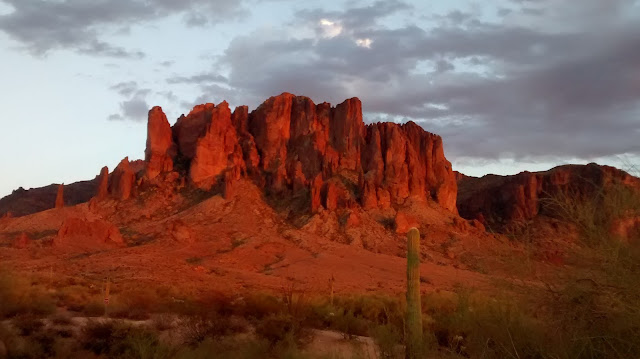 Why then, is this small range of jagged peaks, near Apache Junction, Arizona, so swathed in superstition and murder?

And, though lots of those murders are apocryphal, all too many were quite real!

This is, after all, the spot on the map marked with a big X, if you're one of those folks looking for the Lost Dutchman's fabled gold mine.  (In fact, I took this photo while standing beside a picnic table at Arizona's Lost Dutchman State Park.)

And, that Dutchman figures pretty prominently in Valley lore around here.

Here is a look at just a few of the Valley businesses trading on the Lost Dutchman for the sake of name recognition. 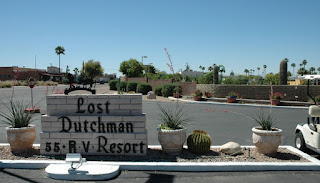 I'm not sure I'd like to park my R.V. in this place.
I might return to find it missing, and not be able to locate it ever again!

There have been numerous books written on the subject, of course. 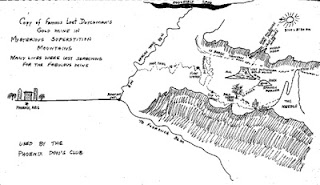 Just as there are plenty of "Lost Dutchman's Mine" maps floating around. 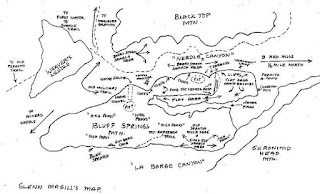 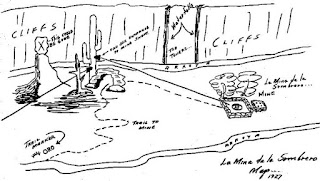 Some with less detail than others. 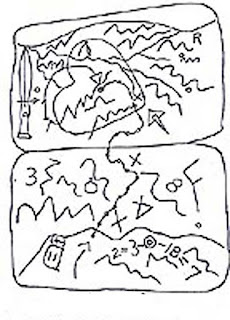 This map (right) is based on some rocks supposedly found in the area.

Evidently, the idea here is that the
Lost Dutchman, adept at wielding pick and shovel, used them to etch his treasure map on a surface more durable than paper. 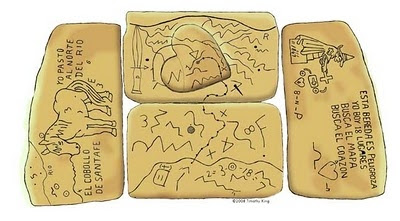 These are the rocks. 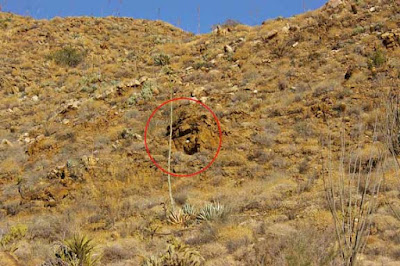 HEY!  You can see something that might be the entrance to a mine, in this photo (right).  Of course, it might just be a cave.  But, is it the entrance to the Lost Dutchman's Mine?

I rather doubt it.

The problem is: The Lost Dutchman's Mine brings out tons of treasure hunters every year.

Most of the time, of course, they find nothing, and then go back home -- with a story of adventure, and maybe even a gold nugget they bought somewhere else.  (The Gold Field Ghost Town -- built while I was off in the army -- isn't far from the mountains.  And, they sell "gold" there, though the last time I saw it, what they were selling was iron pyrite, otherwise known as "fool's gold."  Perhaps that tells us what the owners think of their customers.)

Some contemporary additions to the tale are rather humorous, such as the one in this clip on the left.

Other would-be treasure hunters, however, wind up lost and out of water, in a desert terrain that does not suffer fools or the unprepared gladly.  Among these folks, the lucky ones get choppered out by the Sheriff's Posse.  The unlucky ones stick around, to add their ghosts, and stories of a good person gone missing, to the litany of the Miner's victims.


Around 2010, for instance, a Colorado man came out to hunt for the mine.  His remains were discovered three years later.  He had apparently become wedged in a vertical fissure while climbing one of the walls.  Thinking about his last days or hours on earth is not a pleasant past-time.

Occasionally, however, that old "Ghost Mine" causes REAL problems.

When I was in high school, folks in The Valley began to notice that a lot of people who had gone hiking or camping in the Superstitions were not coming back.  Search parties were sent out.  The Civil Air Patrol overflew the mountains for several days at a time.  But, no bodies were found.

Finally, one search patrol did find a body or two.  And, that body or two had been shot to death.

To make a long story short: A mother and her two grown sons thought they'd found the Lost Dutchman's Gold mine back up in these mountains.  And, perhaps they'd been back there all by themselves for a little too long.  Add in a strong dose of "gold fever" after they thought they'd found the mine -- which, unfortunately, sat not far from a rather popular trail -- and they found themselves having to fend off a formidable number of "claim jumpers."

The story might have been funny, if they hadn't killed so many hikers. 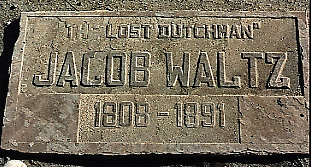 The fact is, however -- even though you can see a picture of that "Lost Dutchman's" tomb stone on the right -- there may have been no Lost Dutchman at all!  At least, not in the Superstitions.

In fact, according to some research, there are as many as 51 versions of the Lost Dutchman legend, many of them having nothing to do with the Superstitions, and some taking place in states other than Arizona.

So, why is this legend so prominent here in The Valley, that folks die over it?

Well, I'll write about that in my next installment.

Meanwhile, if you're coming out to The Valley, and you want to visit a nice picnic or camping area that has nice hiking trails, you might make the drive to the Lost Dutchman State Park.

Just watch out, if somebody starts shouting: "HEY!  HOLD IT, YOU CLAIM JUMPER!"

I had wondered about the name of the mountain.
Plenty of material here for quite a few stories!

My BFF used to live in front of N* Mountain in Lovettsville, Virginia. I do not know the story behind the name of the mountain. There was & probably still is wild ginseng growing up there which sells for hundreds of dollars a pound.

Prospectors have a tendency to turn into the Gollums of the desert, if out there too long. If one of them told me to turn and run, I would. Great article!

You can pick up lots of pet scorpions in that area Thanks for getting me into the feel of the place - I'll be there in Feb!

Janice, the mountain derives its name not just from the legend of the Lost Dutchman, but also because the Apaches considered it a sacred place. According to some accounts, they told the Spanish Conquistadors that the Mountain and it's inner valleys were "The Devil's Playground." The conquistadors' translation may be highly questionable, however. They also thought the Apaches were mining gold here, and that the tribe believed evil spirits guarded their gold resources.

Eve, I'm glad you liked it. And "Gollums of the desert" is a good way to put it. lol

Melodie, I hope to see you there.

I moved to the Phoenix area in 1958 (yes, I am getting a bit gray now, LOL), at a time when the various towns were all widely separated by orange groves, date groves, and large swaths of desert. We lived on the east side of the Valley and the only town with stores for shopping was Mesa, the alternative being downtown Phoenix itself which was pretty far away. One of the first times I ever heard of the Lost Dutchman Mine was there in Mesa, in a shoe store on Main Street. The shoe salesman waiting on us confided with great excitement and in subdued whispers of consipracy that he was only working in the shoe store long enough to get a good enough grubstake to go back up into the mountains, as he had found the Lost Dutchman's Mine and only needed money to fund a lengthy stay there to mine it and also to file his claim. Lots of people used to talk about those things then. But then, it was a pretty different world then as well.

That man wedged in the fissure brings chills. What an awful way to go.

My brothers and I found lots of fool’s gold when I was a kid in central Indiana. The sandstone sparkled like gold or occasionally silver. At least I hope it was fool’s gold! I never did stake a claim.

I enjoy the history and mystery, Dixon.