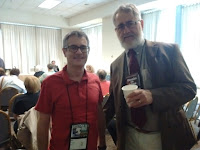 So, I spent a week in beautiful Raleigh, North Carolina.  We tacked on a few days before Bouchercon to attend the launch party for Diane Chamberlain's new book.  As I have mentioned here before my sister is a terrific novelist who happens to live near Raleigh.  This was her first Bcon, and I am happy to say she enjoyed it.

It was at least my sixth (New York, Seattle, Chicago, San Francisco, Long Beach...I think that's it) but I enjoyed it too.  Among the highlights were meeting two SleuthSayers for the first time: John Floyd and B.K. Stevens, and saying hello again to three more: Art Taylor (see proof on the right) , R.T. Lawton, and Barb Goffman.

Last year I reported that one of the highlights was the Author Speed Dating Breakfast, which I attended as a reader.  This year I was back as an author.  I was paired with Craig Faustus Buck, a fine short story artist whose first novel has just come out. (He's the guy brandishing the book in the foreground.) At every table we each had three minutes to explain to the breakfasters why they would absolutely love our books.  Then a bell would ring and we would jump up and charge off to the next table. 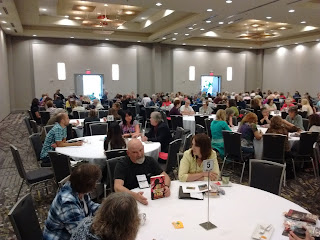 What struck me as most interesting about this was the way Craig and I each changed our patter as we went.  Both of us saw what got a good reaction and what got blank stares and by the end of the two hours we had our pitches down perfectly.  At one of the last tables I suggested that for variety we should each do the other's speech, since we had heard them so often.  Cooler heads prevailed.

Every author attending the Speed Dating Breakfast was required to bring "swag," defined here as something for the attendees to take away.  This ranged from candy to magnets to band-aids printed with the book covers to pouches of lavender to book marks.  Congratulations go to Cate Holahan for the cleverest booty of all: a folder to carry the rest home in!

Another highlight was the panel celebrating the anthology Jewish Noir.  Editor Ken Wishnia led us in a discussion of such subjects as the connection between angry prophets of the Hebrew Bible with  hardboiled private eyes (they all rail against corrupt society, for one thing), and the link between Jewish outsiderness and the noir sensibility.  Ken also discussed the importance of not including every Jewish food you know in every meal in your story.  Not get for your cholesterol or credibility.

I was proud to be one of the contributors to Murder Under The Oaks, the second Bouchercon anthology.  The eighteen or so authors who were present formed an assembly line, signing copies for hundreds of people who apparently failed to get the publishing industry's email explaining no one reads short stories anymore.

I even attended some panels I was not on.  (You may think that's a joke.  The biggest problem at Bouchercon is Buyer's Regret.  Whatever you choose to do, and no matter how much fun it is, you will wonder if you should have been doing something else... so I skipped a panel on short stories to have tea with SJ Rozan, one of my oldest writing buddies, for instance.  Can't clone myself yet.)

There was a panel on pairing your protagonist with the right antagonist.  Most of the participants denied that their books had typical antagonists at all.  Someone asked whether the writers had ever met anyone they considered truly evil.  The two who immediately replied that they had were Mark Pryor (a prosecuting attorney) and Diane Chamberlain (a former psychotherapist).  I guess they would know, huh? 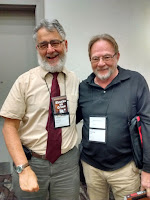 There was a wonderful panel in which masters were asked which classics of the genre influenced them.   They all digressed into the non-classics they loved as well.  Bill Crider said: "I love the old sleazy paperbacks where the titles all ended in exclamation points."  Lawrence Block replied that he had always wanted to sell that company a novel titled One Dull Night!

I had another favorite moment but I can't tell you about it, because, heh heh, I will put it into a short story in the near future.  So you will have to wait until I get it written, edited and published.  Three, five years max.

Okay, this is getting too long.  Next time I will give you my inevitable collection of quotations from the festival, and I will offer one complaint about my favorite book convention.