Just as I was about to sit down and type my column for this week, which would've dealt with a totally different subject (something dutiful, involving writing and mystery fiction), it occurred to me that the piece was scheduled to run on October 31. I slapped my forehead, ditched my notes, and changed course. No one can resist writing about scary things on Halloween.

And some of the scariest things I've seen in my life--my life has, I confess, been pretty uneventful in the excitement department--have happened in movies. 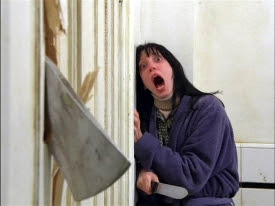 A quick note, here, about genre categories. Despite what we're told on imdb.com and Netflix, I'm not at all sure that films like Misery, Cujo, Duel, Jaws, Hannibal, etc., are horror movies. They might be frightening (Annie Wilkes and her sledgehammer gave me the hibbiejibbies for weeks afterward), but it might be more accurate to label those examples as suspense, or adventure. Horror films, to me, should have otherworldly elements, like Night of the Living Dead, The Birds, Invasion of the Body Snatchers, Frankenstein, The Dead Zone, Paranormal Activity, The Thing, Nosferatu, The Mist, Trollhunter, The Shining, Dracula, The Ring, The Sixth Sense, A Nightmare on Elm Street, and so on and so on. And let's face it, some of the most terrifying stories are those about insane people, because they could actually happen: The Silence of the Lambs, The Night of the Hunter, Magic, American Psycho, The Texas Chainsaw Massacre, etc. Humans are sometimes the best (worst?) monsters.

Anyhow, without further ado, here are my top ten scary (not necessarily horror) movies, rated according to how high I jumped out of my recliner or my theater seat when I first saw them. 1. Psycho -- I believe the most frightening moment in movie history occurred when Norman Bates's mother swung around in that chair in the root cellar, 55 years ago. Bernard Herrmann's music helped.

2. The Exorcist -- The scariest scene in this one, for me, was when Father Merrin appeared at Regan's home in Georgetown, introduced himself to her mother and Father Karras, and then climbed the staircase to confront the devil. The whole time this was happening, if I remember correctly, we could hear the demon upstairs, roaring and lowing and calling the priest's name. Whoa, Nellie.

3. Halloween -- This movie probably isn't on anybody's "best" list, but it was seriously creepy, in part because of John Carpenter's outstanding soundtrack. It still gives me goosebumps when I hear it.

4. Alien -- I saw this in an Atlanta mall, on an IBM trip, and the guy who was with me almost passed out when Alien Junior popped out of John Hurt's tummy. The sequel, Aliens, was a better movie, but what made Alien so terrifying was the steady buildup of tension and dread, and the fact that the audience never even saw the creature until near the end of the story.

5. Wait Until Dark -- I saw W.U.D. in college, and I remember the entire theater screaming at one point, when Alan Arkin leaped out of the shadows to attack a blind Audrey Hepburn. In my writing courses I often refer to this movie as an example of the use of foreshadowing and suspense.

6. The Others -- Not many folks seem to know about The Others (not to be confused with The Other). I watched it via Netflix, with one of our sons, and it scared the hell out of both of us. It contains one particularly bloodchilling scene. 7. Poltergeist -- Another film that I saw on a work trip, this one to Dallas. This is Spielberg at his best, and it's hard to get better than that.

8. The Howling -- Unlike Poltergeist, this was not a great movie (few werewolf movies are), but it was truly scary. I was dumb enough to watch it at home alone on TV at about two a.m. on a summer night, which meant the back windows onto our patio were open and I could hear the night sounds outside. I didn't do that again.

9. Cat People -- The 1982 version of Cat People is a guilty pleasure, and I love it. If the opening credits don't give you the willies, you're braver than I am. Wonderful soundtrack, and the city of New Orleans (which can be spooky anyhow) has never been spookier.

10. The Omen -- I've never been fond of kids-in-peril stories, but here the kid's the villain. Sort of. The most disturbing scene in this film involves an actress named Holly Palance (Jack's daughter, if you're a movie buff).


That's the top of my creepy/crawly list. Any agreements? Disagreements? And more importantly, do you have any recommendations? I included only those movies I myself have seen; several that I've not yet watched but are on my soon-to-be-viewed list are The Babadook, The Cabin in the Woods, and 28 Days Later. Give me more.

I'll close with a goofy poem I wrote twenty years ago--it was published in a 1995 issue of Mystery Time magazine, and is titled "Stress Management":

I have a long history of reading a mystery
Each night before going to bed;
They're scary and tense, but I have enough sense
Not to let such things mess up my head.

At least I thought so, till one night a psycho
Leaped into my room, eyes ablaze;
It was just my dog Lad. but by then I had had
An accident in my PJ's.

Now should that deter a booklover? No sir!
I still read a lot, if the tone
Is funny and light, if it's not late at night,
And if I'm not home all alone.

The same holds true for movies.

Have a great Halloween.