Where Cattle Are King

In the great western films, the cattle baron may be a hero or a villain.

But, he is nearly always male. 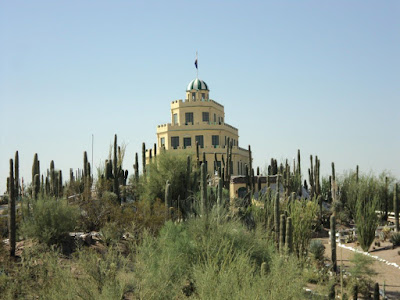 
These are the names normally provided when visitors to Phoenix ask, "What is that odd building?"

And, visitors DO ask.

Primarily because this house, once home to the locally famous Tovrea family, who were Valley cattle barons, is tucked right into a curve of the loop 202 freeway not far from Sky Harbor Airport.  Though the photo below is several years old, it provides a good view of the 202 curving around the top (north) end of the photo to run north-south along the eastern edge of the old Tovrea estate.  The castle, or mansion, is sitting on that raised hill near the center of the photo. 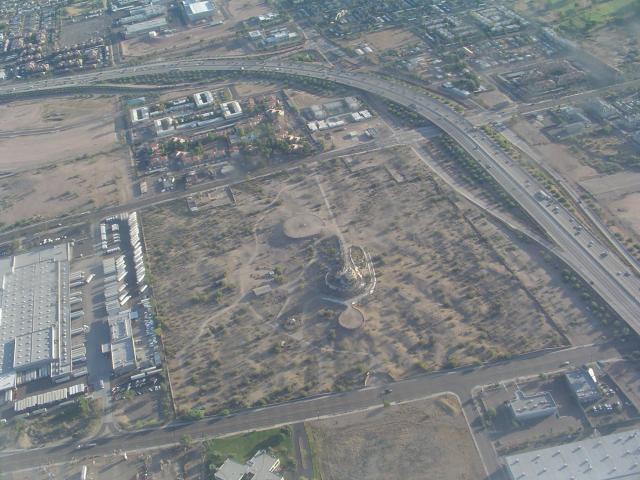 The road near the top of the estate (north end) is Van Buren, while the one running past the bottom or south end is Washington.

Incidentally:  That facility bordering the west side of the estate -- the one with all those white semi-trucks parked around its perimeter, and located on the left side of the photo -- is the main Phoenix post office.  This is about where the stockyards used to start, which did not make for heavenly scented air in or around the castle's location.

This, at least, was the opinion of Alessio Carrero who had made a sheet metal fortune in San Francisco after migrating from his native Italy.  In 1928, having also become a successful land developer, Alessio moved to Arizona with the dream of turning the area we see in that photo above into a subdivision and adjoining resort called Carrero Heights.  What we now call Tovrea Mansion (or castle) was initially slated to serve as a hotel.

The problem was:  The place stank.

Oh, it was pretty, alright.  But, the Tovrea stockyards and meatpacking plant sat right next door.  And that Tovrea facility was NOT SMALL.  In fact, it was a world-class operation, one of the largest packing plants in the U.S.  The company, founded by E.A. Tovrea, who began his cattle career at the age of ten, had the motto: "Tovrea - Where Cattle Are King!"


Though Carrero tried to buy Tovrea out, in hopes he might make his development work, such was not to be.  There are those who say Mrs. Tovrea liked the looks of that hotel Carrero had been building on a desert knoll not far from the stockyards.  On the other hand, there are those who say it was E.A. who had his eye on the place, and that his wife fought like a wildcat to keep from having to live so near to thousands of head of beef.

Whatever the truth, the hotel and the land around it changed hands in 1931.  E.A. and his wife moved in soon after, turning it into their home, though E.A. lived little more than a year longer.  His wife, Della, would stay on in the home until her death in 1969.

There are those in The Valley who speak of a curse, because robbery and murder seems to track certain Tovrea family wives.

Which is why I mentioned Tovrea Castle at Correro Heights (as it is now formally known) here on Sleuth Sayers.  As I mentioned once before, I intend to post articles about crime scenes of interest to those who might attend Left Coast Crime in Phoenix this upcoming Feb. 25th through 28th.

The castle, and the associated restaurant below are fairly nearby the hotel where the conference will be held. 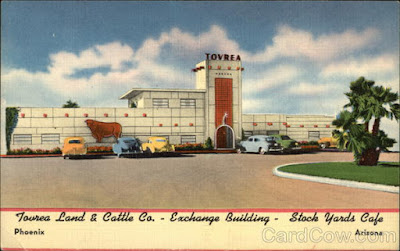 The Tovrea Castle society runs wonderful tours through the old home, as well as the adjoining cactus garden, each day.   Additionally, you might want to spend an evening eating a great dinner at the old "Stockyards Restaurant" a place first opened as a cafe within the company's office building.

That building still stands to today, and the Stockyards Restaurant is still going strong -- along with a nice bar.

I'll be getting to those crimes I mentioned, in the next installment.