What is it about Jack the Ripper that continues to excite our collective imagination? The murders took place in 1888, after all, a hundred-and-twenty-five years ago. Everybody involved is long dead, the victims, the surviving witnesses, the cops, the newspapermen, the actual killer. 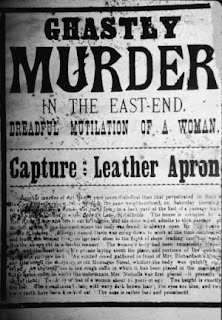 Well, foremost, the case has never been solved. There's an enormous canon of literature devoted to it. If you go the Ripper casebook website, http://www.casebook.org/, they name over a hundred possible suspects.

Secondly, it's widely considered to be the first documented serial killer case - although this in isn't true. Jack, however, generated a boatload of newsprint, and the image of a demented vivisectionist stalking Whitechapel for unlucky whores took hold.

More particularly, though, it probably is the first case to involve criminal profiling. In the late 1800's, forensic psychiatry didn't exist. Forensics of any kind, crime scene analysis, was primitive. Preserving the chain of evidence wasn't even on the radar. But in the Ripper case, a police surgeon speculated the killer was a 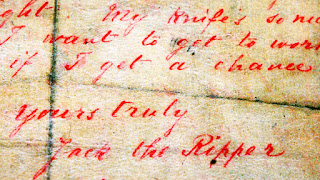 A couple of recent mystery thrillers explore this dynamic, David Morrell's MURDER AS A FINE ART (and its sequel, INSPECTOR OF THE DEAD), and Stephen Hunter's I, RIPPER. Morrell's book isn't about the Whitechapel killings, but a guy mimicking the Ratcliffe Highway murders, which took place seventy-odd years before the Ripper. Hunter's book, as you can tell from the title, is very much about Jack.

It's interesting that two not entirely dissimilar writers have both chosen to do historicals, and Victorian era historicals, at that. I understand the attraction. It's also interesting that both Hunter and Morrell come at it from a somewhat similar perspective. Not a modern one, mind. There's nothing a-historical or anachronistic about their approach. But the period they've chosen is one of huge impending change. The coming of rail travel, say, the Industrial Revolution in full cry. Income disparity, the crushing burden of poverty, the displacement of populations and the rise of dense urban environments. All of this contributes to the rise of a phenomenon like the Ripper. And what the two writers both do, entirely convincingly, is to work out how you'd look for a killer's footprint, the shadow he casts. This is forensic science before it had a name. Reading the runes, or bottling smoke.

When we talk of Dickensian squalor, it's really a kind of shorthand, and an avoidance mechanism. It's hard for us to imagine how squalid and brutish life in the London slums actually was, in Victorian times. Social inequities were extreme, and the Ripper became a metaphor - a gentleman, it was said, preying on the weakest of the underclass. Jack embodies a nameless dread, an entire ruling class of predator. He prefigures, not the Ted Bundys of this world, but gangster capitalism. He represents a stacked deck. 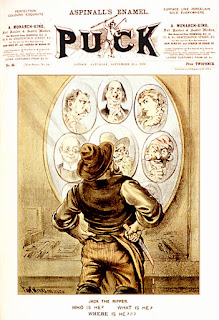 Why was he never caught? Police incompetence, for openers. They weren't equipped to deal with somebody like Jack. Yes, he was a pattern killer, and there was method, and opportunity, and most importantly, repetition, but the cops never established his template, and he slipped the noose. Then again, there's the more sinister theory that Jack was a member of the Establishment, some go so far as to say a collateral cousin of the Royal Family, and a scandal had to be prevented. Because we have the lingering question of why the murders stopped. Maybe they found the guy, but his social position protected him, so instead of going for a short dance on a stiff rope, he wound up in the booby hatch. Which might go some way toward explaining why Jack has such a long shelf life. He eludes us. Not simply because it's the most studied of cold cases, and unresolved even today, but because he himself seems written in water.

Not so, his victims, In death, they have a disturbing physicality, exposed to the naked eye. Mary Jane Kelly was the last of the five, and a police photograph exists, the disemboweled girl lying in her bloody sheets. You can find the picture at the link below, but I won't post it here.
https://en.wikipedia.org/wiki/Jack_the_Ripper#/media/File:MaryJaneKelly_Ripper_100.jpg


Posted by David Edgerley Gates at 00:00

I think the visual appeal of the era before powerful urban lighting is another attraction as well as the absence of all the technology that weakens the human dimension in some modern crime novels .

Another excellent example is Will Thomas's recent book in his fine historical mystery series. 'Anatomy of Evil' explores old theories alongside recent discoveries.

One of my favorite books on Jack the Ripper is Richard Wallace's "Jack The Ripper: Your Light-Hearted Friend", which says that Jack the Ripper was really Charles Dodgson, a/k/a Lewis Carroll. It's total BS, and makes me seriously wonder about Wallace's mental health, but it's interesting in its own way. And it makes me believe that most of the speculations about who he was are of the same caliber.

Personally, I think the reason the murders stopped is that Jack died. Because God knows there were about 1001 reasons/ways that people could die in Victorian England, from septicemia (from a cut on the hand, a crushed foot, bad appendix) to a bad meat pie, from typhus to cholera, from any of the things we take for granted that antibiotics and/or surgery can cure us of. I think he simply died. And no one ever knew, because he actually was someone very unimportant, very under the radar, just one of the hundreds of thousands of the struggling poor swarming the filthy streets of London.

Going along with Karen's and Eve's comments as well as the premise of David's article, I find the theories fascinating. About the time I'm convinced some author got it right, another comes arrives on the scene.