"If you mention sex at an AA meeting, even the non-smokers light up."
--Father Tom, "Learning to Live With Crazy People"

And so do a lot of mystery writers and readers.  There are those who write and/or love cozies, and want everything as asexual as they think Agatha Christie was.  Except, of course, that if you actually read your Agatha Christie, there's a lot of hot stuff going on:  In AT BERTRAM'S HOTEL, Ladislaw Malinowski is sleeping with both Elvira Blake and her mother Bess Sedgwick, and that fact alone is one of the major drivers of the plot.  In SAD CYPRESS, Roddy Welman's sudden, overwhelming attraction to Mary Gerrard makes everything homicidal possible.  And, in at least three novels, a man's lust for one woman, combined with his lust for money, makes it possible for him to marry and murder a rich wife.

Then there's the noir crowd: 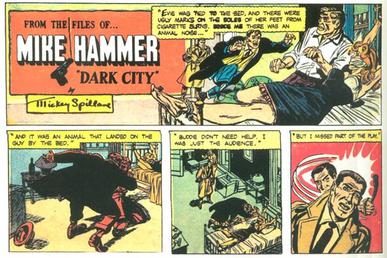 “It was a blonde. A blonde to make a bishop kick a hole in a stained-glass window.”
― Raymond Chandler, FAREWELL, MY LOVELY

“I loved her like a rabbit loves a rattlesnake.”
― James M. Cain, DOUBLE INDEMNITY

Brigid O'Shaughnessy: “I haven't lived a good life. I've been bad, worse than you could know.”
Sam Spade: “You know, that's good, because if you actually were as innocent as you pretend to be, we'd never get anywhere.”
― Dashiell Hammett, THE MALTESE FALCON

In noir, EVERYTHING is about sex.  That and greed.  But mostly sex, and often violent sex. (Prime examples are probably the "rip me" scene of James M. Cain's THE POSTMAN ALWAYS RINGS TWICE - and Mickey Spillane's VENGEANCE IS MINE, in which - and I think it's the first chapter - he beats a woman before having his way with her and she loves it all.)  The noir guys all moon over the virgins (Walter Huff over his victim's daughter; Mike Hammer over Velda), but the women who obsess them are anything but. And so of course they hurt them, twist them, torture them, betray them, all of the above.  Truth is, after a long day in noir-land, you want to yell at them, "Try somewhere else besides a bar to meet women!   Buy the girl some flowers!  Try to stay sober for ten minutes!" but it's all a waste of breath.  (Except, apparently, to Nick Charles who got a clue and a rich wife.)

Spy stories, of course, depend on global locales, tech wizardry, constant weapons, supervillains, and a high body count for both sex and death.   Women, women, women, of all ethnicities, although Russian spies are a perennial favorite.  (Is it the accent, or the idea of nudity and fur?)  I just read a novel in which the male American spy and the female Russian spy were mutually obsessed, madly, madly in love/lust/etc., to the point where I really thought that the cover should be of her holding him against her exceptionally large chest, hair flowing like a female Fabio...  Anyway, sex drives these plots as well, no matter what the spy or the supervillain think, because - besides providing objects of rescue, thus securing another reason for the ensuing sex - 90% of the time at least one of those women is going to save the male spy from certain death. The game is to figure out which one by, say, page five.

So, to all of those who say that mysteries are all about cerebral detection, and that there isn't much place for sex in them - WHAT ARE YOU TALKING ABOUT?

As Oscar Wilde once said, “Everything in the world is about sex except sex. Sex is about power.”