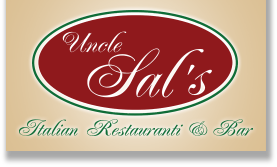 Left Coast Crime will be convening at the Hyatt Regency of Phoenix, Arizona February 26th - 28th,2016.

Knowing that LCC attendees lurk on this blog, and suspecting some of them might like to take their own self-guided tour of the Phoenix historical crime scene, I've decided to post some articles this year that would lend themselves to just that use. 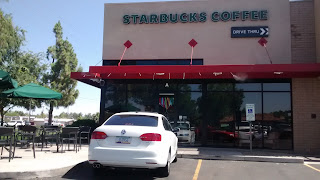 Across the parking lot from this unassuming Starbuck's where my son and daughter worked in high school, and less than a quarter mile from the house I grew up in, sits this place: 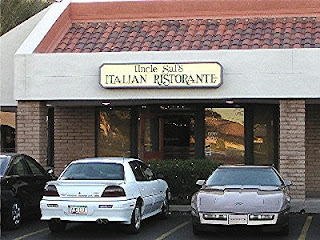 At first glance, the contemporary cookie-cutter strip mall location and hole-in-the-wall frontage might indicate Uncle Sal's is one of those Italian restaurants run by somebody about as Italian as my Polish grandmother.

In truth, however, this is the place once owned by the wife of Salvatore "Sammy The Bull" Gravano, who billed her restaurant as: "The best kept secret in Scottsdale," Sammy the Bull loved to eat here, and it was frequented not only by members of his family, but -- reputedly -- also by drug dealers, underworld figures and the like.  (On several occasions, my mom and I enjoyed the pizza there, when I was home on leave from the army.)

Gravano had been given plastic surgery to alter his appearance, then he and his family moved to The Valley in 1995, as part of the witness protection program following the John Gotti trial.  The former member of the New York based Gambino family was rechristened "Jimmy Moran."  He opened a construction company called Marathon Development at 45th Street and University drive in Phoenix, where he employed 15 people and earned nearly a million dollars a year.  He also did business as Creative Pools, a pool installation company.

All of this came to an end in 2000, when Sammy the Bull, as well as his wife, son and daughter were arrested as part of a sting on organized drug dealing in The Valley.

Salvatore (then living as Jimmy Moran) reportedly provided consultation and cash to the drug-dealing arm of the "Devil Dogs" a Phoenix gang known for barking as they beat people up.  It was further reported that pool company and restaurant employees were involved in the dealing, and that drugs were being sold out of Uncle Sal's.  Salvatore was eventually convicted, and sentenced to 19 years in prison.

Uncle Sal's is still there, of course. And, if you'd like to go get a bite
to eat and look around the place, I think you'll enjoy your meal.  The bar is nice, and so is the food.  You can even eat on the patio.

Outdoor temperatures should be quite comfortable during the LCC period in February. 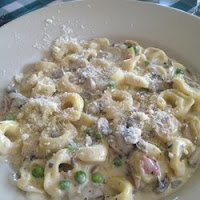 While the pasta is good here, the steak is my favorite.  The green bean side is excellent!


Dress is casual during the day, and business casual in the evening.  If you want to pull out the stops and dress to the nines, they'll love you for it! 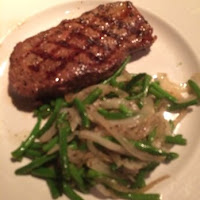 Pricing is not bad either.  A single person can enjoy the steak in the photo to the right and some beer or wine and still get out the door for under fifty bucks. 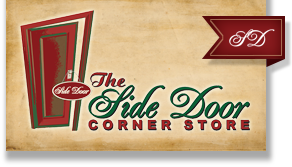 According to his daughter, Gravano ate at Uncle Sal's regularly, often sneaking in the back and sometimes taking his food to go.  There are those who suspect his practice provided the catalyst for the opening of this second eatery, which shares the same kitchen with Uncle Sal's, and is known as: The Side Door.


If your wallet doesn't tend to be over-stuffed, and your culinary tastes run toward good beer, burgers and dogs (And perhaps you'd secretly like to get a feel for what it was like for Sammy the Bull to sneak in the back for his chow while the Feds were closing in!) then I suggest you walk around the north end of the building that houses Uncle Sal's and eat here.  They sell Vienna Beef hot dogs for only $4.00 each -- or, Chicago style for six bucks!  There is also a large selection of beer on tap or in bottles, as well as a large wine selection, and some higher-end food -- even ice cream!


Overhead View of Strip Mall with Uncle Sal's and Side Door 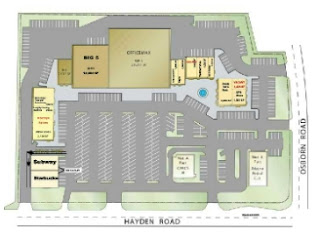 This photo is taken looking west.

Osborn Rd. is on the right side of the photo, while Hayden Rd. runs across the bottom.  The building at the lower left is Starbucks.  The large main building is Office Max and Big Five sporting goods.

If you walk around the north (photo-right) side of this building, you will find The Side Door at the west (photo-top) end of it, facing out to the north.

Do not be confused by the bank building (lower right).


Fastest way there from the Hyatt Regency Phoenix