by Dixon Hill
A few posts ago, I mentioned that my wife had bought me a new chair.  I explained that, prior to that moment, I had been sitting in a plastic lawn chair to do my writing.

I write on my apartment's second-floor balcony, which overlooks trees, green lawns and a fountain pool below -- not to mention the barbecue pavilion I frequent several times each week burning steaks, chicken, jalapeno poppers (That's not a typo: J-poppers are hollowed-out peppers stuffed with cream cheese, etc. and wrapped in bacon.  When the bacon and peppers are good and black, they're done.), hot dogs and/or burgers for dinner.

At the time, several folks suggested they'd like a look at some photos of where I do my writing.  (Which, I have to admit, is also where I primarily do my reading.)

Taking people at their word, I decided to post pics of my writing area today -- sparse as it is.

Though I think the view is quite nice, it's starting to warm up here in the Valley of the Sun, so I've put up a shade screen that I let down once the sun gets over the yardarm.

Thankfully, I can still look out through the patio's openings.

I would caution the reader that I have never been known as a particularly "neat" person, having one friend who used to bring his dog over to my bachelor apartment, when I was in the army, so said dog could "surf"  used pizza boxes across my living room floor while my buddy and I watched his favorite bass fishing shows on TV.


Marriage, however, perhaps like music, has tended to sooth some of the savagery out of this particular beast.  So, my writing aerie is kept in much better shape than the apartments or dorm rooms of my single years. 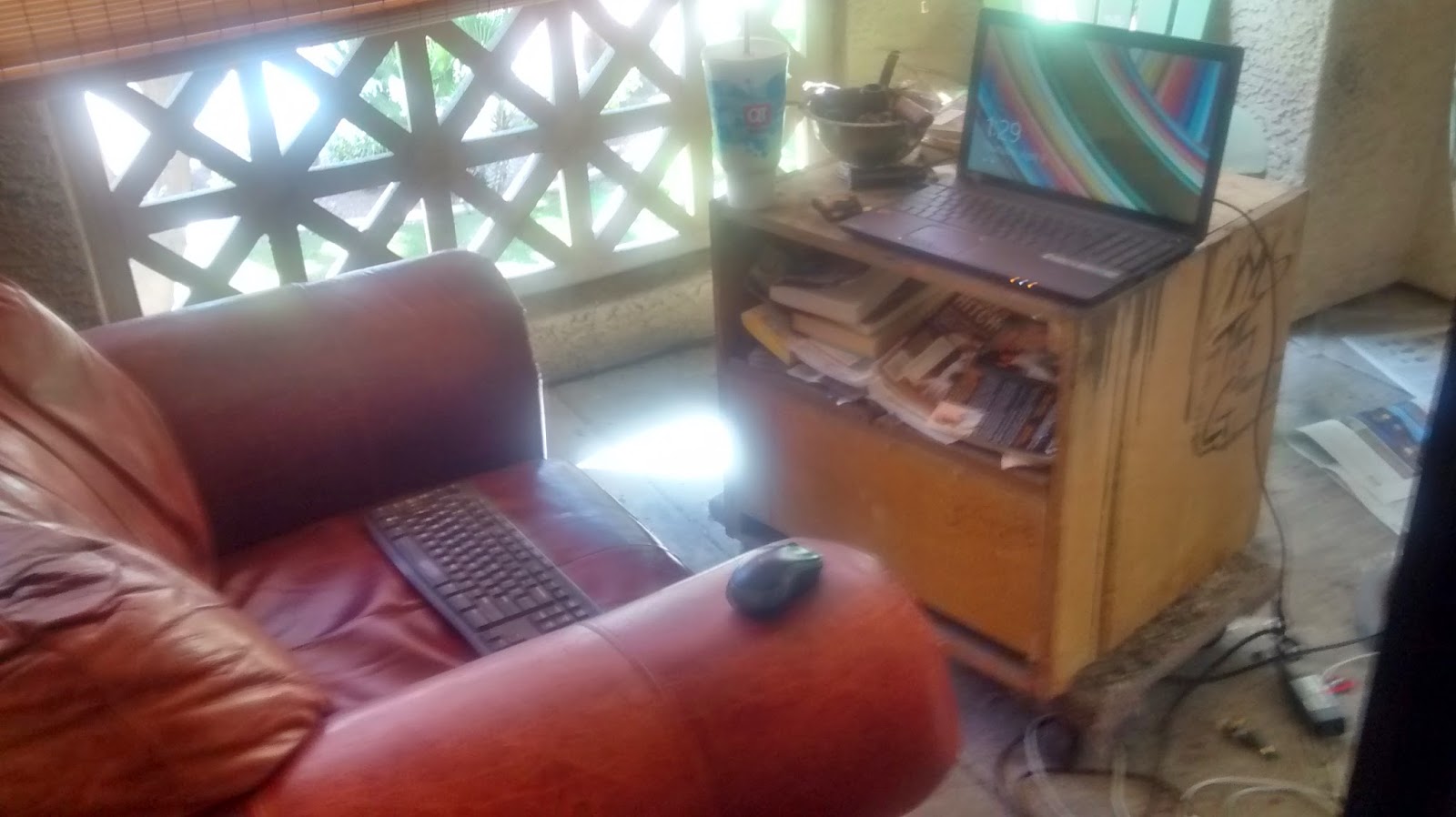 Having kids around naturally helps clutter the issue.  The newspapers on the floor, in the far right of this photo, were put there by my 12 year old, Quentin, who has been constructing a costume for the upcoming Phoenix Comicon.

And, yes, those are books stashed under the top shelf of my rolling desk -- along with magazines and other reading or reference material.


Below, you see the spot I actually occupy while writing: Diet Coke, cigars and pipe on my left, laptop computer more-or-less in front of me, keyboard on my thighs with the mouse on the right arm of my chair, fan in the background to keep the computer cool as the desert temperatures rise, and a nice view of the green lawn below through the X-braced trellis-looking detail in the center of the balcony wall.

Well, that's it.  This is my writing space.

Now I'm waiting to see some of yours.