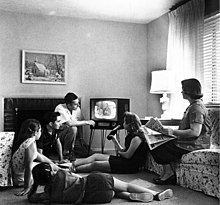 Sometimes when I settle down in the evening in front of the television I think back to the origins of this strange little device that we have welcomed into our homes over the past 65 or more years.

Television actually got its start even earlier, in the 1920’s, and for several years what was the first television station sending out commercial broadcasts, WGY – broadcasting out of a General Electric plant in Schenectady, New York -- contented itself with showing Felix the Cat riding around on a turntable for two hours a day.  But regular commercial broadcasting likely dates from 1948, the year that Texaco Star Theater starring Milton Berle became the first “must see” TV.

The early years of television saw an avalanche of new programming hit the airwaves, some original series and some transplanted from the about-to-be-supplanted radio airwaves.  Mysteries were a staple of radio and many moved readily to this new medium as well.  Included in this rush to offer televised entertainment were three different series featuring my personal favorite, Ellery Queen, making the jump from radio.  Ellery Queen series variously aired on the old Dumont network, as well as on ABC and NBC.  These early television attempts at conquering the whodunit were a far cry from NBC’s 1975 Ellery Queen series that graced the Thursday and then Sunday night schedule for one short year.  The 1975 series is now available in a great DVD collection, but most of these early Queen televised adventures are now lost to us – they were either performed live, or on lost kinescope tapes.  You can read about them, and their radio predecessors, either in Francis Nevins magnum opus Ellery Queen:  The Art of Detection, or on Kurt Sercu's website Ellery Queen:  A Website on Deduction.  But watching those early shows, that's another matter.  Well, maybe . . . .  There are always exceptions, bits of the past lurking out there ready to be discovered (or re-discovered) by the intrepid detective.

So step with me, now, into Mr. Peabody’s wayback machine, as we set the dial for November 8, 1951.  When we get there, get comfy on the couch, or on the floor with a pillow.  Pull the popcorn bowl up close.  All eyes on that magnificent 9 inch black and white screen as we eagerly await tonight’s Ellery Queen adventure -- “Murder to Music.”

Note that Dale Andrews returns to SleuthSayers the last Sunday of the month, commencing 25 January 2015.
Posted by Dale Andrews at 00:01