It Was a Dark and Stormy Night

"I'm sorry, so sorry.  I should have told you.  Let me  go.  No one will ever know.  You'll never see me again.  I'm begging you: please, please let me go!"
The fearful pleading had no effect on Shug, nor did the sheer terror on Carly's face.  Shug no longer wanted to be parked in a tiny sports car with Carly--much less during a horrific storm--but his maniacal rage was directed as much at life as it was toward Carly and the weather.  Shug closed his eyes and slapped himself frantically, repeatedly pounding his hands against his face, wide-spread fingers beating against ears that couldn't stand hearing Carly's words.
Lightning streaked through the darkness and into the car, illuminating Carly's anguished face and naked body.  Screaming unidentifiable words, Shug pulled a .38 from under the driver's seat.
"No! Oh, God, no!" Carly shouted and grabbed at the door handle, but it wouldn't work.  Tried the window control.  Still no way out.  Hammered at the glass with clenched fists--desperate to escape.
"Bye, bitch," Shug said and pulled the trigger.
Once. Keerack! Twice. Keerack! Three times. Keerack!  The harsh stench of gunpowder filled the air.  Torrents of crimson gushed from the crater in the back of Carly's head.  Gobbets of bloody tissue spattered on the shattered glass.

"Dead as hell."
Those words echoed in Shug's mind as his trembling hands clenched the steering wheel, trying to hold the battered old Ford on the road.  Wind whipped against the vehicle and rocked it from side to side.  Worn wipers battled against rain sheeting the windshield.  He gave up on reaching his destination--a wooded area on the other side of town--and stomped the brakes.  The car slid across the empty street before skidding to a stop beside the gutter.
"Damned sure dead as hell," Shug whispered while looking into the rear at Carly's naked remains."Not she . . . it.  That dead body is an it," the killer thought.  Its arms ended in bloody stumps, and the smooth legs bent awkwardly, obscenely.  Shug stepped out into the rain and opened the back door.  Streaming water splashed the corpse as he struggled to pull it from the Ford.  His muscles burned from the strain.  Carly's body felt heavier than when he'd moved it from the sports car to Carly's battered old Ford.  The carcass plopped in the gutter.
Just as well.  The front of the head was a big mess of bloody tissue and bone--leaving no clue to what the victim had looked like.  This pleased Shug and brought more shrill laughter from his lips. No face, no clothes, no hands.  The appearance had lied just as much as the garments had.  Carly didn't deserve to be identified.
The .38 lay on the front seat.  Shug reached across for it and dropped the gun onto the pavement before sliding back into the car.  Soaked to the bone, he shivered.  The full quotation returned to his mind as he drove away from the abandoned remains and weapon.
"The guy was dead as hell."
They were the opening words of an old Mickey Spillane novel that Shug had sneaked out of Father's private bookcase and read as a child.  A recent issue of one of Shug's literary magazine subscriptions had stated that Charles Dickens's "It was the best of times; it was the worst of times" in A Tale of Two Cities was the finest opening sentence ever written.  Screw that.  "The guy was dead as hell" was much better.

"Darn! Darn! Darn!" Rain pounded the windshield so brutally that Katie Wray couldn't see the lines on the superhighway, even when lightning brightened the night sky.  She'd almost run off the road when she exited I-26 onto I-95.  Now she could barely distinguish the exit to Walterboro.  Best get off the road and find a room for the night.
As she swerved onto the exit lane, the car hydroplaned into a spin.  Katie forgot everything she'd ever known about handling skids and screamed as she lost control of the vehicle.
Miraculously, the movement stopped with the passenger side of the car slammed against a retaining wall.  Katie patted herself to see if anything were broken or bleeding.  She'd probably have some bruises from the seat belts, but the air bags hadn't inflated.  She shook herself and lost some of the anger she'd been carrying against the rental agent for not having a compact available and forcing her into their most expensive rental--though possibly one of the safest--a Mercedes.
The loss of that fury made room for Katie's rage at her sister Maggie.  A long day of delayed flights had left Katie worn out and eager to be off the plane when it landed after eleven o'clock that night.  All summer long, her sister Maggie had used Katie's apartment and new Fusion free of charge--while promising to meet her at the Columbia Metropolitan Airport when Katie returned to South Carolina.
Katie realized she should have planned to come home for a few days between her summer tutoring out west and returning to work at Tanner Elementary School. "Weary."  It was an old-fashioned word, but it described how Katie felt--totally exhausted.  She'd looked forward to sleeping during the three-hour drive to her hometown, Tanner, South Carolina.  Instead, she was battling a terrible rainstorm in a rental car at three in the morning because her sister Maggie had let her down as usual.  Katie didn't even consider that Maggie might have forgotten.  They'd spoken by phone right before Katie boarded the plane.  Like so many times before, Maggie had chosen to do something else instead of meeting responsibility.
As she walked around the car to look at the damage, Katie stumbled.  No tires had blown, and nothing seemed to be seriously bent though there was definitely some cosmetic damage.  The Mercedes appeared driveable.
Whoosh!  An old Ford came out of nowhere and nearly hit her.  Katie hadn't seen it before it sped around her.  She felt assaulted.

If you're still with me (and I hope you are), you've just met two of the main characters in Kudzu River as they appear in the first chapter. I'm already being asked, "Why'd you quit cozies?" The answer is that I haven't quit cozies; I've added thrillers and a horror that is scheduled for publication in 2015.  There's another cozy (but it's not a Callie) half-done on my computer and another horror haunting my mind.

The questions about genre lead me to a question for fellow SleuthSayers and readers today:
Why do you write? Though some writers become wealthy, there are millions more who don't.  What makes us write?  My answer:  To me, writing is similar to playing dolls when I was a child.  I create an environment and characters and then I'm free to manipulate them however I please.  The difference is that my doll characters are not all Barbies, but I'm still having fun controlling them. Does that mean that psychologically I have "control issues"or does it mean, in Madonna's words: "Girls just wannna have fun"? 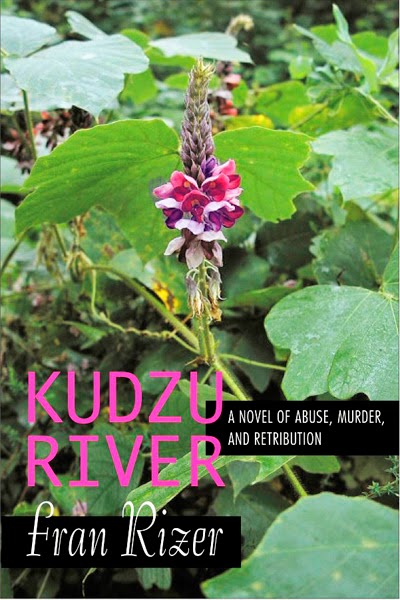 Kudzu River is a novel of abuse, murder, and retribution. It's a tale of a serial killer and how his actions entangle the lives of three women. Odyssey South Publishing is releasing it January 6, 2015.
Until we meet again, take care of . . . you!