by John Floyd
I'll start off with a fact gleaned from writer Stephen Follows's blog: More than half of the top 2000 films  of the last twenty years were adaptations. The rest, of course, were original screenplays and remakes. I see a lot of all three, and I plan to see a lot more--but with regard to movies adapted from novels, I do always try to read the book before watching the movie.

Why? Simple answer: Because the book is usually better. Also, I like to be able to picture the characters, settings, etc., in my own mind first, rather than seeing instead the result of what was in someone else's mind.

If all that's true, one might ask, why bother to watch the movie at all? That's an easy one, too: I want to see how the filmmaker's view compares to my own. Besides, as I've said, I just like movies. And sometimes--not often, but sometimes--what I see on the screen turns out even better than what I saw on the page. 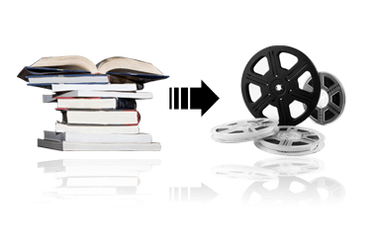 I think a good adaptation is when a piece of fiction, novel-length or short, great or terrible, is transformed into a good film.

Several categories are involved, here. And--as always--the following lists are based on my opinion only.

1. Disappointing book becomes a disappointing movie: Dreamcatcher, Scarlett, Eragon, The Bridges of Madison County, The Reivers (I know, I know, it won the Pulitzer--but still), The Time Traveler's Wife, Battlefield Earth, Love Story, The Da Vinci Code, Message in a Bottle, The Betsy, The Valley of the Dolls. (NOTE: "Disappointing" doesn't necessarily mean "of poor quality." It just means "disappointing." To me.) 2. Book is better than the movie: The Stand, The Bonfire of the Vanities, The Great Gatsby, Congo, One for the Money, Great Expectations, The Haunting of Hill House, Ender's Game, The Golden Compass, Dune, The Hobbit, Mind Prey, Live and Let Die, Striptease, Tell No One, The Hitchhiker's Guide to the Galaxy, It, The Pillars of the Earth, Sphere, The Scarlet Letter, Timeline.

4. Good book becomes an equally good movie: Mystic River, The Searchers, The Silence of the Lambs, The Grapes of Wrath, To Kill a Mockingbird, Jaws, The Dead Zone, The Caine Mutiny, The Eye of the Needle, Shane, Rebecca, From Russia With Love, Misery, Giant, Papillon, The Maltese Falcon, The Princess Bride, Magic, Hombre, Out of Sight, From Here to Eternity, Cool Hand Luke, Sands of the Kalahari, The Cider House Rules, The Big Sleep (1946), The Hunt for Red October, Gone With the Wind, A Time to Kill, Presumed Innocent, One Flew Over the Cuckoo's Nest, Old Yeller, The Guns of Navarone, Life of Pi, The Lord of the Rings, The Green Mile, Jurassic Park, The Hunger Games, The Hustler, The Road, On Her Majesty's Secret Service, The Prince of Tides, Jackie Brown, The Day of the Jackal, The Help, Holes, Flight of the Phoenix, Appaloosa, Third Man on the Mountain, No Country for Old Men, Get Shorty, Death Wish, The High and the Mightry. (And, according to R.T. Lawton's SleuthSayers column yesterday, Enemy at the Gates. I've seen that movie but I've not read the book.)

There are obviously many, many more, but my head's beginning to hurt, and yours probably is too. Can you suggest others, in the above categories? Do you disagree with some of my choices? (My wife certainly does.) Should I stop buying books at garage sales and cancel my Netflix subscription? All opinions are welcome.

Observations from the cheap seats

Note 1: A lot of outstanding films have been adapted from--believe it or not--short stories. Examples: Rear Window ("It Had to Be Murder"), High Noon ("The Tin Star"), It's a Wonderful Life ("The Greatest Gift"), 3:10 to Yuma, Brokeback Mountain, Duel, Stagecoach (The Stage to Lordsburg"), Bad Day at Black Rock ("Bad Day at Honda"), The Swimmer, Minority Report, It Happened One Night ("Night Bus"), 2001: A Space Odyssey ("The Sentinel"), The Legend of Sleepy Hollow, The Fly, Don't Look Now, The Secret Life of Walter Mitty.

Note 2: Good novellas usually make good movies. Why is this true? I think it's because a novella-length story most closely fits the length of a screenplay. Short-story adaptations (unless they become short films, or "episodes" in TV shows like Twilight Zone or Alfred Hitchcock Presents) require the screenwriter to add a lot to the originals--and novel adaptations (unless they become TV miniseries like Centennial, Roots, and Lonesome Dove) require the screenwriter to leave a lot out. Examples of excellent novella-based movies: The Old Man and the Sea, Double Indemnity, The Mist, Apocalypse Now (Heart of Darkness), Stand By Me (The Body), The Shawshank Redemption (Rita Hayworth and Shawshank Redemption), The Thing (Who Goes There?), The Birds, The Man Who Would Be King, The Third Man, Hearts in Atlantis (Low Men in Yellow Coats), The Snows of Kilimanjaro. Most of these were able to remain fairly true to the source material.

At the moment, I'm looking forward to watching several recently-released and upcoming films based on novels: Gone Girl, The Maze Runner, Mockingjay, The Hundred-Foot Journey, and Horns. Will they be good or bad? Better than their books, or worse?

Who knows. You pays your money and you takes your chances.