Today is June 9, 2014. How did it get to be half a year so quickly. We just had Christmas last week, didn't we? No, that was Valen...no, my birthd...no, Mother's Day. Man time flies when you're having fun and even when you're not.
Never really thought I'd like to be a writer, particularly, but I always liked to write and always made perfect grades writing essays or stores for English classes. But I decided to be an X-ray technician when I was about 12. I started to X-ray School on Monday morning after I graduated from high school on Friday night.  I enjoyed my career of diagnostic x-ray and radiation therapy. But after kids were almost grown, I began writing mostly for myself. Eventually, I thought I'd write a book.

Guess I wrote about half of a novel before I realized I had no earthly idea how to write or complete a novel. My late husband, Elmer and I lived in Houston, think this was about 1980, and were fairly close to a library. So I got myself over there and checked out an armload of books to How To Write, mostly how to write a mystery. Oh, yes. Always knew it would be a mystery and it would be a female private eye book.

The book was titled, April Anger and my main character was Jenny Gordon, P.I.
John D. MacDonald had books with color in the titles. This was just before Sue Grafton came out with "A is for Alibi." Someone else had numbers, don't remember who, but just thought months would be a good take. After I read Sue's Alibi and the "B is for Burglar" was on it's way, I still felt that months would be the way to go.

After studying the how-to books and following as many directions and tips as I could cram into my brain, I completed my first novel. This was written mostly in long-hand on a yellow legal size tablet, then transferred to print with my electric typewriter. If I'm not mistaken, I had managed to acquire an IBM Selectric.  Some of you may remember it had a print ball than danced around as you typed the words.

One of the Houston TV stations did a little news story about a writing conference held at Rice University. It was a two day event and I could stay at the University's Hotel college. The cost was something like $80. Right then I didn't have the extra money to attend. I was really upset but, I saved my money for a whole year and then registered for the Southwest Writing Conference. In the meantime I kept writing.

It was a great conference, featuring a number of editors and agents from New York. They held classes and gave great advice and the main thing you were networking. These editors and agents would pull your book or story from the slush pile once they got back to NY because they had met you in Houston.

I remember an agent from Avon paperback books telling us a story about going to conference after conference and aspiring writers asking for the secret to getting published. She said they wouldn't believe that you had to write well and write a different and intriguing story. We all nodded, more or less believing that it was true, that there had to be some magic formula or some magic answer to getting published.

Finally, she asked someone in our class to check to see if anyone was standing outside or around our door. Someone checked then she said, in a hushed voice, "I'm telling you all the secret. But you can't ever, ever let anyone know I told you because I'll get fired."

In a voice, barely above a whisper, she said, "When you sent your manuscript in to me, put the stamps on  upside down."  We laughed a bit and realized she'd been putting us on. "You'll never know how many envelopes full of manuscripts I got that year with upside down stamps on them." Of course, these were the days when you sent a full printed copy of your manuscript to an editor. But only after you sent a query letter and they responded yes, you may send your mss in to me.

At that time, there was another way, if you didn't have an agent to send your mss to an editor and that was to send it in cold 'over the transom'. In the very early days, an editor's room had a door with a small window that could be opened for air circulation. Supposedly someone could throw an mss over the transom into what was called a "slush pile." The slush pile continued but it came from the mail room and a pile of opened manuscripts were put on the editor's desk. Every so often the editor would go through that pile and for one reason or the other, interesting title or great first paragraph and
on this rarest of occasions the editor would find a manuscript they liked and would buy it. A few years after that an editor told me, she once had to buy a mss because it had too many coffee stains on it where she had placed her mug and she was too embarrassed to return it in that condition. Take that statement with a grain of salt. It could be true, I knew the editor fairly well and I could see her doing something like that.

I wound up attending the SW Writing Conference three years, they were held in August. An editor from Wichita Falls City Magazine greeted me and we discussed a short story I wanted to send to her.  In December, she called me and said she wanted to publish my story. In fact, it had already been published and she was sending me copies and a $100 check. I was thrilled to say the least. A couple of months later, another editor I had met published a humorous article in a little magazine that went out all over the country to be local businesses magazines. I got a check for $85 for that.  Neither of these were mysteries but they were publications. I was sure I was on my way.

Good thing I didn't quit my day job because I didn't sell anything else for five more years. I did have two mystery short stories published both in small subscription magazines. The first was in Detective Story Magazine and featured my private eye investigators, Jenny Gordon and C.J. Gunn, titled "Kiss or Kill." In fact, the story was chosen for the cover. I looked in my bookcase and found a copy of the magazine and hope I'll be able to put them at the end of this article.

The second story was published in Dark Starr, "A Friend To Remember." Also found that one in my bookcase. And guess what I had forgotten the story so I had to reread it.  Both stories were published in 1989.

Those all really are some of my good old days as an aspiring writer. 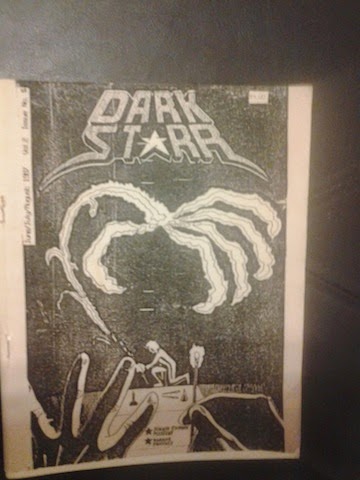 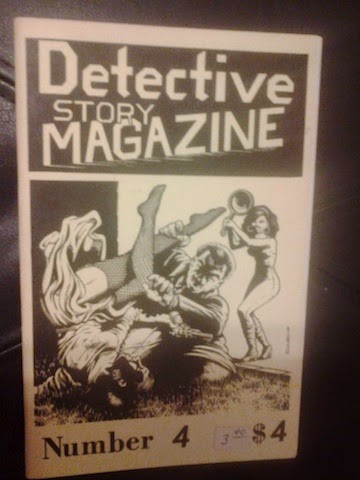