When I read stories in an anthology, I check mark the ones I want to reread. Looking over the table of contents of the anthology of literary crime fiction, Murder & Other Acts of Literature, I realized I had read only three of the stories and had marked only one for rereading. “By A Person Unknown,” a puzzling story by Egyptian writer, Naguib Mahfouz (1911-2006). Mahfouz was the first Arab writer to be awarded the Nobel Prize for Literature (1988). 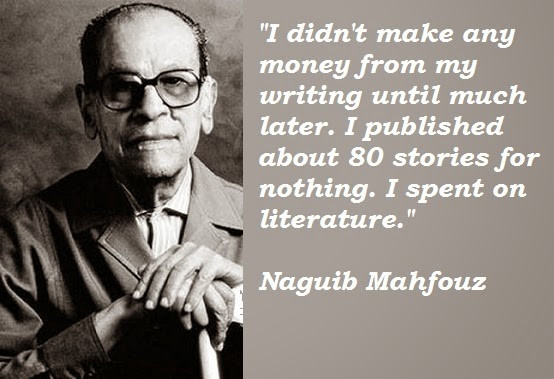 In the foreword, editor Michelle Slung explains why she compiled the anthology: “The most fun about compiling a book like this one is finding the stories themselves, with some tracked down like rare specimens and others hiding in plain sight.” Reading the foreword reminded me why I marked Mahfouz’s story for rereading. It is a rare specimen.
“By a Person Unknown” is a police procedural about a serial killer terrifying a community in Cairo. The only clue is the mark of a cord around the neck of each of the six victims. Unlike most serial killers, except for the mark, there is no pattern to the killer’s modus operandi. The killer “makes no distinction between old and young, rich and poor, man and woman, healthy and sick, a home, a tram, or a street.” The lack of clues takes its toll on the investigating officer who believes, “The sole accused in this case is myself,” because he cannot solve the case.
The superintendent of police, feeling that he must prevent further panic, concludes news of the murders will no longer be published because “news disappears from the world once it disappears from the press.” For him “Life must go on as usual, people must go back to feeling that life is good--and we shall not give up the investigation.”
I’m not sure if the story is about the emotional toll the investigation takes on the investigator or, considering the superintendent’s decision, Egyptian politics, especially since Mahfouz has acknowledged that most of his writings deal mainly with politics: "In all my writings, you will find politics. You may find a story which ignores love or any other subject, but not politics; it is the very axis of our thinking.”
No matter the subject, “By a Person Unknown” is a rare specimen because it has no ending , or least not a satisfactory or appropriate one. Nothing in the story suggests the killer’s identity or that he or she will be caught despite the ongoing investigation. Nevertheless I enjoyed the story, and I’ll probably continue to think about it because I’ll reread it a year from now to again puzzle over the meaning.
After I finished the story, the first descriptive word that came to mind was ambiguous (personal or political), next absurd (a crime “has been committed without a criminal”). I’m still wondering if either of the adjectives applies.


As usual, I’m probably over-analyzing. Does meaning really matter if I enjoyed the story?