Who hasn’t dreamed of flying? To oversimplify the classic interpretations of flying dreams, Freud saw them as symbolic of sexuality, while for Jung, they signified freedom and transcendence. We live in an era in which sexuality is out in the open, while freedom and transcendence are still hard to come by. Although I’m a shrink as well as a writer, what interests me most about dreams is how they feel: gloriously exhilarating and utterly convincing, so that I wake thinking that maybe, just maybe, I could fly in waking life. 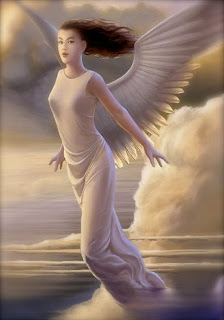 My favorite fictional descriptions of flying appear in Sharon Shinn’s Samaria series, which appears in the first book to be fantasy but is revealed over the course of the series as science fiction, albeit brilliantly character driven and superbly plotted. The beings who share the planet Samaria with humans are known as angels. They have powerful wings that allow them to fly to great heights from which they use their glorious singing voices to intercede with the god on behalf of the people.

He ascended effortlessly into the opalescent whiteness of the cloudless morning sky. Higher and higher, aiming straight for the zenith of the heavens, so high that even to his superheated blood the air seemed cool; so high that beyond the blank blueness of the sky he could sense an eternal, waiting night….Aloft in the icy air…Gabriel flung his arms wide and began to sing. He could hear every sound, this high up: the rhythmic stroking of his great wings, the brief catch and intake of his own breath, the faint sluicing of blood through the canals of his ears. – Sharon Shinn, Archangel

Because of the rain, she had flown in low, and now she spiraled upward over the broken mountain. The air was treacly, clinging to her wings with actual malice; she had to fight her way higher to get as far above the storm as possible. Even after she cleared the worst of the rain, the air about her felt dense and unforgiving…. Usually, this far above the earth, the air currents felt alive; even before she started singing, she would hear the echoes of her wingbeats batted from star to star. – Sharon Shinn, Jovah’s Angel

She flung herself aloft…and beat her wings against the sullen air….It felt good to fly, to unfurl her clenched wings and feel the thick, viscous ocean air lay its cushions under her feathers. – Sharon Shinn, The Alleluia Files

She…drove her wings in short hard sweeps against the air…She was aware of the steady, rhythmic beating of her wings, the tensing and relaxing of the sinews across her back, but nonetheless she felt like she was floating through the air. She…drifted peacefully across the broken terrain, silent and light as milkweed, circled once over the rocky margin of the shore, and settled easily a few yards from the sea. – Sharon Shinn, The Alleluia Files

I’d be happy to tell you that in my dreams, I soar high into the sky like Samaria’s angels. But I don’t. In my most consistent recurring dream about flying, I hover about three feet from the ground and have to push at the air with my hands in a kind of dog-paddle to stay up. When I try to remember more, the image that springs to my mind is the sidewalk in front of my parents’ house in Queens. My interpretation: I started having this dream when I was so young that I wasn’t allowed to cross the street. But you know what? It still gives me an enormous sense of freedom—the phrase “ability to escape” floats into my mind as I write this, and you’re welcome to interpret that however you like—and I’d be thrilled if I could really do it. I wake from this dream thinking, “How hard could it be? If I just push against the air....”

What are your dreams of flying like?
Posted by Elizabeth Zelvin at 00:01