by David Edgerley Gates
Way back when (and I mean wa-a-a-y back, in the late Bronze Age), my 4th grade teacher was Miss Sheehan.

There were something like twenty of us in the class, maybe a few more, and a roomful of nine-year-olds, pretty much equally divided between girls and boys, must have been an unruly bunch, but she managed us well, not with iron discipline, either, but by holding our interest. One of the tools in her kit was to read aloud to us, THE BORROWERS and THE LION, THE WITCH, AND THE WARDROBE, for instance, but the one that sticks in my mind is THE SARACEN'S HEAD, a book by a guy named Osbert Lancaster.

Re-reading it, all these years later, I'm struck by the fact that it wears so well. One thing is that it's very mischievous, the kind of story that a grown-up can read to a kid, and not get bored. It's about a guy who goes off to the Crusades, very reluctantly, we might add, but the journey makes a man of him. He starts out a figure of ridicule, basically a sissy, bullied by his formidable mom, and comes back bronzed and confident, a wimp no more. 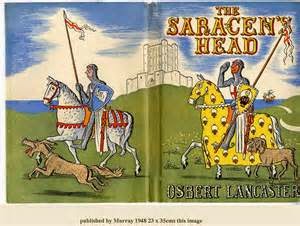 Lancaster uses the conventions with a healthy dose of irony. The castle the hero sets out from, on the South Downs, is called Courantsdair. His father, Sir Dagobert, dies as the result of being shot from a catapult at the siege of Limoges. The guy who sends young William off to the Holy Land is one Abbot Slapjack. And so on. Lancaster illustrated the book, too, and the pictures are terrific, filled with sly detail. There's an undercurrent of casual cruelty, as well, and a fair amount of arterial spray, more than satisfying to a bloodthirsty fourth-grader.

We decided to dramatize it. (In retrospect, of course, I can see Miss Sheehan had this up her sleeve the whole time, and we were only persuaded it was our own idea.) Here's where her genius comes in. We didn't use a script. We all knew the story. So with all the speaking parts, the hero, his mom, the cousin he's supposedly engaged to, the Saracen warrior and his manservant---my role---the beautiful Greek princess young Sir William rescues, the attendant lords and ladies, we improvised the action and the dialogue.

It was an involved undertaking, costumes, and props, the whole nine yards, so everybody was in on it, onstage or off. And here's another thing. After rehearsals, we put on two actual performances, one for the so-called Lower School, grades one through six, and one for the Upper School, seventh through twelfth, but it was for us---our parents weren't invited. In other words, you didn't have a bunch of adults jockeying for position with their Kodaks, embarrassing the cast, so we had fun. The play was a great success, both times. We hammed it up no end, and had 'em rolling in the aisles, and not because they found us foolish, either. I'm speaking here of the Upper School, the older girls, who probably thought themselves too sophisticated for a fourth-grade production, but they got into it. For one thing, they got the jokes and puns, which went over the heads of the first, younger audience.

The point I'm making here is about method. By giving us free rein, and letting us trust our instincts, Miss Sheehan allowed us to inhabit the story, and make it our own. It was a transforming experience, for me, anyway, and I think for everybody else. I don't know if another teacher has ever influenced me as much as she did. Somebody once remarked that a good teacher shows you where to look, but they don't tell you what to look for, which is a lesson for a story-teller. Let it seize you.
Posted by David Edgerley Gates at 01:00