Recently Aeden, my fourteen-year-old grandson, discovered Edgar Allan Poe.  When I picked him up from school, he immediately began telling me about this "cool" story he'd read about a man who walled up his nemesis.

When I asked, "The Cask of Amontillado?" he informed me that I'd pronounced "Amontillado" incorrectly as it was "an Italian word with the the 'l' sound silent." (Leigh, does the fourteen-year-old in your life right now just love to "correct" you?)

I informed him, "Edgar Allan Poe grew up in the South– Richmond, Virginia– and probably pronounced the 'l' just as I did."  Then I recommended that he read "The Tell-Tale Heart," and teased him he could pronounce those "l"s however he liked. Since the story is long out of copyright, it was possible to pull up the entire text on the computer.  We went from there to BaM, where I bought him the almost 2,000-page Complete Works of Edgar Allan Poe.  I drew stars by the titles of stories and poems I think best.  An avid reader when he was young (self-taught at age three), Aeden has been into other hobbies for the past couple of years.  I'm pleased to say he's back to reading for pleasure and has asked, "Who else of those old people wrote such good stuff? 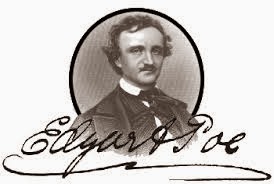 Aeden is not the first young person I've known who became interested in literature because of Edgar Allan Poe. Years ago, I taught a fifth-grader who had no interest in much of anything.  Not yet twelve-years-old, he was with a gang and in school only because Youthful Offenders required him to be there.  One morning he met me with a tattered copy of an old book.  After explaining that he'd found it while helping clean out his recently deceased grandmother's house, he said, "I want you to read this poem."
It was "The Raven."  Then he asked, "Do you have any more poems by this man?"  He later asked me if it were true that Poe married his thirteen-year-old cousin, which he did.

I won't bore you with a long report on Poe, his life, and his works.
If you want to know more than you do, check out the life section of the Poe Museum webpage.  https:www.poemuseum.org/life.php

Remembered for his lyrical poems and short stories, he also wrote numerous critiques and newspaper articles as well as one novel. MWA uses bobble-heads of Poe are most likely because he is credited with inventing the modern detective story, but he also was an innovator of the science fiction tale.  What might he have done if he'd lived past forty?

As some of you know, I love jokes and cartoons.  I can't move forward without sharing these with you:


Poe isn't my real topic for today. I'm sharing my goals in writing.

Recently, I've been running in circles so far as what I want to write. I'm still tweaking my horror novel; I'm half through a thriller; and I'm sixty pages into a new cozy series.  For the first time in about twenty years, I wrote a poem last week.  I've been doing some soul-searching, and I don't know what the heck I want to do.  No, I have no illusions that any of my writings will ever become as well-known or as lasting as Poe's.

But--I've determined what my writing goal is.  I'd like to write something that would have that kind of impact on a reader.  It doesn't have to sell for a lot of money nor be remembered over a hundred years. I'd just like to have a reader want to read more after reading one of my efforts.

Perhaps I already have that with Callie's repeat readers, but I need to do something new and worthwhile, not necessarily children's literature, but good enough to inspire a young person to read more.