Crime stories have a hard time being humorous. Sometimes they are, and sometimes that works; a few of my alltime favorite films--Raising Arizona, The Big Lebowski, A Fish Called Wanda, etc.--are sort of based on criminal activity but are primarily comedies, not mysteries. Now and then, though, you come across a real crime story, one that's more concerned with suspense than laughs but that delivers the humor anyhow, the kind of humor that lurks just below the surface. Those movies and novels (1) never seem to take themselves too seriously, and (2) are often overly violent. (Who knows, maybe the folks who make them can get by with the ultra-violence because they don't take it all too seriously, and they know the viewer won't either.)

For those who might enjoy this kind of story, here are ten mystery/crime/suspense movies that I've recently either discovered or re-watched that I think fall solidly into the category of quirky. It should surprise no one that four of these are Coen Brothers films and that another four came from the delightfully scary mind of Quentin Tarantino--and it should also be no surprise that I liked them a lot. Anyhow, here's my list, with the best ones first: 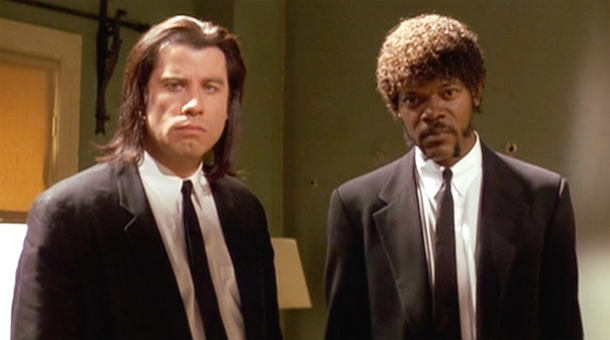 1. Pulp Fiction. By now an oldie, but still a goodie. Sam Jackson's scripture-quoting scene will always be fun to watch. Especially interesting to me was the fact that the story wasn't told in sequence--it kept jumping back and forth.

2. Fargo. Another Oscar-quality quirkfest. How could a movie not be good with characters like these, one of whom ends up in a woodchipper? Yah, you betcha, I know whatcha mean there, Lou . . .

3. Blood Simple. A movie not many folks seem to have heard about, but if you've seen it you'll never
ever forget the scene with the window and the knife, near the end. Trust me. 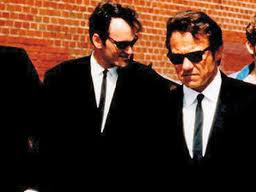 4. In Bruges. Another film that never generated much buzz. It features the wackiest group of killers since Get Shorty.

5. Reservoir Dogs. From Mr. Blue to Mr. Orange, this is an edge-of-your-seat, can't-believe-what-just-happened story. I've seen it maybe half a dozen times, to make sure I did believe it.

6. Kill Bill. I'm cheating a bit here, because it took two movies to actually kill Bill: KB and KB2. Both were over the top, featuring everything from swordfights to snakes to live burials to Ennio Morricone themes.

7. True Romance. This really is a romance, sort of, but not exactly The Bachelorette. Tarantino's script includes another of those absolutely unforgettable scenes, this one between Dennis Hopper and Christopher Walken.

8. Miller's Crossing. An unsung triumph: great characters, good plot, and as crazy as . . . well, as crazy as Joel and Ethan Coen.

9. Before the Devil Knows You're Dead. From the old saying "May you be in heaven half an hour before, etc." Yet another movie that few folks have seen or heard about.

10. Burn After Reading. Zany performances and surprises at every turn. George Clooney hasn't made many bad movies, and this one was great fun to watch.

Possible runners-up: Seven Psychopaths, The Mexican, Bottle Rocket, The Pawnshop Chronicles, Grindhouse, and Django Unchained. And yes, I realize Django-U was more western than crime/suspense, but if we're talking quirky, it's right up there with the rest.

My wife, I might mention here, has not seen any of these (except Fargo), and is not likely to. In fact I think she's convinced that my IQ, which probably isn't high to begin with, drops a few points with every viewing of this kind of film. Maybe it does--but what can I say? I love this stuff. Maybe it's a guy thing.

Can you think of other goofy or otherwise outrageous suspense movies? Suggestions are welcome--there's plenty of room for more guilty pleasures in my Netflix queue.

In the BREAKING NEWS category: I'm pleased to report that over the past two days I've received acceptances for new short stories at The Strand Magazine, Woman's World, and The Saturday Evening Post. And yes, all three tales are quirky …
Posted by John Floyd at 00:01