Born Bad. Or Not.

I am, hopefully, on vacation for the next two weeks (mostly off-line), so here's something to chew on for a while.

Many people think philosophy is an esoteric subject, a plaything, a hobby, irrelevant to daily life: but the one place where the rubber hits the philosophical road is when it comes to criminal justice.  Basically, there are only two theories of how human beings tick:  (1) we're born bad; (2) we're not.  In the Western World, these were the (classical - not current!) Conservative v. Liberal views.  In Asia, this is Legalism v. Confucianism.  In every world, it's the divide between (1) those who believe that human beings need to be kept under tight control, with strong laws and punishments and (2) those who believe that humans respond well to education, encouragement, rehabilitation.  Original sin; good at heart.

This is more than a question of religion or philosophy.  It's also a question of laws.  The idea of  "innocent until proven guilty" was first postulated in Ancient Rome - but it did not apply to slaves, which were a large percentage of the population (some calculations say 40% during the height of the Empire).  And in the Dark Ages and Middle Ages, it crumbled entirely, as crime became linked with sin, and the general impression was that, at the very least, if accused, you had to undergo some kind of trial to prove your innocence.  Walk on burning coals; drink contaminated water; hold a red-hot poker for a certain length of time; sink when thrown in the water.  If you were innocent, your burns would heal without festering, you would not become ill or die from the water, and someone would fish you out before you drowned.  If your burns went gangrenous, if the water made you sick, or if you floated, you were guilty, and you would be punished, usually by death.  It wasn't until Cesare Beccaria's 1764 book "Of Crime & Punishment", that sin and crime were unlinked, with the idea that perhaps sometimes you stole because you were hungry, not because you were evil.  He said some fairly radical stuff:  that the corruption and injustice of society could provoke criminal activity, that punishment should lead to rehabilitation, and that capital punishment should be abolished.  Yes, he was a softie.  He was also the first to be called a "socialist" - although it didn't have today's connotations. 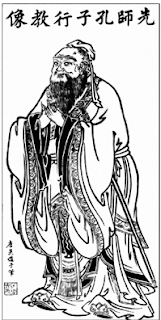 In the East, in Asia, Confucius (551-479 BCE) said that men were educable, and perfectable.  That we are indeed born good at heart, and as such persuasion and education were what was needed.  (This did not apply to women or servants:  "if you are too familiar with them, they grow insolent; if you are too distant with them, they grow resentful."  Awwww....)  He was a great believer in benevolence (ren), ritual a/k/a in correct behavior (li), and, of course, filial piety (xiao).  Perfect fidelity to these three things would lead to a perfect man, from whom one could find the perfect rulers, including that elusive philosopher king that everyone since Plato has been seeking.  Confucius was the basis of almost all Chinese education, political science, economics, and law until Mao's Cultural Revolution in the 1960's.  And there was a resurgence after the death of Mao.

Confucius' antithesis was Legalism, which argued that men are basically selfish, fundamentally amoral, and barely worth the trouble of ruling them.  One of the chief Legalist philosophers, Han Fei Zi (280-233 BCE), said that the purpose of government was to serve the interests of the ruler, because men were such beasts they couldn't recognize good government when they saw it.  (We have a local civic leader that likes to remind everyone that we live in a Republic, not a Democracy, and thus we don't have to be told everything that's going on...  Legalism lives.)  Legalism was enthroned by the Qin Shihuangdi Emperor (ruled 221-207 BCE), who was the great unifier of China in everything from land to language to weights and measures and, in addition, built most of the Great Wall of China.  The Qin Emperor tried to wipe out Confucianism, with massive book burnings and slaughter of scholars.  And, under his rule, the idea of collective responsibility was made a permanent part of Chinese law:  if you committed - or were accused of - a crime, your entire family, perhaps your entire clan, was shamed, arrested, tortured, and/or killed as deemed appropriate by the authorities.  After all, if they had raised you better, you'd never have become a criminal.

Collective responsibility may seem extreme, but when you think about it, it's universal.  Privately, who would want to be the relative of the Unabomber?  Arial Castro?  Ted Bundy?  There are all sorts of people wrestling with the shame of having a family member in prison.  (For that matter, even in our enlightened age, there's a whole range of things, like mental illness and addiction, that still carry a stigma, and not just for the sufferer.)  And then there are the "good wives" who stand by their man (and, I'm sure, also "good husbands" who stand by their wives, though they don't get the press), and nowadays have to defend that decision... 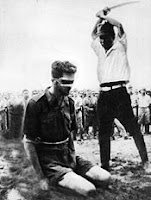 And then, nationally:  How long will the Germans be guilty for the Holocaust and WWII?  What Germans who were alive at that time could claim innocence?  How about the Japanese during WWII, with comfort women and concentration camps and Unit 731?  What level of culpability do the people of a nation hold for that nation's acts?  And for how long?  Is there an expiration date on slavery, or war, or genocide?

Cruel and unusual punishments:  what's the definition?  Was the 17th century idea of execution for everything, including stealing a handkerchief, excessive?  Is no death penalty unbelievably soft?  (Norway, for example, reinstated the death penalty to execute Vidkun Quisling and other WW2 Nazis, and then promptly re-abolished it.)  Today the United States is the greatest incarcerator and last Western country with capital punishment (some states with an express lane, others abolishing it)...

It all depends on whether you think people are capable of rehabilitation or not.  If people are born bad, well, why not kill criminals?  If people are born good, though, and we do not pursue rehabilitation (turning, for example, to for-profit prisons) what does that say about what we really believe?  Or are willing to do?  This isn't about history, it isn't really even about crime:  it's about philosophy.  What we believe.
Posted by Eve Fisher at 00:01