(After a month-long hiatus it's nice to be back. And I don't regret skipping one of my turns in the least!)

While wrestling with the middle of my current WIP, and putting in some hard work to keep up the tension and the plot moving along during the portion of the book that by many accounts is most likely to be where "the doldrums" can set in, it occurred to me that there's one tool in the writer's toolbox that frequently gets misused.

But when it's done wright, it can work wonders character exposition and moving plot along.

Because regret is a foundational emotion. It undergirds and enhances other emotions. Envy, fear, sorrow, guilt, even greed, are all made more palpable, more vivid by being coupled with well-demonstrated and carefully delivered (by the writer) regret.

Take one of the touchstone pictures of the 20th century, Casablanca. If ever a story was about a mountain of regret, and how it drives the actions of the characters within the framework of the narrative, it's Casablanca. The trick is in the nuance.

We all know the "Of all the gin joints in all the towns in all the world" scene where Rick Blaine drunkenly demonstrates his profound regret at having loved and lost Ilse Lund. And the next day when he's sober he expresses regret what he said the night before while drunk.

For her part, Ilse is the definition of regret. It fuels her guilt and indecision at loving loving two very different men.

Her husband Victor Laszlo regrets not being able to guarantee his wife's safety, to the point of asking Rick to take her with him out of town, because "I want my wife to be safe."

Even Captain Renault, the calcuating French collaborationist prefect of police allows regret to work on him to the point where he betrays his own instincts and throws in with Rick, who has just shot and killed the top nazi in Casablanca.

Director Michael Curtiz, better know for his command of light and shadow that of his ability to get the most out of his actors, nailed the nuance here. His command of just how much to show and how much to let simmer below the surface is dead on. It's one reason why Casablanca has remained a classic for so many years.

And it all comes down to one word.

Today's question for the readers: how much regret is too much for you? Whether you're writing it or reading it, at what point does a character stop being interesting and start seeming like a whinier version of a Woody Allen protagonist? 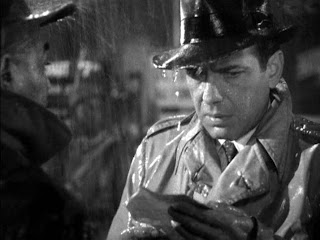 Posted by DoolinDalton at 01:48