First in a Series

Let's say you've been writing for a while. You have some stories out there. You're comfortable with what's familiar in your writing, but at the same time you like the excitement and challenge of something new. You know if you continue with the same familiar characters in your series then you have a certain amount of baggage to carry forward, which also means you need to find new ways to insert the same old background. This process can become tiresome and take the fun out of writing. So now you're wondering what to do for your next creation.

Why not start a whole new series? You get the fun and excitement of working with new characters and inventing new plots to get them involved and moving right along. Plus, by the time you write the second story, you get the best of both situations; you have these new characters to collaborate with and you have the comfortable feeling of being familiar with them, yet there is still room for them to surprise you with what actions and reactions they may have to the next conflict coming up in their lives.

Everybody generates story ideas differently. There is no right way, only the way that works best for you. Sometimes I start with research for a setting, sometimes with a character who then gets into a situation, sometimes with a scene in search of a character, and rarely, with an ending in search of a story. Sometimes my idea gets a one-page plot line from opening to climax (those usually have a higher percentage of being completed) and sometimes the idea gets a mere start in writing, which may then take up to several years of ripening before finding an ending.

Here's how I came by the latest series.

For years, reports crossed my desk about on-going politics, intrigues and battles in the mountain jungles and poppy fields of the Golden Triangle located in Southeast Asia. I had also kept some clippings from English language newspapers out of Thailand and Hong Kong concerning events in that area of the world. It appeared to be an interesting and fertile backdrop for potential stories. Then, a few years ago, our neighbor who runs a Chinese restaurant made it a practice to come out to our table, if he wasn't too busy, and talk Chinese history with me. Since his English was not the best, his wife sometimes had to translate the discussions from Mandarin to English. One advantage for me was that he could Google a person or historical event from the Chinese viewpoint of history and I then got a translation. Turns out that facts and viewpoints of parties involved could vary.


The Next Story Characters

There were many different opium warlords with varying political ties who vied for domination of the opium trade in the Golden Triangle during the 50's, 60's and 70's. One real life warlord who stood out was known as Khun Sa, but then he had several names. His background, name and birth varied depending upon who wrote the facts. Most agreed he came south out of Yunnan Province when Mao's Red Army defeated the White Army Nationalists during China's civil war. Many of those White Nationalists, also known as the Kuomintang, who didn't go with Chiang Kai-shek to take over the island country of Taiwan, moved south into Burma and Thailand where they became involved with the opium and dragon powder trade. After all, a standing army has to do something if it is to survive in a foreign country while it is cutoff from the motherland. In this case, crime paid very well for whoever had the men and weapons.

Khun Sa was alleged to have had a Chinese wife, a Shan wife or maybe both. This provided fodder for my story characters. What if an opium warlord had a son by each wife and the sons were now vying to become the heir apparent? The half-Shan son would have the edge with the local Shan hill tribes and that portion of his father's Shan Army, while the full-blood Chinese son would have the edge with that portion of his father's Kuomintang Army remnants. One son would be raised in the jungle camps of the Shan State in eastern Burma, while the other son attended British private schools in Hong Kong. Therein lies the instant clash of culture and education. Ready made conflict, you gotta love it for storytelling.

Told from the Point of View of the well educated, full-blood Chinese son, the reader watches that son's attempts to adapt to the jungle life he has been thrown into after the death of his mother in Hong Kong, and observes how he rationalizes his actions for survival while trying to overthrow his half-breed Elder Brother. But, Elder Brother has his own agenda to become the next warlord. And, if the current warlord and his two sons aren't careful, there are several rival groups with their own reasons to remove these three from the playing field. 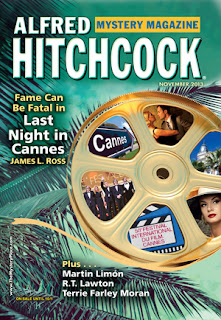 He was late.
For two days now, I had squatted back on my heels in the damp greeness of this mist covered jungle slope like any hill tribesman would with my thighs resting on the back of my calf muscles and an old French rifle across my lap. The rest of my squad lay fanned out in concealment on the slope, smoking black market American cigarettes and digging in their packs for rice balls wrapped in banana leaves. But, I could also hear occasional rustling in the brush and whispers of complaint as they grew restless.

And so the first story in the Shan Army series begins. The second ("Elder Brother") and the third ("On the Edge") manuscripts are currently setting in AHMM's slush pile. It is now in the hands of the editor as to whether this becomes a series like my other four in Alfred Hitchcock, or this one remains as a standalone story.

Got any ideas for a new series on your own part?

PS ~ Thanks to Rob Lopresti for his critiques on all three stories. I sometimes suspect that my way of writing occasionally drives him to distraction, him being more on the literary side of the scale, while I'm more on the telling-stories-to-friends-in-a-bar type of guy. (Come to think of it, I still owe Rob a beer from our meeting at Bouchercon in San Francisco.) Anyway, I also believe that some of Rob's suggested revisions/corrections have bettered the quality of these stories. Seems like it never hurts to get that one more informed opinion before sending off the latest brain child to fend for itself. So thanks, Rob, for hanging in there.
Posted by R.T. Lawton at 00:01