The Truth shall set thee free

For at least the past half century, clerks and bureaucrats offer consumers the excuse “It’s not our fault, the computer made a mistake.” As a computer specialist, I know that behind a mistake is another human and the proffered excuse is an attempt to mitigate or evade responsibility. It’s not that computers are infallible, but they do what people tell them to do.

Friday morning I was listening to CNN pontificate about the Edward Snowden affair. Their hostess pointed out that people either believe he’s a hero or a traitor. I’m not sure this reflects political leanings but the guest on the left took the position Snowden’s a betrayer whilst the guy on the right claimed Snowden’s a patriot. I never did hear anything of importance from the guest in the middle, but my mind may have tuned out following an amazing, jaw-dropping, mind-numbing statement: The NSA apologist (the guy on the left of the screen) said something to the effect we can’t so much blame NSA’s crimes on people, because these crimes are committed by computers. 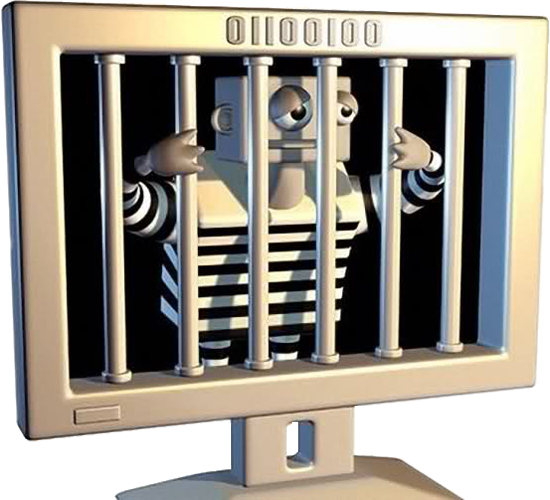 Going back to my opening paragraph, computers do what people tell them to do. In centuries past, defendants might have tried “Your Honour, t'were me fourteen vicious dogs wot ripped apart me wife’s paramour all on their own selves,” or “It were an accident pure and simple, Judge. Me horse reared up and clopped the landlord on ’is head.”

But blaming computers, it’s like saying:
Fortunately, we crime writers seldom bring up the computer-ate-my-homework excuse, else without humans, we’d have little to write about. Imagine the detective’s dénouement: “Based on the prints, I determined the digits are digital and the bite marks are bytes. Yes, the culprit is the CDC-6600.”
Posted by Leigh Lundin at 00:00