How 2 Big Sleeps Taught Me Magic 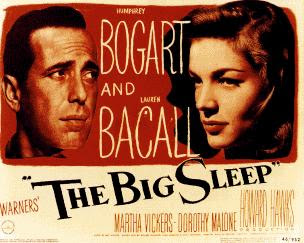 Two weeks ago, I mentioned that I’d seen the “pre-release” of The Big Sleep.

The film classic The Big Sleep was released by Warner Brothers in August of 1946. However, an earlier, slightly different version of this same film was completed about a year before that. This earlier “pre-release” was granted limited distribution for USO use in the Pacific Theater as WWII wound down. Virtually no one would see it again, though, for over a half-century.

Warner sat on that original version of The Big Sleep because they wanted to unload a back-log of WWII films before they became passé, and because Lauren Bacall’s agent wanted to change elements of his client’s performance in The Big Sleep, in order to counter negative reviews she’d received in a recent film.

Thus: Warner re-edited the movie, including about 20 minutes of new footage shot during the film’s year-long hiatus, before releasing the final version -- which is the classic we all (or, at least, many of us) know and love. Meanwhile, that original “pre-release” version -- long believed lost -- was found, late in the 1990’s, sitting in the UCLA Film and Television Archive. Almost immediately, funds were raised for restoration, and a re-release was planned for the “pre-release,” which finally came out on video in 2000.

Which is how I happened to stumble across it one night, on a DVD, when I myself was feeling a bit cross-eyed from lack of rest. And, how I realized that a comparison of the two films served to illustrate an important facet of writing for me.

In honor of the multi-layered-mystery element that (imho) helped propel The Big Sleep to greatness, I’ll begin my dissertation by invoking a different famous mystery film, which also starred Humphrey Bogart.

If memory serves me right: In The Maltese Falcon, while Peter Lorre’s character, Joel Cairo, is supposedly cooling his heels outside Sam Spade’s office door, Bogart (Spade) lifts Cairo’s card to his nose and sniffs. A humorous expression instantly explodes across Bogart’s face as he exclaims, “Gardenias!” He turns to his secretary and tells her, “Quick, darling, in with him!” (Or words to that effect.)

The way this scene is played out, a viewer is left with little question concerning Joel Cairo’s sexual preferences. Or, so it seems to me.

A similarly telling scene from the pre-release of The Big Sleep was cut from the 1946 version. At the same time, Marlowe’s search of Geiger’s bungalow -- where Carmen Sternwood (played by Martha Vickers) has been drugged and photographed -- is considerably shortened.

In commenting on my last post, David Edgerley Gates mentioned that the Hayes code (a sort of de facto censorship in operation at the time) made it necessary to change the film’s ending. He also helped explain why the changes in the Geiger bungalow scene were made, when he wrote: …[T]hey already had enough problems with the Martha Vickers character, trying to skirt the implication she was a nympho, not to mention a dope fiend.

I think David's very right. While the book makes it plain that Carmen is photographed in the nude, for instance, Martha Vickers is clothed in both versions of the film. All be it, she’s clothed in a Chinese-looking garment, which -- given social nuances then in vogue -- may have been construed as indicating her photo session involved sexual deviancy. But, there’s more sexual obfuscation than this going on.

After first reading this scene in the book, there was no question in my mind that Geiger was gay. Chandler’s description of Geiger’s bedroom clearly indicated its owner had a strong feminine side, at the very least. And, I’m pretty sure Chandler just about came right out and stated the fact when Marlowe described what the place felt like.

The final cut of the film, however, seems largely to gloss-over this idea. Though, I believe an argument could be made that love would be about the only motivation for Geiger’s assistant to go on his murderous rampage at Joe Brody’s apartment.

But, in the pre-release it’s a different story. After Marlowe finds the drugged Carmen Sternwood, he searches Geiger’s bungalow pretty thoroughly before he manages to discover the lockbox with Geiger’s sucker code. We even see where Marlowe finds the key to that box (a scene that I believe is missing from the final release). And, he goes to greater lengths, when it comes to covering up evidence that the girl had been in the bungalow.

During all this, we get a very good look at the feminine side of Geiger’s bedroom. The femininity is not overdone, but many of the book details do seem to be there. I believe this element, combined with the Chinese or Asian decorative influence, would have connoted the Geiger’s leanings fairly plainly to an audience of 1945. And, for anybody who somehow still missed the implications, the knowing smile on Bogart’s face, when he sniffs one of Geiger’s handkerchiefs, which he finds in that bedroom, would probably open the dimmest eyes.

Yet, almost none of this appears in the general release. Most of it wound up on the cutting room floor during final editing. And, while conforming with the Hayes code may well have played a part in deciding to make these cuts, I suspect another reasoning was also at work.

At first blush, Marlowe’s longer search made a lot of sense to me. To my way of thinking, mysteries are all too often replete with detectives who find what they’re searching for far too easily. So, it was refreshing to see Marlowe search for awhile before locating any valuable clues. Additionally, I remember thinking, “So THAT’S where it came from!” when he found the key to the lockbox, because the origin of this key had never seemed clear to me when watching the general release.

But, my excitement soon waned. I began to notice how long that search seemed to drag on. And, how such a lengthy search slowed the movie’s pace. Before long, I found myself changing my mind. I decided the editor had been wise to cut it -- even if the results left me puzzled about where Marlowe got that lockbox key.

A moment later, icy dread washed down through me.

I’d made similar mistakes in some of my own writing. Seeking to ensure verisimilitude, I’d been guilty of letting details stretch scenes too long. During rewrite, I’d noticed a resulting loss of tension, but my understanding of the mechanism involved was pretty sketchy. Watching this scene, however, and comparing it to the original film in mind, I was struck by a clear and concrete comprehension of the problem.

The solution, though, was still difficult to grasp. How to balance verisimilitude with the need to avoid slowing the action? Another difference between the two films would provide a key. 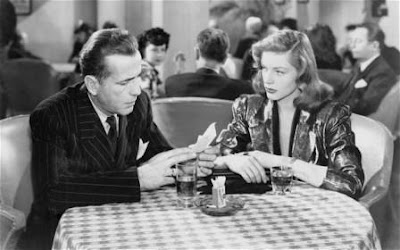 There’s a scene in the pre-release that I believe runs about five minutes, and I don’t think it’s in the ’46 release at all -- though there may be a short minute or two that was re-shot to condense it. The stuff that wound up on the cutting room floor was replaced with a new scene, in which Bogart and Bacall enjoy a bit of a tête-à-tête in a restaurant (left), helping to establish a romantic rapport that serves to support the re-edited ending.


In the deleted scene (below) Marlowe meets with his cop buddy, the DA and some other guys, in the DA’s office. There, the PI has to explain why his actions, and letting him remain involved in the case (so he can continue to pursue those actions) would further the interests of justice, and the DA’s reelection. This scene was evidently intended to function as a thinly-veiled attempt to ensure that viewers understood the implications of what had transpired on-screen before it. This mid-film review, however, serves to bring the film’s brisk pace to a near screeching halt. And, it’s much worse than the lengthy search scene above, because there’s nothing new here; it’s all a rehash. 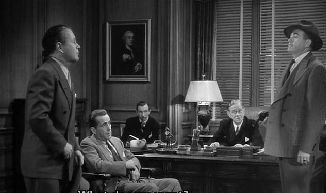 While I’m sure there are those who would appreciate this opportunity to gain a better understanding of the complicated double-or-triple-mystery unfolding before them: For me, the confusion created by unexpected occurrences within the film, is exactly what sucks me into the vortex of the plot’s wildly spinning fabric. In my view, this “review” scene provides such a vast breath of calm, still air, the film’s whirling vortex shatters against it, dissipating. Wildly careening plot elements flutter free and drift down to flop dead upon the ground.

Eventually, I came to see this scene as being somewhat akin to a magician stopping mid-act to say, “Okay. Now see, this is what I’ve really been doing.” When a magician reveals the slight of hand behind the trick, all the magic goes out of the thing. It dies.

Which is why I’m glad I saw this, because there's enough dead writing in this world; I don't need to kill more of it. But, I’m a guy who drives himself nearly crazy, ensuring that ta reader can understand why my characters are motivated to do what they’re doing, because I don’t want folks getting lost, or tossing down a book or story because they think I’ve got a character doing something s/he wouldn’t. On the other hand, I also know it’s important to keep a reader in the dark sometimes, and this why I found this scene so useful.

It serves as a clear reminder that the line between what I can tell and what I have to keep up my sleeve is clearly demarcated by the question, “Will knowing this shatter the magic?” At the same time, I realized this was also the answer to the question: How to balance verisimilitude with the need to avoid slowing the action?

The answer -- for me, at least -- is to keep my eye on the magic. If the magic thrives throughout the action, it’s fine. If it dies, or even just dies-down, I know it’s time to cut.

The trick in both cases is: Keep my eye on the magic. This phrase might not seem terribly concrete to you. Or, perhaps you’re not the sort of writer who needs to bear it in mind. But, for me: The simplicity of that phrase is something my mind can grasp and hang onto deeply. It’s a tool I can carry with me anywhere I go

Keep your eye on the magic! That’s what I learned from watching two versions of The Big Sleep..