The Reins of Narration


by Dixon Hill
Perhaps you’re like me, and you sometimes find yourself wrestling with a story or novel that has developed an explosive side-tension which threatens to derail your plotline. Sometimes, this is a good thing. On other occasions, however, you may want to continue to explore the plotline you’ve already established, but can’t quite figure out how to quell the raging tension you’ve stirred up in the wrong location. If you’re like me in this way, and you’ll bear with me through what may at first appear to be a bit of meandering, I believe you’ll appreciate and enjoy learning about a discovery I recently made, which may help to address this specific type of problem. 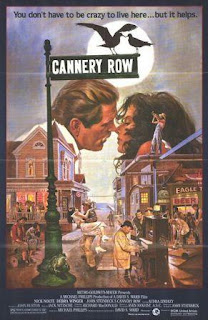 When I think of “Narration” my mind usually leaps to two recollections before all others.

The first thing I tend to recall is the voice of John Huston when he narrated the 1982 film Cannery Row, based on John Steinbeck’s books Cannery Row and Sweet Thursday. I wasn’t a Steinbeck lover back then. I’d read some of his stuff, but couldn’t seem to gain any traction. John Huston’s film narration changed all that. 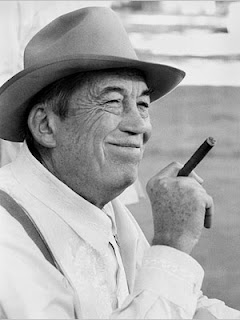 Suddenly, within the deep timber of Huston’s voice, I heard what I’d been missing -- that little “twisted-lemon rind” of humor that tinges so much of Steinbeck’s work. It renders his prose in a tart life-giving flavor, the way a bit of rind or an olive enlivens certain cocktails. Thanks to John Huston, I learned to love Steinbeck, and -- odd as this may seem -- through this experience, I also came to love Hemingway. 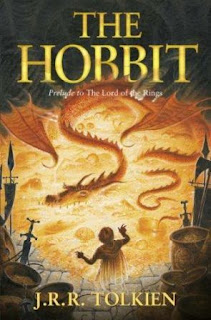 And, for some reason, recalling John Huston’s narration always conjures memories of The Hobbit in my mind. The Hobbit is a novel written in a format that clearly mirrors the inflections of an ancient oral tradition. Read aloud, it sounds like the sort of story that’s been verbally passed from one generation to another, verbatim, so that a storyteller many generations down the line recites the words as if s/he were present and personally saw the events described as they happened.

Yes, the voice of the narrator can have a great impact on a story: setting the tone, establishing a cadence, pulling a reader in deep, or serving to hold the reader at arms length if needed.

I knew the power that a narrator can have. I believed I understood that power. As, I suspect, we all do.

However, prior to two days ago, I’d never realized how the age of a narrating character might permit a fiction author to rein-in extremely powerful – or even potentially overpowering -- aspects of a storyline.

As I’ve noted before, here, many mysteries -- both stand alone and series -- contain an element we might call the “Lone Rider”: a person (usually male) who roams the countryside seeking solace for a yearning heart.

The Lone Rider is a searcher. His past has left him emotionally scarred, or perhaps with a psychological void that he longs to fill. He’s like an anthropomorphized puzzle-piece doomed to wander about the table, looking for the spot in the puzzle where he fits -- the piece he’s designed to click into. The forever-missing piece, which could fill that hole gaping in his side.

When well-handled, the Lone Rider plotline introduces an instant sense of mystery (Who is this person and where did he come from?), a tingle of danger (Is s/he bad or good?), and an inverse sense of the “Call of the Wild” (inverse, because the protagonist is usually led by a call from his Wild or lonely existence, into Civilization and connection with fellow wo/men). In the very best case, the story achieves a transference of this “yearning feeling” from the protagonist’s heart into the reader’s.

In the series format, we usually follow the Lone Rider. Every time he spots somewhere he might fit, he stops and tries to click-in-place, but something prevents him from achieving success. These attempted fittings, and the obstacles overcome during the resulting course of events, comprise the episodes of the series. They make mighty fine reading, at times, and -- when handled well -- can result in major authorial success, such as the Reacher series.

In the stand-alone version, the reader usually meets the missing puzzle-piece element (the “set piece”) first, then the Lone Rider appears and the plot kicks-in in earnest. Because the reader often encounters the people and place where the Lone Rider is going to try to fit in, before encountering the rider himself, additional tension can be garnered -- such as sexual tension, when the reader wonders if the rider will become romantically entangled with a certain set-piece character. Overall tension may be greatly increased, as the reader tries to forecast the incoming rider’s impact on the carefully balanced little “ecosystem” already established.

I’ve read quite a few Lone Rider-type books and stories, both stand-alone and series versions, because I tend to enjoy them. But, I’d have to say that few could match, and none exceed, the one I read earlier this week: Jack Schaefer’s Shane, first published in 1949. 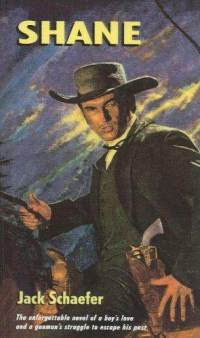 This is the Lone Rider’s name.

He arrives in a Wyoming valley in the summer of 1889, a valley in which farmers have staked-out and homesteaded on land claims where a large rancher used to run his cattle. The rancher has obtained a contract that will require the use of the land now occupied by the homesteaders, who don’t want to move.

This much of the plot was probably well-worn, or even worn out, by the time the novel was written.

Schaefer introduces an element, however, that charges the novel with a power surge on the quantum level. That is to say, it infuses the novel with a force that is not immediately apparent to the eye, but is none-the-less all-pervasive and even subtly dictatorial in nature.

Instead, the narrator’s voice is that of Bob Starrett -- after he’s grown, and (one gets the idea) is perhaps now an old man -- telling us how he saw things transpire when he was a young boy. That’s important. The narrator is not a young boy, incapable of understanding why certain elements he doesn’t understand need to be brought to light, which can lead to confusion on a reader’s part. Nor is he just an adult, fully versed in the nuances of sexual desire, human greed or lust.

The genius of Schaefer’s narration, is that the old man tells us the story as he saw it, through the eyes of a young boy. This permits him to sometimes let the reader know that he, as a boy, knew there were undercurrents going on that he didn’t understand, but it relieves Schaefer of having to explain those undercurrents -- without ignoring them.

What do I mean?

Well, for one thing, this odd narrative juxtaposition results in one of the most fascinating literary experiences I’ve ever encountered: when love blossoms between two heterosexual men as they work in concert to pull a large tree stump.

Described directly, like this, it sounds ridiculous perhaps, certainly somewhat melodramatic. Yet, the scene, as written, is vital, virile, beautiful – full of sound and fury, and signifying EVERYTHING. The two men grow to love each other in the bond of friendship, as Shane comes to a personal understanding that farm work can actually provide the sort of challenge he knows that he needs in life, if he’s to enjoy living.

The scene lasts for thirteen pages. In the beginning, Shane works alone, feverishly chopping at the stump’s roots with an axe. But, soon, Joe Starrett works with him, chopping at the roots on the other side of the stump. Neither of them speaks. They just keep working like fury, sweat pouring out, axes ringing against ironwood, stopping only to sharpen their blades or to eat.

During all this, the boy, Bob, watches for awhile, then tries to go play, because – on the surface, at least – watching two men spend hours pulling a stump is tedious and boring. So, Bob wanders off. He tries pitching stones across a nearby stream, he tries to do other things. But, the hidden undercurrent of what’s taking place at the stump keeps drawing him back, magnet-like. He can’t stay away, but as a boy he can’t understand why he’s so fascinated by what’s transpiring.

The adult, narrating what he saw as a boy, however, can deftly tell us: “I simply could not grasp how they could stick at it hour after hour. It made no sense to me, why they should work so when routing out that old stump was not really so important.” And, he can describe finding his mother spying on the two men through a barn window, displaying behavior that clearly indicates she has become excited by watching them -- very probably sexually excited. And, when he describes helping his mother in the kitchen as “the steady rhythm of double blows” carries clearly to where mother and son sit, we realize her libido is very definitely aroused by the mysterious and exciting stranger who only recently appeared at their doorstep.

The boy understands none of this. The adult he has grown into, however, understands it all. And, telling the story through the eyes and ears he had as a young boy, he can render the story in a manner that makes it very clear to the reader that Mrs. Starrett is smitten with Shane, and later becomes torn between her passion for the mysterious and exciting stranger, and her love for her steadfast husband and young son -- all the while using the boy’s perception to keep a firm lid on the burgeoning psycho-sexual tension, as well as the fear and jealousy of potential cuckoldry.

And, the reader understands, as the boy does not, that it’s the love between the two men, which holds Shane in check. Shane’s philia (as the Greeks might put it) for Joe Starrett is what keeps the love triangle from possibly morphing into another dimension -- a dimension with the potential to destroy everyone involved.

All of this creates a tension so great, it could hijack the plotline, if the narrator weren’t relating the story as he experienced it when he was a young boy.

And, this is what I learned by reading Shane. Which, by the way, is a darn good story!