Chipping Away the Stone 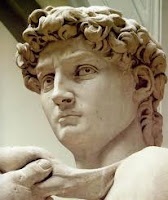 Everybody knows that Michelangelo, widely accepted as the greatest sculptor ever, explained how he created his magnificent marble statues, including the David and the Pietà, by chipping away the stone until only the form imprisoned within remained. Writers, at least those who know that every first draft needs some revision, go through a similar process. 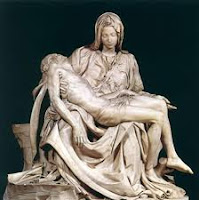 Instead of quarrying the raw material, they create it by putting words together in a form determined by the mysterious process we call creativity. In fact, what writers initially do with words is much like what sculptors in clay do: building up one small bit at a time until a rough form is achieved.

After that, how sculptors revise a clay figure is a combination of of building, removing, and smoothing. We could say that writers do that too. But recently, after many years of writing, I think I’ve reached a new level of ability to critique my own work, and it feels more like chipping away the stone to reveal the story pared down to its essence, containing not one wasted word. At least, that’s the goal. Not being Michelangelo, I never achieve perfection. But the process feels much the same.

When I first joined Sisters in Crime’s Guppies chapter with the first draft of my first novel burning a hole in my computer, among the first pieces of advice I heard were these:
If I had followed all these dicta immediately, I might have sold my first mystery a lot sooner than I did. Or maybe it was meant to take the time it took to learn by my mistakes. I was so excited about my manuscript that I couldn’t wait to send it out, so I experienced many rejections—and got many good suggestions—before it got published in a form far different from that original first draft. I did join a critique group. I understood what “kill your darlings” meant. But for a long time, I couldn’t do it. Every clever phrase and carefully chosen word was so precious to me. How could I take any of them out, even in the interest of a tighter story? And not only my attachment to them, but also the fear that my creative well might run dry at any moment, prevented me from revising as ruthlessly as the material needed.

I know exactly when the shift took place: in 2006, during a three-week writers’ residency with Edgar-winning author SJ Rozan, who builds rather than chips (she used to be an architect) but doesn’t waste a single word. (I’ve said before that her prose is built like a brick you-know-what. Read her novels, and you’ll see.) Some time during the second week, she said, “Liz, you need to give us less, not more. Two clever lines in a paragraph are enough—three or four are too many.” I went back to my room and took another look at the manuscript I was working on. What I needed to cut leaped off the page before my eyes. I could suddenly see the difference between the shape of the story and the bits of literary marble I could chip away.

Writing short stories has accelerated my ability to chip. As a rule, the first draft is the story I need to tell, which I write without thinking about how long it’s going to be or leaving out anything that needs putting in, whether it’s plot, characterization, dialogue, or setting. Sometimes they need a lot of revision, sometimes not so much. And depending on my motivation for writing the story, eg for submission to a particular market, I may need to abbreviate a particular story. Seldom do I have to extend it. The most recent story I’ve written was on the way to becoming a first draft of 2,800 words when I realized I needed between 3,500 and 7,000 words to submit to the anthology I meant it for. But rather than continuing on and then padding, I thought through a structural improvement—three encounters between the protagonist and the antagonist instead of just one, building tension with each one—that made the story organically longer.

So just as I’m an into-the-mist writer (I hate the term “pantser”) rather than an outliner, I’m a chipper rather than a padder. I’m particularly proud of a recently published work that started life as a substandard 70,000-word novel and ended up as a tight, funny 20,000-word novella from which a lot of the adverbs and, I hope, all the preachiness had been purged. If I say so myself, that’s some chippin’!
Posted by Elizabeth Zelvin at 00:01